Prior to moving to the West Coast, I had little need for a car because I walked and / or took public transport to work (or a cab if I was lazy, back in the days when you could hail a cab on the street).  Thus I typically invested the minimum amount I could in a reliable car that could fit 4 passengers with a full size trunk and also squeeze into a narrow parking garage.

The cars that “fit the bill” for me were the older model Nissan Altima which I drove for a decade and then a Jetta which I picked up in 2011.  Each of these cars cost about $17,000 “out the door” and contained a reasonable level of equipment (the Altima was my first car with air bags, the Jetta was my first car with ABS and traction control) – they weren’t completely stripped down models with manual transmission, for instance.  These cars have both turned out to be highly reliable autos – and the old Nissan Altima is still driving today, almost 20 years later, as a starter car in my extended family.

The average age of a car on the road today is 11.5 years (nowadays you don’t even have to “link” to sources – Google just brings in the data from Wikipedia as a search response when you ask a common question) and that seems long to me.  For every new car on the road, for instance, there is a late ’90s model still driving to offset it in order to get back to an average of 11.5 years.

My theory today is that the total package of “functionality” or “value” that you could obtain from a new Jetta for $17,000 would be comparable to autos that cost far more for 99% of the scenarios in which you would plausibly use that auto.  These scenarios include 1) commuting to work 2) running errands around town 3) going on a trip and putting luggage in the trunk.

That’s not to say that there aren’t scenarios where it doesn’t make sense to have a more powerful or capable auto.  In Oregon we went to visit a friend who lives up in the hills and I had 4 people in the car and gravel had been newly laid on an uphill slope (which, as it turns out, means that it is very slippery).  As a result our car couldn’t make it up the hill and we slid sideways into a ditch and had to have a friend hook up a rope and give us a pull from their big pickup truck to get us back on the road.  If I lived up there, for instance, then this car would be completely inappropriate.  But that isn’t a common “use case” for my auto. 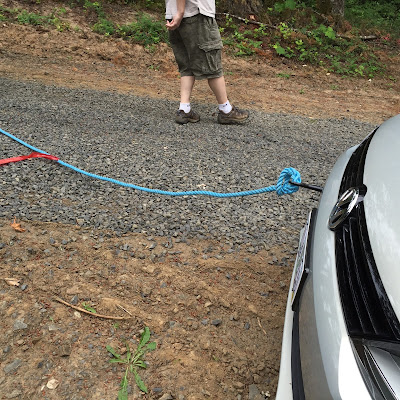 When you look at the “true cost” of owning an auto, there are a lot of factors to consider, and whole web sites to calculate it in various ways.  Instead, I am going to make the general statement that if you buy a new car at around the $17,000 price point and drive it for perhaps 7-8 years before selling it you are probably going to pay about $150 / month for that car (net of what you receive on resale).

Given the increased reliability of most new cars, you get a 3 year warranty on virtually all cars (5 years from some manufacturers) and you should be able to make it to the end of 7-8 years without any major expenses (> $1000 or so).  This is a significant benefit of buying a new, modern car and it should not be under-estimated.

These new cars also generally get higher mileage than the older cars they replaced.  While gas now is closer to $2 than the $5 that it was at peak, this will also make a big difference across the life of a car.  You can spend $1000 more on gas (depends on all circumstances, but this is a reasonable number) for an older model car with worse mileage than a newer model that can get probably 30 mpg in a reasonable commute.

Finally – the cost of financing (and to some extent, insurance) increases with the cost of your car.  The less you spend on the base car itself, the lower will be your total payments on interest and insurance.  Parts and maintenance will also (generally) cost less if you are involved in an accident or need to make repairs.  Ever try to get a BMW fixed at the dealer?  You aren’t walking away without spending $1000. Try it and see (I did when I had a used 740).

There may be some skepticism – can you really buy a decent NEW car for $17,000?  VW’s brand (but not the cars, themselves, unless you are buying a diesel) has been so damaged by recent scandal that you can absolutely do it.  This Jetta which is reasonably well equipped (i.e. it isn’t a stripped down manual shift without power windows that the dealer usually uses as a “teaser”) is selling for around $14,000. 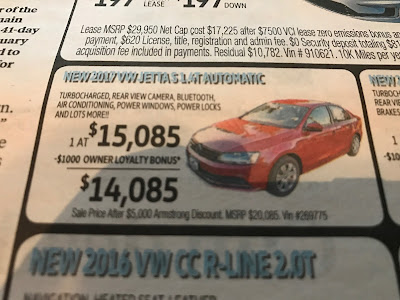 Thus I believe that there is a COMPELLING financial case for upgrading cars that are many years old and buying a basic, reasonable new car at around the $17,000 price point with modern features, high reliability, and solid gas mileage.  A new basic car also is likely to be far safer than the car it replaces given that the average car is 11.5 years old so even an expensive car back then won’t have all the features that a base car would have today.

So let’s assume for the sake of discussion that I’ve made the FINANCIAL case and that it makes sense to buy a new $17,000 car for basic tasks and drive it for 7-8 years and then sell it and get another one.  Then the question becomes

Why don’t most people follow this sensible advice on how to purchase a car?

There are many reasons why most people don’t follow this advice.  First of all, I think that most people have a low sense of financial literacy and don’t understand that buying a car based on the monthly payment (and not taking into account all the factors I’ve laid out above) is a bad decision making model. Cars are not an asset for 99% of people, they are a liability, or they are essentially owned by the bank.

Cars are also marketed very well.  You can’t turn on the TV without seeing an advertisement for cars (especially when I am forced to watch live TV during a sporting event, for example) and they are rarely advertising the lower-end basic models I am discussing in this post.

There is a lot of false differentiation between brands.  Modern cars (I’m not talking about cars from the ’70s to the 2000s) are almost all the same in most important ways, at various price points.  Advertising and ego help to drive very minor functional and visual differences and also drive this net, irrational behavior.

Autos are also tied to ego and self-worth.  There is a common perception that someone driving an expensive or fancy car is more important or richer or “cooler” than someone driving a basic Jetta. Watch any music video for the clearest representation of this phenomenon.  This is likely reinforced by marketing (above) and the fact that cars are often sold based on their monthly payment (also tied to low financial literacy, above).

Thus we are in a situation where 1) people buy more expensive cars than they need 2) cars stay on the road longer because we are in a cycle where it is too expensive to buy a new one 3) the “net” of this is that we have less efficient, less safe cars on the road (when you remember that the average age is 11.5 years) overall than if we stuck to buying more efficiently and less about ego.

What is the impact of all this?  The impact is significant.  As a whole we spend much more than needed for cars and have worse outcomes.  For many people, a car is a very significant expense all-in and is one of the areas where you can improve your financial situation by making intelligent choices and exercising self-discipline in the face of a media blitz and your own ego.

23 thoughts on “Autos and Disruption”