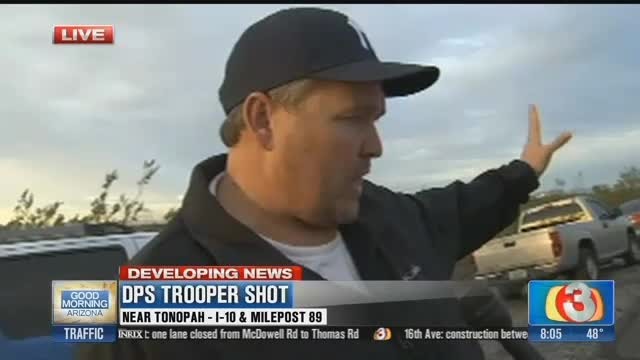 I posted a bit on the role of the individual and terrorism last year.

We are a week from the Trump inauguration and there are all sorts of threats by the left to disrupt the inauguration.

What can individuals do ?

Tomorrow, my wife and daughter are going to drive to Tucson where we have bought a new home. They plan to leave early and about 10 AM will be passing the Tonopah turnoff on the way to Phoenix. Yesterday, there was quite a bit of excitement there.

According to Col. Frank Milstead, the director of DPS, the trooper was responding to the shots fired call when he came upon a single-vehicle rollover wreck near Tonopah. A woman had been ejected from that vehicle.

The trooper immediately stopped and began laying out flares.

DPS Capt. Damon Cecil said the trooper — a 27-year-veteran of the agency — was ambushed by the suspect when he got out of his vehicle at the scene of the rollover. The trooper was shot and wounded.

Milstead, speaking from the hospital to which his trooper and taken, said an “uninvolved third party” who was driving by saw the trooper grappling with the suspect and stopped to help, eventually shooting and killing the suspect.

That civilian, using the wounded trooper’s radio, was the one who alerted DPS to the shooting.

“To the civilian on the DPS trooper’s radio, if you can hear me, I need you to let me know where the suspect is that got in an altercation with our trooper,” the dispatcher could be heard saying on the scanner.

“The suspect is … occasionally breathing or stirring. He’s been shot by a passerby,” the man with the wounded trooper’s radio calmly responded. “He’s laying right next to the officer.”

Arizona has been an open carry state since it was a state. The chief of the Department of Public Safety said his trooper would not be alive but for the passerby with the gun.

I am leaving a state that has become horribly corrupt since I first came here in 1956. I have much higher hopes for Tucson where we will be living after Monday.

It has been a hassle but I have high hopes for the new place in Tucson.

I am taking all my guns. California is Chicago with good weather. My niece who is a nurse at Rush medical center has a friend, another nurse with metastatic breast cancer but still working. Yesterday, leaving work, she was held up. She told the gunman, “Go ahead and shoot me, I have nothing to lose.” He robbed her but did not shoot her.

8 thoughts on “You are the someone.”