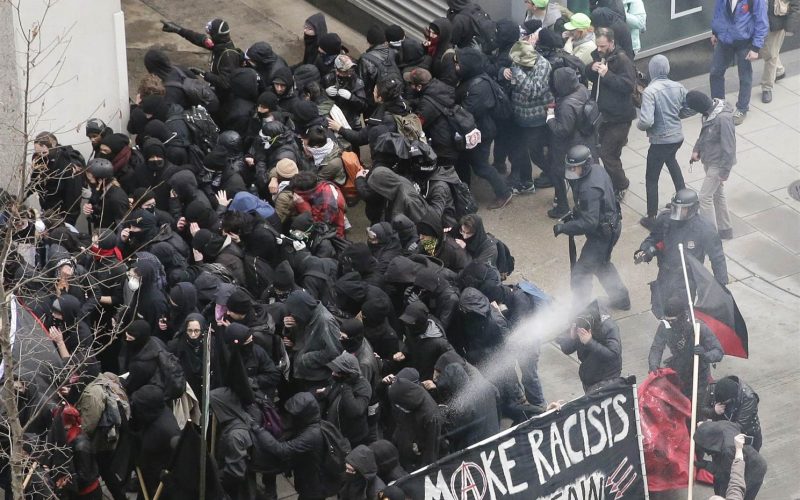 It has been frustrating to see what appear to be professional rioters destroying property and injuring innocent people, with no visible attempt to arrest or stop their depredations.

A word should be said on behalf of Berkeley students. I am convinced that the violent rioters were not students from the campus, but were organized outside agitators from off campus that exploited the event. Most students today, even my left-leaning students (I have quite a few in class), were angry about what had happened, as they resented having their protest hijacked by thugs, and the victory it delivered Milo, who is the Kim Kardashian of political theater. Instead of speaking to 500 people in an auditorium last night, he spoke to perhaps 4 million on TV. I think the net present value of the protest to him, in increased book sales and media market value, is at least $1 million—probably considerably more.

That may be comforting to think the riots are driving people to Trump and the political right. But what about the rioters and those supporting them?

The FBI may be investigating the Mayor of Berkeley for supporting the rioters and discouraging police intervention.

Whoever, with intent to cause the overthrow or destruction of any such government, prints, publishes, edits, issues, circulates, sells, distributes, or publicly displays any written or printed matter advocating, advising, or teaching the duty, necessity, desirability, or propriety of overthrowing or destroying any government in the United States by force or violence, or attempts to do so; or

Shall be fined under this title or imprisoned not more than twenty years, or both, and shall be ineligible for employment by the United States or any department or agency thereof, for the five years next following his conviction.

Will this work ? Maybe we need better intelligence about who these people are.

There are a few groups working on it. One is called “Operation HYPO>

In order to gain trust, we found that the best thing to do was to be aloof and skeptical with regard to the plans and activities of the groups and to be independent and outspoken when plans were being discussed in our presence. Most of the details associated with “direct actions” were not discussed with anyone other than the group of individuals assigned to carry out the specific task. In the groups that I was assigned to penetrate, there were plenty of blowhards thumping their chest about something they had done that demonstrated their skill and ability to participate or lead. Most of this was hyperbole, but the newer members would eat it up like young soldiers listening to the inflated heroics of a platoon member that had only been with the unit a month longer than them. We all know the type.

Some of this resembles Richard Fernandez article about “You are the Someone” who does something about a problem.

What is to be done? The first task is to start gathering a circle of friends who live within walking distance of your home. Four people — a handyman, a nurse or doctor, an ex-cop or soldier and a strongback for preference — will do. Your second task is to support the causes you care about. Volunteer at your church or club. If you have no club, start one. Donate to your favorite website. If you don’t have a favorite, find one or go online yourself. Buy the book of an author you admire. And switch off the damned telescreen.

Or, you could endanger yourself to try to learn what these groups are about.

In my migration from group to group, I found that political ideology was a significant factor in the determination of what types of activities the groups would sponsor; ranging from sit-ins to marches to direct action. I can broadly classify these ideologies as liberal socialists, communists and anarchists.

The liberal socialists are primarily coming out of our higher education system. They are comprised of professors, students and under-employed graduates. They are primarily white with a roughly equal split between male/female. They are not militant. They are willing to conduct blockades, marches and sit-ins.

The communists are a much broader spectrum of society with a strong leaning towards immigration issues. The communists actively recruit from a wide pool of candidates, including liberal socialists, the LBGT community, the environmental activists and the anti-white racist groups (Black Lives Matter, La Raza, Islamic Fundamentalists, etc.). They have a significant number of minorities in their ranks and they are militant in their operations and planning.

Then you begin to reach the insiders that are planning these incidents. That is more dangerous.

The anarchists are by far the most dangerous of these groups. They are organized like militias. They actively train and practice their operations. They have discipline and zero tolerance for weakness. They have a number of former military personnel providing expertise to enhance security, logistics and martial arts capabilities. The majority are physical fit, military age males. They are primarily white with few minority members. Their leadership tends to be either former military, a proven leader from the occupy movement or a highly educated alpha-male. They are far more capable than their recent activities would demonstrate. They have formed community defense organizations and are idolized for their willingness to take action from the other groups discussed above. They are however anarchists that despise communism as much as they despise capitalism. They see patriots and constitutionalists as their primary enemy. To them, everyone is a NAZI or a fascist unless they are an anarchist.

But who pays for these people ?

Of the major police departments we have worked with, Cleveland, Philadelphia and New York City were by far the most responsive. These departments appreciated the information we provided and took affirmative action to prevent property damage and violence. The Police Departments in cities including Portland, Seattle, San Diego, Chicago and Cincinnati were receptive to our reports but faced political pressure that may have undermined the overall effectiveness of our efforts. The police departments of Baltimore and Washington DC were severe disappointments. In every case except for one where we reported plans that could result in damage or injury, these departments took no preemptive or preparatory actions.

The following video provides a good example of our inability to motivate the Washington DC Police Department.

The Police are often politicized in cities controlled by the left.

James O’Keefe is also working with these people although it is very dangerous. He also did some secret recording of leftist activists before the election.

The left, of course, is trying to link O’Keefe and by implication, Trump to inciting riots.

The counter-sting, carried out by The Undercurrent and Americans Take Action, a project of a previous target of provocateur James O’Keefe, managed to surreptitiously record elements of O’Keefe’s network offering huge sums of money to progressive activists if they would disrupt the ceremony and “put a stop to the inauguration” and the related proceedings to such a degree that donors to the clandestine effort would “turn on a TV and maybe not even see Trump.”

O’Keefe counters that the video does not show what it purports to show.

According to The Daily Caller, OrganizeJ20 accused Project Veritas of trying to set up one of their organizers, Ryan Clayton. The Daily Caller reported that, “Last week, a group called The Undercurrent released video of an O’Keefe operative meeting with Ryan Clayton, an activist with the group Americans Take Action. The Undercurrent said that the O’Keefe operative was trying to set up Clayton by showing him accepting money in exchange for blocking bridges during the inauguration.”

The Undercurrent is a project of American Family Voices, an umbrella organizations backing progressive liberal policies and claims to be, “at the forefront of developing new message ideas and strategic initiatives for the progressive cause.” Their funding appears to come mainly from labor unions as well as from organizations linked to George Soros.

No doubt the arguments will go on but I hope the FBI gets involved in investigating the anarchist rioters and their support network.

11 thoughts on “What, if anything, is being done about the rioters in Berkeley and elsewhere?”