For this Anniversary,  please see these two previous 2013 and 2014 Chicago Boyz columns on D-DAY —

History Friday — Books to Read for the D-Day 70th Anniversary 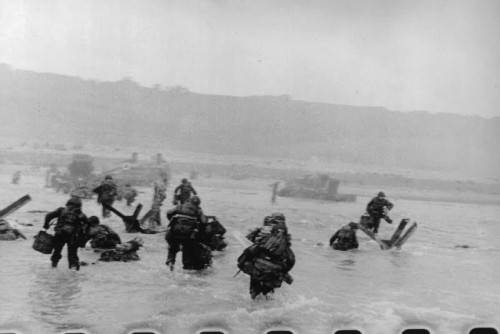 Men of the 16th Infantry Regiment, 1st Infantry Division, rush toward the shelter of amphibious tanks at the water’s edge of Easy Red sector, Omaha Beach, on D-Day, June 6, 1944. Left and right in the foreground are M4 Sherman tanks with wading equipment. The troops in the photo, expecting weak defenses, are loaded down with food and equipment for several days of combat. Most of which was discarded on the beach in their desperate fight for survival. Source: Britannica Online for Kids, http://kids.britannica.com/comptons/art-40275