UPDATE: Greg Cochrane is doing chapter by chapter discussion of the Reich book so I will just link to his discussion. This week it is the chapter on India.

On the whole, people from North India have more ANI ancestry, while people in southern Indian have more ASI ancestry. The proportions generally range from 80% ANI to 80% ASI. There are actually a few populations that are close to unmixed ANI (Kalash) or unmixed ASI (tribal populations in South India such as Palliyar, Ulladan, Malayan, and Adiyan). Groups that speak Indo-European languages typically have more ANI, while those speaking Dravidian have more ASI. Populations (including castes) with higher social status generally have more ANI ancestry. The Y-chromosome and mtDNA patterns show that ANI contributed a disproportionate fraction of male ancestry, while ASI accounts for the great majority of female ancestry – again, much like Latin America.

The Y chromosome suggests male ancestry in a situation where the male conquerer mates with female conquered tribes.

The Brahmins have the highest proportion of ANI or Indo European genetic material.

I don’t know how many here are interested in this but the new book by David Reich may prove to be as revolutionary as Murray’s “The Bell Curve”.

I’m reading the new book, “Who We Are and How We Got Here”.

It is about ancient DNA which is now being identified and studied. I have been interested in this topic since reading “The 10,000 Year Explosion”, which is about evolution and DNA but it is ten years old. One of the authors, Greg Cochran, has a blog, and has been reading and commenting on the Reich book.

Another interesting sidelight to this story of how ancient populations moved and replaced forbearers, is the role of Yersinia pestis, the plague organism.

Three pandemics have been attributed to plague in the last 1,500 years. Yersinia pestis caused the third, and its DNA was found in human remains from the second. The Antiqua biovar of Y. pestis may have caused the first pandemic; the other two biovars, Medievalis and Orientalis, may have caused the second and third pandemics, respectively. To test this hypothesis, we designed an original genotyping system based on intergenic spacer sequencing called multiple spacer typing (MST). We found that MST differentiated every biovar in a collection of 36 Y. pestis isolates representative of the three biovars. When MST was applied to dental pulp collected from remains of eight persons who likely died in the first and second pandemics, this system identified original sequences that matched those of Y. pestis Orientalis. These data indicate that Y. pestis caused cases of Justinian plague. The two historical plague pandemics were likely caused by Orientalis-like strains.

Now, the DNA of Y pestis has been found in remains of ancient skeletons, that suggests it might have been responsible for the replacement of ancient farmer by the nomadic Yamnaya people.

The Paleolithic farmers and hunter gatherers were replaced, somewhat like American Indians were replaced by Europeans.The Indians had been isolated from Eurasia for 10,000 years and had lost their immunity and gained no immunity to new diseases that had evolved in the Old World. As a result, they died of diseases like smallpox and measles that they had not been exposed to. The Paleolithic population might have encountered a new disease carried by the invaders from the Steppe.

Late last fall, I reported that scientists had discovered a European ghost population. This group of people then referred to as the ANE, Ancient Northern Europeans, was a previously unknown population from the north that had mixed into the known European populations, the Hunter-Gatherers and the farmers from the Middle East, the Neolithic.

That discovery came as a result of the full genome sequencing of a few ancient specimens, including one from the Altai.

Recently, several papers have been published as a result of ongoing sequencing efforts of another 200 or so ancient specimens. As a result, scientists now believe that this ghost population has been identified as the Yamnaya and that they began a mass migration in different directions, including Europe, about 5,000 years ago. Along with their light skin and brown eyes, they brought along with them their gene(s) for lactose tolerance. So, if you have European heritage and are lactose tolerant, then maybe you can thank your Yamnaya ancestors.

They also had domesticated the horse and used wheeled carts, both huge innovations. 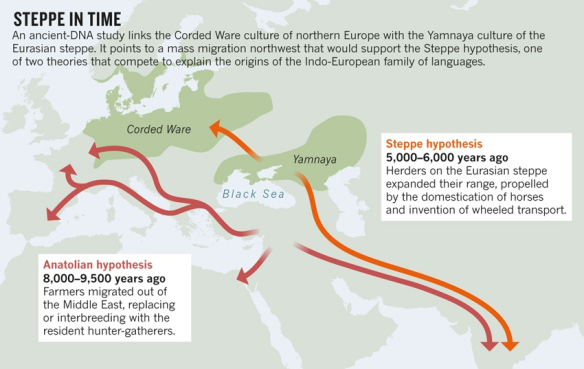 They may have been the ancient Scythians referred to by the Greeks. The preceding population of Europe may have been more easily replaced because they had been victims of Y pestis plague, making an even more ancient example of the power of this organism to change history.

Deep prehistory was always complicated: we just didn’t know much about it before. Ancient DNA analysis is the path forward.

I will add more as I finish the book. He is now discussing the differences between China and India. If anyone is interested, I will do more on this as I finish.