Remember the “White Nationalist”demonstration in Charlottesville in 2017? Many have forgotten but the trial of the driver who killed a “Democratic Socialist” demonstrator is going on now.

Why are the news media not reporting? Why do we have to read “Russia Today” articles about it?

Maybe it is not going well for the left ?

Fifteen months after the now notorious Unite the Right rally (UTR), James Alex Fields is finally having his day in court.

Fields is facing a slate of charges including first degree murder for crashing his Dodge Challenger into a crowd in downtown Charlottesville two hours after UTR was forcibly disbursed by police. He was arrested minutes after the incident, denied bail, and has been imprisoned ever since. He has also been charged with federal hate crimes, for which he will likely face prosecution next year.

Who is he ? The “Unite the Right” group is on trial.

the outcome will affect several other key cases. One such case is Sines v. Kessler, a sprawling civil suit brought on behalf of 11 plaintiffs against every key figure and organization who participated in UTR. The suit is being argued by two New York-based law firms, Boies Schiller Flexner and Kaplan Hecker & Fink, whose ethnic composition is worth noting. The suit alleges that UTR attendees conspired to commit violence because of “hate,” “racism,” and other species of badthink. The Fields trial will also likely affect the trials of four UTR attendees who were recently arrested in California and accused of “conspiracy to riot.”

Testimony for the defense is going on.

On Aug. 12, 2017, a “Unite the Right” rally in Charlottesville turned deadly when a 20-year-old Ohio man allegedly accelerated his car into a crowd of counter-protesters, killing 32-year-old Heather Heyer and leaving 19 others injured, five critically.

Now, some of the same right-wing groups involved in those events in Charlottesville are planning another protest to coincide with the anniversary this weekend. Virginia Gov. Ralph Northam and the city of Charlottesville declared states of emergency ahead of this weekend’s anniversary. The governor said in a press conference Wednesday he will allow agencies to call in the National Guard to assist in security efforts.

That was ABC at the time. What does the defense say ? First the Prosecution.

The prosecution isn’t pulling any punches. The facts are not on their side, so they are going in for maximum emotional effect. During her 20-minute opening statement, Senior Assistant Commonwealth’s attorney Nina Antony stressed the gruesome nature of victim’s injuries, and suggested that Fields had premeditated the whole thing, mentioning that three months before UTR, Fields had posted an image of a car running into a crowd of people on Instagram. “Fields was here in Charlottesville with anger and images of violence fixed in his mind.”

Hill did provide some useful details about Fields’ activities and interactions in the two hours between the time when UTR was forcibly (and illegally) dispersed and when the car crash happened. Fields left Lee Park by walking west–the safer way–and returned to the UTR staging ground at McIntyre Park. He went back to his car at the McDonald’s up the road (presumably this one). At the Shell gas station across the street, he met three other UTR attendees, who needed to get back to their cars, all parked in the still-dangerous downtown. Fields volunteered to give them a lift back to their cars. Dropping them off, Fields and his new acquaintances resolved to meet up later for lunch.

Next: a rifle toting leftist testifies.

The defense called Dwayne Dixon, an “anti-racist activist,” to testify about his actions that day, and about a Facebook post, in which Dixon claimed that he had used an AR-15 rifle “to chase off James fields from our block… before he attacked the marchers.”

He also testified that he brought two magazines, but that he kept his rifle slung across his chest. When Fields’ car passed, shouted “Get the fuck out of here.” He also said he saw a number of vehicles with “white nationalist insignia,” but that Fields’ Challenger did not have any such markings.

Dixon is a key piece of the defense’s case. They must argue that Fields had no other route out of Charlottesville than to go through the Antifa mob that was moving toward him, and that Dixon was instrumental in preventing him from his only other course of action.

Another key defense, Philip Depue, testified yesterday. Depue, a digital forensic scientist said that, based on his analysis of data extracted from Fields’ phone, Fields had entered his Ohio hometown into Google Maps less than three minutes before the crash. The app presented Fields with two routes out of town, neither of which included heading south on 4th street, the route he would eventually take (green arrow in graphic below): 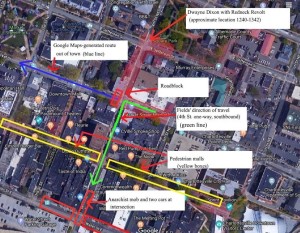 The app suggested that Fields continue west on E Market Street or turn around and head east. However, the first route would mean making an illegal u-turn and heading back into an area where Dixon had been loitering. The second route was likely obstructed by a roadblock, as can be seen from police helicopter footage from approximately 15 minutes before Fields came to the intersection:

Maybe it was not intentional. That has been an issue since the incident.

Trapped, he attempted to drive through the crowd at 17 miles per hour. But when he came within meters of the crowd’s main body, his car was hit hard by two people with sticks.

He then accelerated, and hit Heyer at 23 mph, while simultaneously hitting a stopped car in front of him. He then switched into reverse, and several of the crowd attacked the back of his car with sticks and bats. He reversed a block and a half and fled.

I doubt he will be acquitted. This is a local jury and the judge is strongly pro-prosecution, having denied a change of venue.

The lackluster defense might prevent the prosecution from getting everything they want, but Fields will likely face years in prison. Not one anarchist has been criminally charged. Such is justice in Charlottesville.

I don’t know what to think about this case but, it is not a clear case of murder.

6 thoughts on “Remember that “White Nationalist ” rally where a woman was hit by a car and killed?”