THE WHITE PASS AND YUKON RAILROAD

Recently I was in Alaska for a vacation. The trip was great. In the town of Skagway, which is a big destination for cruise ships, is a narrow gauge railway called “The White Pass and Yukon Railroad”. This railway was built in 1898 for the Klondike gold rush.

The railway carried freight for many years and was a significant component of the effort to fortify Alaska in the 1940s when it was under threat from the Japanese in WW2. After the war it was used for civilian purposes.

The rail way shut down in 1982 and was re-opened in 1989 as a tourist railway, taking passengers from Skagway (at sea level) up over the mountains and into Canada. We took the railway up and over into Canada and had a great time. The railway has restored cars that were purchased from other (now defunct) railway lines, some almost 100 years ago. They even have an original steam engine that they keep running and take out on Saturdays (I was told, didn’t see it) so the true “train buffs” can actually ride behind a narrow gauge steam engine (it is number 69 and they sell T shirts for it, probably a big seller due to the double entendre). 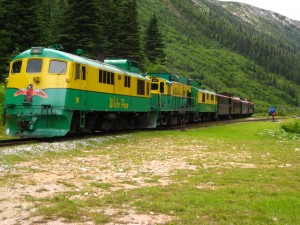 Being the strange individual that I am, the question that immediately leaped into my mind was the amazing feat that it was to build this railway. The railway was financed through a consortium at the end of the 19th century, and it was quite a risky proposition. After the financing was raised (over $10M), the train ended up paying for itself before it was even completed on the tolls that it earned bringing up supplies for the miners as the track was being laid to the various points up to Canada.

The train was built in a bit over 2 years, with obviously just technology available in 1898, which had some machinery, blasting, and a lot of “by hand” work. If you take the train it is obvious how difficult the tracks would be to lay – the ground is difficult and the grade is steep and often they had to blast it directly off the side of a mountain (later some tunnels were added). They say that 35,000 workers toiled at the site and 30 or more were killed. Here is a link to the company site regarding the history of the railroad.

No matter how you slice it, this represents some amazing project management and execution. The train went from the drawing board (literally, no computers or GPS back then) to completely being built, in a bit over 2 years. The workers had to be brought to the site, housed and fed – Skagway is a very small town and it boggles the mind to think of where these tens of thousands of workers lived and how they were taken care of. All materials had to be shipped to the site, stored, and then passed up the train to the railhead where the workers toiled. All of these items had to be coordinated and tracked and put into sequence or the job would have failed.

Don’t forget – this is in Alaska, and much of the construction went on in the dead of winter. Even today when I was in Skagway in July it was in the 50s and rainy; these were presumably the “best days” you could hope for. I can’t imagine the wind and snow at the passes in the dead of winter like December or January; plus there is the fact that daylight is very short in the winter.

“This article overviews the early literature of modern project management, which began with writings about the nature of work organization and the use of teams to accomplish tasks. PERT/CPM techniques arose in the context of large defense systems procurement in the 1950s. Lt. General Bernard A. Schriever, the ‘father of modern project management,’ is credited with creating and applying the concurrency concept to the Atlas intercontinental ballistic missile weapons system. Although Gantt charts, documented by Henry Gantt in 1919, remained a popular scheduling method prior to World War II, computers vastly improved scheduling methods beginning in 1959. The early and mid-1960s saw more thought devoted to the use of project teams and the monitoring and coordination of resources. John E. Mee introduced the ‘matrix’ organizational approach in 1964, and by 1968, the matrix organization concept was well established.”

The interesting element is that mere documentation of what had to exist for projects such as the White Pass and Yukon Railroad, elements such as detailed planning, contingency planning, and considering various scenarios, is treated as new insight.

Project EXECUTION has been going backwards for years now; can you imagine building a railway in two years? You couldn’t even get permits for a new railway in less than a few years, and then building would take many more years to come.

While I was in Alaska I picked up the local paper and read about plans for a runway expansion at the Juneau airport; the need for this expansion was noted in the 1999 master plan, and it was just starting the approval process in 2008, NINE YEARS LATER. Here is an article from the local paper on the expansion and delays.

The number of projects that are faced with delays and reduced scope are legion – a classic is the “Big Dig” in Boston – here is a wikipedia link to the sad story of this project, with immense delays, cost overruns, poor quality (“thousands of leaks”), and deaths.

If you view projects on a series of dimensions:

All of our public projects have plummeted since the “modern” era of project management has begun, on all of the above dimensions except safety. It takes years (decades, even) to do the simplest project, and as a result costs skyrocket. That railway was built over ONE HUNDRED years ago and still runs today… I can assure you that the “big dig” will have long since been abandoned while that railway is still ready for action.

The point of all this isn’t to say that the past was better or that people today are stupider; this plainly isn’t the case. However, we have to recognize that public projects are a calamity compared to even ONE HUNDRED years ago, and many of the public projects that you see couldn’t even be contemplated in today’s environment.

Our discussion today shouldn’t be a pat on the back for our modern management and use of computers; it should be a somber reflection that on almost every dimension (except safety) we are accomplishing a fraction of what people were accomplishing decades or over a century ago.

Whether you blame the regulators, lawyers, business, or someone else – the question is the same – we need to sit down and figure out how to do it better. “Modern” isn’t better in this case.

(note – I also have a movie posted at LITGM of the train, didn’t post it here due to space)

6 thoughts on “Skagway and Project Management”