There was a problem asked on the first version of the Mega Test, something like “What is the maximum number of discrete spaces one can create from three interpenetrating cubes.” I tried to visualise this one for a month, and even had a go at trying to make one out of toothpicks, but gave up and guessed.  I am 99% sure I got it wrong, but I don’t remember what I answered. 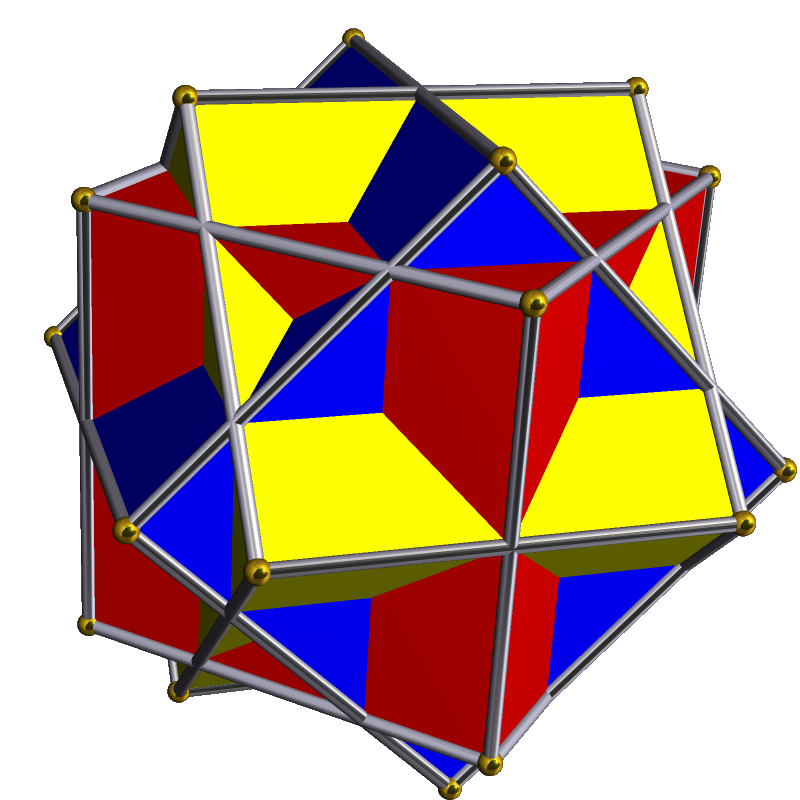 By The original uploader was Tomruen at English Wikipedia. – Transferred from en.wikipedia to Commons., CC BY-SA 3.0, Link

I learned  about a year ago that the figure has been used in some discussion by a mathematician named John Skilling.  I keep looking at it and thinking I get it, then it slips away.  Unsurprisingly, MC Escher used it in a drawing, because of course he did. It is the most notoriously difficult problem on the Mega Test, which used to be used by the ultra-high IQ societies to sort amongst the highest scorers.  I used to correspond with test designer Ron Hoeflin, who describes himself as a Schizoid Personality Disorder, and I believe it. Even among the highest scorers on the Mega, those who got over 45 out of 48 or better, less than a third got this one right. As I had already taken the test years ago and am not allowed a retake, I didn’t think it would be cheating to scour the web to see if I could suss out the answer. The most common answer is 72 discrete spaces, which seems logical: 24 corners each intercepted by two planes, 24 x 3 = 72.  Apparently that is wrong.  The answer is greater than 68, however, because some determined SOB built one of these suckers out of rods and colored cellophane and then counted and got to 68 definite and answered that. He wondered if he might have missed at least one.  Apparently even when you’ve got a hard model it’s had to keep track. He concluded he got it wrong from his returned grade and the subsequent discussion by email among people who had qualified  for the highest society. He now thinks the answer must be 69. Ron’s not telling.  One of the very few people who have gotten a 47 or the person who got a 48 must also know.

The parallel question on the other side of the test is 5 interpenetrating spheres. On both problems I fooled around with the idea of solids of differing sizes, but concluded there was no advantage in creating discrete spaces that way.

This was part of my eventually learning that I am not exceptional in my spatial intelligence, though it took me a long time to learn and admit that.  You can have a go at the answer, but I can’t confirm if you got it right or not. For myself, I would like an explanation why 72 is not right, because that makes the most sense to me.

8 thoughts on “Compound of Three Cubes”