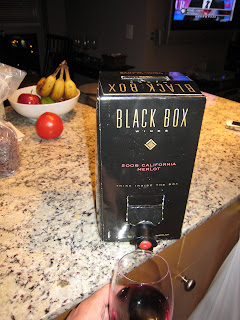 I am blessed in that I live very near (stumbling distance) to the mega-liquor store Binny’s in River North. Binny’s has every variety of wine and beer known to man (except they don’t stock Trumer Pils) and at reasonable prices, too.

For Christmas someone gave me a wine stopper that you can “pump” the air out of the bottle with and it seals the bottle back up so that it keeps indefinitely (well, I don’t know how long indefinitely is because we typically drink it over a few days, but long enough). This isn’t the one I have (mine is plastic, better if you drop it on the ground a lot) but you get the idea

. We also have a little 6 bottle wine refrigerator that we received and keep in the kitchen – this way we can keep the wine at a reasonable temperature (around 60 degrees or so) which means that it is cool but not cold.

With all of these technological upgrades, I have been purchasing more upscale wines, to boot (especially now since the red wines keep longer). I have been buying Pinot Noir in the $30 / range, which buys you quite a nice bottle of wine at Binny’s (something that would cost you $70+ at a restaurant).

Just for grins I was going on a trip and I asked the clerk at Binny’s what the “best box wine” was in the house. He took me over and pointed to the “Black Box” series of wines as he grimaced at my question. I selected the Merlot (which I don’t usually drink) for $16 and off I went.

The box wine came in a 3 liter box. This is exactly 4 times the .75 (750 ml) bottles of wine that you buy on the shelf. The box was surprisingly compact – certainly it is more efficient to purchase wine this way (if all else was equal, which it isn’t).

The wine also had a tap, like a mini beer keg. That was a cool feature, which would facilitate pouring and is a lot easier than opening each one with a corkscrew (or screw cap nowadays). This would also eliminate the need for a pump stopper like the one I received as a gift.

Before we started drinking it, I did a little math. Since the box contained the quantity of four bottles of wine, at $16 the cost per bottle was $4. OK, that is kind of scary when you think of it that way, you are near Boone’s Farm territory. Even factoring the element of savings due to the fact that the box was small and compact (easy to ship, cheaper than 4 glass bottles) this was a bit scary.

One time I remember hearing a comedy sketch by someone is that there is nothing worse than getting a lot of cheap crap… I think the line was something like “get 3 short sleeve suits at K Mart for the price of one” or the famous line from that old Ted D*nson movie “Cousins” where the old uncle says “I’d rather have a case of the clap than a case of this wine!”

That is what leaped to mind as I swirled the Black Box around in my glass. It had kind of an eerie odor, and it wasn’t good. My friend Elton said that if you start out on it and get used to it – it isn’t so bad – but it was a nasty come down. Now I feel sorry for him because I abandoned that whole box in his apartment where it will surely be drunk at some point in the future.

I don’t know anything about the wine “process” and I remember the big scrum over whether a cork or screw cap was better. I do know that if they ever put some decent wine in a nicely packaged box like this it would go over well in an outdoors party situation (maybe for the in-laws). And it sure as heck was efficient to carry and pour. Too bad it was…

a box of trouble

16 thoughts on “Box of Trouble”