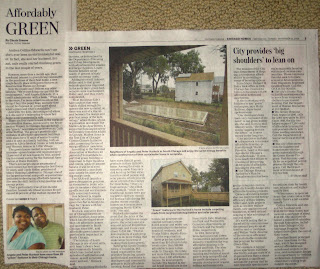 When I first started working after college I was an auditor for a “Big Six” public accounting firm. Through the (bad) luck of the draw, I was assigned to work on utilities and government institutions. Since utilities are distributed across the United States geographically (unlike finance which is concentrated in New York, for example) I had to travel across the midwest in order to serve my clients.

On one of my first trips I sat next to a couple, a mother and a young son. After a while we started talking a bit on my way to Sioux City Iowa (to see Iowa Public Service, which has since been bought up by Berkshire Hathaway as part of MidAmerican Energy). They asked me why I was traveling to Iowa (a good question, actually) and I said that I was an accountant working for the local power company. The child piped up and said:

“Are you the man who turns off the power?”

The mother was embarrassed and we immediately changed the subject but clearly their family had their power cut off for non-payment at some point in the past and that is how the child knew of the power company. We had some stilted conversation from then on but the encounter has stuck with me for years.

If you ever work at a power company (gas, electric, water) you can see the difficulty that the poor face in trying to pay their bills. Unlike other bills (credit card, banks, etc…) if you don’t pay your power bill, they will cut off your service. There are rules that the utilities can’t cut you off in the winter (so you don’t freeze to death) but you can bet that come spring they will be out there turning off the juice, so to speak. Not only that, but if you are a poor credit risk they make you put down a deposit. Once when I was a renter in a tony North suburb of Chicago they made me put down a cash deposit before they’d hook me up; just by being a renter I was tarred as a bad credit risk.

This article, “Affordably green”, is from the Sunday Chicago Tribune. The article is full of smiling families about how green technology is being applied to all kinds of income levels.

The one line which stuck out to me, however, was:

The price of electricity, gas, and water is not “progressive” like the income tax. Every household pays the same rate for use, whether you are rich or poor. On a per-unit cost basis, the poor actually pay MORE than other types of users because large volume industrial or commercial users receive a discount due to their purchase volumes. For gas prices at the pump, the cost is the same for everyone, and particularly damaging to those living pay check to pay check.

Not only that, but the grants that fund all these non profits usually come from cities, counties and governments. How do they pay for this? Tax revenues, and utility taxes make up a sizable portion of their take from the public. Look at any utility bill and you can see that it is riddled with tax after tax, and you can’t even see the impact of other taxes levied on the utility (property and sales taxes) because these are built into the rates.

Thus I would love for all those doe-eyed environmentalist believers to go to a utility and volunteer THERE at the customer service window for a while and watch the poor decide whether to pay the power bill or buy medicine. They can watch people decide on back to school clothes and supplies or the gas bill. These are real choices, and they will become more and more evident should the economy go into a spiral.

There are no two ways about it – 17% of the income of the poor goes to energy bills which are VASTLY inflated by taxes and regulation, without which the cost of energy would probably be 50% lower (or more… we are the “Saudi Arabia” of coal). Think of this next time they volunteer at a soup kitchen or go on a clothing drive… couldn’t they accomplish the same exact thing by working to lower the costs of energy for the poor so that they’d have more income in their pocket?

8 thoughts on ““Are You The Man That Turns Off The Power?””