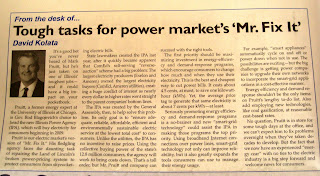 The Citizen’s Utility Board or “CUB” is a non-profit group that represents the consumers of the state of Illinois against the interests of the electric, gas and telecom utilities. Their web site is www.citizensutilityboard.org and I recently joined their membership ranks so now I see their periodic newsletter. David Kolata is the Executive Director of CUB (his photo is on the article, above).

CUB was started in the mid-80’s. While there are many elements to CUB, the most relevant was their opposition to the big electric rate hikes that ComEd (now Exelon) was pushing through in the 1980’s, as their giant nuclear plants, plagued by cost overruns, came on line.

How the “rate setting process” works is that the utility will come forward and request a hike in rates, as well as the changes in rates by customer classes (business, residential, etc…). The Illinois Commerce Commission (ICC) typically decides whether or not the rate hike will be allowed and how much of the utility’s request to grant. CUB was established to represent the citizens of the state and generally this means fighting to keep the rate increase as small as possible. Typically the utility asks for $100M, CUB says give them nothing (or they owe us a refund), and then the ICC makes a decision somewhere along the continuum.

Utilities are a local monopoly so they need some sort of process for setting rates else they could essentially charge whatever they’d like (there is no competition). In practical terms, very high prices encourage customer “substitution” such as is occurring today when high gas prices are impacting behavior (driving less, selling less SUV’s, taking public transportation), so their pricing power isn’t unlimited, but it would be very large unless constrained by the state.

In addition to fighting on pricing, the utilities also often provide poor service. Since they are a monopoly, you can’t “drop” ComEd if you are a residential consumer so without pressure from groups like CUB the utility could pretty much operate with relative impunity, although the ICC would certainly step in if the situation was dire (i.e. blackouts). 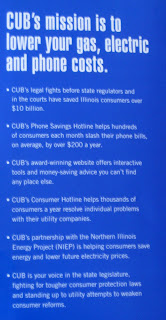 I like the above message that describes what CUB is supposed to be about:

“CUB’s mission is to lower your gas, electric and phone costs”

This is a great mission – however, the mission is getting caught up in politically motivated issues. For instance a recent newsletter says that “CUB gets ‘green’ to save you green”. Per a recent article:

“So our money-saving mission is the same, but now we have a powerful new weapon in the fight – energy efficiency”.

While energy efficiency is always a good thing, all else being equal, it isn’t clear how energy efficiency saves in customer bills. The best thing for consumers is having cheap, base-load power, coming from coal or nuclear plants. These plants have the lowest marginal cost of producing energy. Gas fired plants, on the other hand, are subject to fluctuations in the cost of natural gas, and often “set” the price of power which is done based on:

Demand on a given day – at the point where supply is offered – the cost at the point where demand = supply, the price of THAT megawatt per power sets the rate for the entire pool of power. Thus if demand can be set using base load power, the rate is far lower than the demand rate that would be set for natural gas.

As far as efficiency, it is a good thing, except that it costs money. Want to install real-time meters – well who is paying for that? There are 1 million + customers in ComEd’s service territory – if these meters costs hundreds of dollars each (plus installation labor) who is going to fund these efficiencies – why the distribution utility, of course, which in turn is paid for by consumers.

CUB is scared to talk about new generation because it is politically incorrect to do so, so it is looking at the next best item (but unfortunately it is far less “good”) which is conservation. But if CUB really wanted to stick to their mission, they’d focus on adding base load capacity for coal and nuclear plants (Illinois has plenty of coal reserves and more nuclear plants than any other state in the nation, so this isn’t as much of a stretch as it seems).

Just don’t hold your breath on that.

CUB should change their mission to

“Doing what sounds politically correct while ignoring the core problems of not building new power generation.”

This is sad because CUB has done a lot of good for Illinois, acting as a check on the power companies who were often ill-managed and who had the regulators in their pocket. But now they can avoid the real problem and dance around on the margins, while Illinois uses up its spare capacity and heads towards spiraling power costs.

6 thoughts on “A Letter to David Kolata at CUB”