Note: The graphs in this post may require an administrator to be made visible, which I have requested. In the meantime, those graphs and more are at the link. (I take it back. It looks like they came up first time!)

I wrote early on that there would be errors in both directions in the Covid count of deaths, that some might be called C19 that could be better attributable to another condition, and some ascribed to flu or pneumonia that were really coronavirus. A couple of months ago, when the drumbeat started that there were all sorts of deaths being called Covid that really should be called something else, I repeated that claim of errors in both directions, but noted that our numbers were more likely an undercount than an overcount, largely because some places require a confirmed diagnosis of C19 before it can be put down as a cause of death. This was unpopular in some corners. As reports of more suicides crept into the news, more attributable to lockdowns than to other explanations (isolation, loss of employment, anxiety) I likewise cautioned again: wait  for the data.  Do not speculate on why something has happened until you know that it has actually happened.

Please note, this is true for other countries as well.  Everyone seems to have excess deaths, and it is difficult to measure how many at present. There are different problems in counting in rural vs urban areas.

I think it is now fair to say that the C19 deaths officially reported are a severe underestimate, not an exaggeration. The numbers from this Lyman Stone thread are pretty devastating in that regard. The excess deaths from all causes are in tandem with Covid spikes and recedings, not lockdowns. That is, where there are more C19 deaths, there are more excess deaths as well. This doesn’t leave a lot of room that they could be anything other than unrecorded Covid. The exception is “external causes,” which would include homicides, suicides, drug OD.  Those are down, not up, though there may be some change in those numbers as more complete reporting becomes available. But there would have to be lot to move that red line above the covid line. 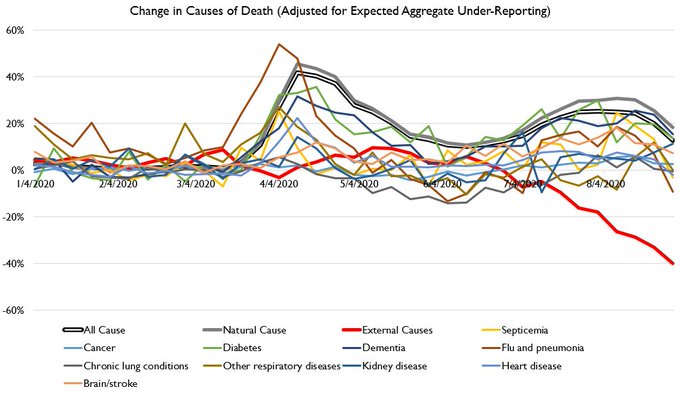 Some of the excess deaths are likely attributable to care for other conditions that was not given, either because the medical providers discouraged it or the patient thought they should not go in. Yet again, these graph lines track Covid deaths, not the shutdowns that would have created the other conditions. Many areas changed their rules for hospital and clinic admissions long before they have very many cases.  I don’t see that in those colored lines above. If there were a lot of that, it would show at least a little. Similarly with the next graph: 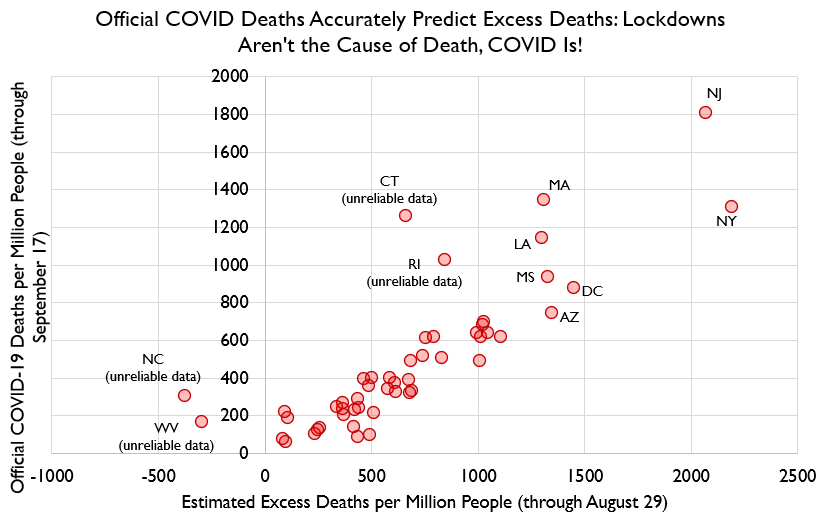 I have read a fair bit of speculation why the coronavirus numbers must be inflated, that hospitals get more money for that, that they are under political pressure to make C19 look bad, or that they are calling everyone with covid who dies a covid death, etc.  Except that all falls apart if the numbers aren’t actually inflated.  It is a bit of reasoning I learned from CS Lewis decades ago: there should be no speculating and explaining of why something happened until we have established that the think has actually happened. (I will note a parallel in the discussion of systemic racism.  First demonstrate that this occurs before engaging in lengthy speculation why it occurs and why people don’t want to hear it.)  As the old joke about the hasenpfeffer recipe goes, First, catch a rabbit.

For now, deaths from external causes are not up, they are down.  But deaths from everything else are up, with no ready explanation other than they are actually unrecorded coronavirus deaths.
If it’s any comfort it seems that other countries numbers are even less accurate than ours. How high?  If you follow Stone’s thread, it might be as much as double, though that is the high estimate.