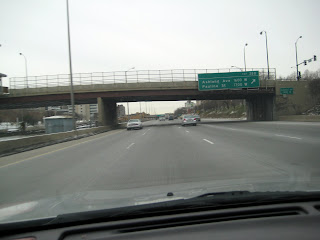 In past (work) lives I traveled across the USA and worked in many different cities. I think by the time I was done I had worked in 30+ states at one time or another. When I worked in Minneapolis, for instance, I was struck by the fact that when traffic was clear, most cars would travel near the speed limit, or maybe 5 or so mph faster. This pattern repeated itself in most other cities where I was forced to get a rental car and drive to the client on a regular basis.

In Chicago, on the other hand, on the few times when traffic is not congested, the average speed on an interstate highway like the Kennedy or Dan Ryan or Eisenhower is WAY up in the 80’s. Even in a construction zone (like today on I88), if you drive near the posted speed limit, you are like a rock in the stream.

One of the clearest ways to test this proposition is to leave the Chicago loop on one of the few times it is not congested (say, Sunday morning) and take I290 (Eisenhower) West, towards the suburbs. I290 “starts” from the loop so when you get on it is WIDE open… and then as the exits move on traffic gets worse until you reach gridlock (on most days, not on a Sunday).

This photo shows the wide open traffic from the view of my high powered almost a decade-old Nissan Altima. You can see that I am in the middle lane.

The EXPERIMENT would be – how f*cking fast would you have to go in order to stay in the left lane until it ends (at Austin, when I290 inexplicably loses a lane) and NOT get passed, assuming it was mostly wide open in front of you. On a typical day you’d have to go at least 100 miles / hour because people are absolutely FLYING down that road. It is even crazier on the Dan Ryan once you get south of the Loop.  I know that I am not crazy enough to do it.

I don’t know what it is about Chicago drivers but they seem possessed to drive as fast as they can in the brief moments that they can see daylight and clear pavement.

17 thoughts on “A Thought Experiment”