The British are famous for their love of dogs. Many prominent breeds came from London and of course the Queen has her retinue of Corgis. Recently I was in London and had the opportunity to view this all close-up. 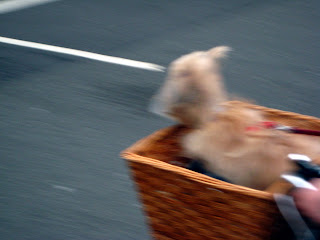 This picture is blurry but I had to put it in the post. We were walking through London and a guy had this little dog in the front basket of his bicycle while he rode through town and the wee dog had one of those “cones” on his head to stop him from licking his wounds (probably had recently been to the vet). 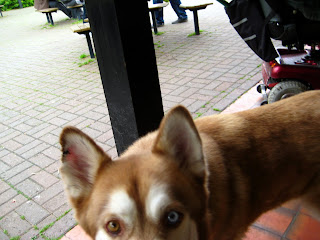 We were in Regent’s Park and a handicapped man had this dog called “Diesel” who was by his side and then kind of roamed around a bit looking at everyone. He was an Alaskan Malamute. He had one blue and one brown eye, as I captured in this photo while he looked at me. Someone was talking about feeding his dog and the owner shouted “NO NO DON’T WANT HIM TO BECOME A SCROUNGER” which I found to be apt and hilarious. 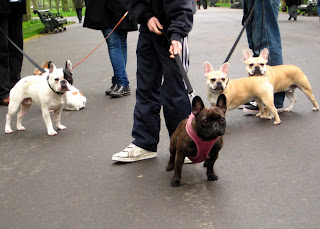 There was a meeting of the French Bulldogs near the “Honest Sausage” restaurant and I got down to eye level with the dogs to take a look. I like the little guy with the black coat in front giving me the stink eye… but you aren’t so tough with your pink outfit now, are you?

3 thoughts on “Dogs In London”