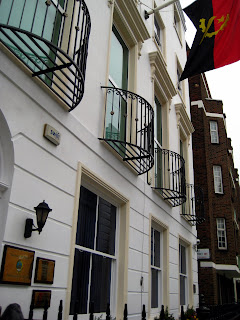 I was recently in London walking through the exclusive Marylebone neighborhood when I came upon this building with a vaguely socialistic (hammer & sickle) flag. I walked up to the front door and noted that in fact this was the Embassy of Angola. I am not a real estate expert but my guess based on a cursory knowledge of rents in the area (the land underneath is usually owned by the Portman Estate) but I would guess that the rent for this location is probably somewhere around $75,000 USD / month. To put it in perspective it is very near to the Swiss embassy, but that is a country that can afford the rent. 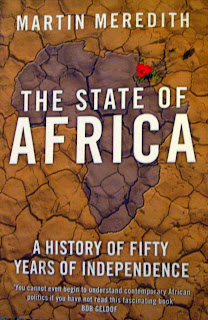 This embassy sighting probably prompted me to buy the book listed above for a flight back to the states by Martin Meredith titled “The State of Africa – A History of Fifty Years of Independence”. I was initially put off by the blurb in favor of the book by Bob Geldolf, but I flipped it over on the back cover and there were recommendations from more appropriate authorities, as well.

The book is an excellent read and it broadly covers the whole of Africa from the time of independence through the present day. At times it goes back further (such as the colonization of what is today the Democratic Republic of the Congo) but most of the focus is on the last 50 years, as it says in the title.

The overall thrust of the book is generally as follows:

– How the different colonial powers (Britain, France, Portugal, and Belgium) set up their regimes and generally how they handled the transition to local rule
– Some particular struggles (Algeria, South Africa, Rhodesia) are handled more in depth as they took longer and had more twists and turns
– The French colonies were more unique in that they voted (except for Ghana) to stay with France in more of a partnership (originally) – Ghana was cast out and everyone left at once
– The locally-run governments generally started in an era of euphoria and often were handed a reasonable level of infrastructure and a functioning economy (although not always, especially in the case where the entire European workforce left en masse)
– The local governments then began arbitrary political policies (like socialism, or industrialization) that did not leverage local strengths (like agriculture) and began the rule of the “Big Man”
– Where there were resources available (such as Angola, above), bitter and nearly insane struggles and civil wars erupted over control of these resources; almost invariably the riches of these resources were directed to a tiny political elite and not benefiting the entire country
– During the cold war the US and Soviet blocs favored different countries in proxy wars; France kept aiding their former colonies as a form of prestige
– The local governments contributed to famine through their uses of food as a weapon against rebel groups and through policies disruptive to the land (like forced collectivization in Ethiopia)
– Then AIDS came and struck across a wide range of their professional classes, leaving orphans and the elderly in countries already desperately in trouble
– There was sort of a “false spring” of new, less-corrupt regimes like Uganda under Museveni which then degenerated into a half-continent wide war over Rwanda and the Democratic Republic of the Congo, which was ably covered by Prunier in his book “Africa’s World War”

On Angola in particular, ruled for years by dos Santos, Martin Meredith sums up the situation pretty well:

Throughout the rollercoaster years of war and peace, dos Santos and his entourage prospered greatly… Elite families also benefited from state scholarships for their children to study abroad, in secondary schools as well as university level, and from state provision of foreign medical treatment. Between 1997 and 2001 overseas scholarships accounted on average for 18 percent of total government expenditure on education, more than was spent within the country on technical education and higher education combined. Foreign medical expenditure consumed 13 percent of total government spending on health, almost as much as was spent on primary health care.

An indication of how wealthy they had become was provided in the Economist Intelligence Unit in 2003. It reported that there were 39 individuals in Angola worth at least $50M and another 20 reportedly worth at least $100M. Six of the seven wealthiest people were longtime government officials, and the seventh was a recently retired official.

The stark contrast between the rich elite and the mass poverty of the rest of the population was nowhere more evident than in Luanda. Its streets were packed with the latest models of Mercedes-Benz and Land Cruisers… but half the city’s population of 4 million had no access to clean water… most Angolans subsisted on less than seventy cents a day.

Thus as you can see from the passage above, the Angolan embassy is perfectly placed to help the tiny circle of friends of the government to seek out the best possible schools and medical facilities, and is conveniently located near banks to enable them to invest their wealth offshore.

The book is generally apolitical. It doesn’t call for a mass increase in aid to Africa, and doesn’t even really blame colonialism for today’s troubles, although many of the colonial powers behaved abominably. From the final chapter:

But for the most part, Africa has suffered grievously at the hands of its Big Men and its ruling elites. Their preoccupation, above all, has been to hold power for the purpose of self-enrichment… Much of the wealth they have acquired has been squandered on luxury living or stashed away in foreign bank accounts and foreign investments. The World Bank has estimated that 40 percent of Africa’s private wealth is held offshore. The scramble for wealth has spawned a culture of corruption permeating every level of society.

Even when regimes have changed hands, new governments… have lost little time in adopting the habits of their predecessors… the British High Commissioner in Kenya said that the names of honest ministers and senior officials would fit on the back of a postage stamp.

After decades of mismanagement and corruption, most African states have become hollowed out. They are no longer instruments capable of serving the public good. Indeed, far from being able to provide aid and protection to their citizens, African governments and their vampire-like politicians who run them are regarded by the populations they rule as yet another burden they have to bear in the struggle for survival.

In my conclusion, I just felt sad that a continent with vast mineral and agricultural wealth is doing such a terrible job of serving its poorest citizens. The population of Africa is 880 million people, and hundreds of millions of innocent men, women and children are struggling to eke out the barest of lives among violence and rapacious governments. This isn’t about aid or post-war politics or colonialism, it is about an utter failure of government to be part of the solution, instead of the problem.

5 thoughts on ““The State of Africa” by Martin Meredith”