When I grew up I played a little bit of soccer. This was a long time ago and I was not particularly talented. Our team was better than most in the Chicago area because two German-born children of the coach of the long-defunct Chicago Sting also played alongside us and clearly led the team. I’m sure as actual German soccer players 30+ years ago they must have thought our soccer skills were absolutely pathetic, in contrast with European standards of the day.

There have long been debates on the (low) popularity of soccer in the United States, along with hand-wringing about the cause and various opinions on all sides. I haven’t paid too much attention to the debate but I was on vacation in Italy when the US team tied Italy in 2007 and I did feel good at the time (it was quite a shock to the locals, I’ll tell you).

Over the years soccer has grown as a youth sport and also as a competitive sport. The Chicago Fire soccer team actually is able to draw a decent crowd. In Chicago we have a vast foreign born population and whenever there is an important match on overseas our local bars pick up the games on satellite and are packed full of hard drinkers in bar wear for their favorite team.

The US beat Spain recently in a huge upset that did get some press. To say the team from Spain was favored is to vastly understate the scale of the upset; some compared it to the US defeat of the USSR in 1980 in ice hockey.

Today the US team took a 2-0 lead on another hugely favored team, the Brazilians, and I was outdoors having lunch watching the game out of the corner of my eye in a new bar / restaurant (called Brownstone, it was excellent) on the north side of Chicago. As the US team took a lead many passing pedestrians stopped to check the score and obviously noted what seemed to be another historic upset (at the time). There were local Brazilians in team colors, too, but also a large number of fans rooting for Team USA. Brazil was eventually able to catch up and won 3-2 which was a disappointment but the fans (including me) seemed to be electrified by the game and were shouting and paying close attention with every play. 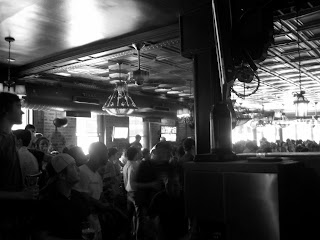 The interesting part of this is what was going on in that same bar at the exact same time – the inter-Chicago baseball rivalry between the Chicago Cubs and the Chicago White Sox. That 3 game series was tied 1-1 and the last 2 games had gone down to the wire, so there was a high expectation that this series deciding game would be a good one. It turned out not to be a close game, as the White Sox beat the Cubs 6-0, but I can tell you that the US vs. Brazil soccer game really held the crowd much better than the baseball game. While the photo isn’t that great, everyone in the foreground (and people outside) were watching the soccer game while the rest of the bar was watching the baseball game – and the sound was turned to the soccer game, to boot.

Maybe it isn’t soccer’s time yet in America, but it seems to be getting closer. And baseball better pick up its game…

15 thoughts on “Soccer vs. Baseball”