Three mini-reviews in this batch:

I picked up Thackeray’s “Vanity Fair” from the shelf where it had lain unread, lo these many years, and spent two weeks utterly immersed in the world of Becky Sharp and her friends associates victims. I’d never read the book before, but did see a made-for-tv movie based on it several years ago…IIRC, the movie was far more centered around Becky herself, whereas the book develops the other characters to a considerably greater degree.

Very funny (once you get used to the dense writing style) and utterly unsentimental: Thackeray called it “a novel without a hero.” Those looking for escapism by reading about the elegant lifestyles of the English upper classes should definitely look elsewhere: for all others, this book is highly recommended.
***
“The Promised Land,” by Mary Antin, is the story of the author’s journey from Polotzk, Russia (a town which was part of the Jewish Pale of Settlement) to Boston, Massachussetts, with her family, in the late 1800s. Antin was a keen observer and a vivid writer–particularly impressive given that she had no exposure to English until she was 13. “The Promised Land” was published in 1912, having been first serialized in the Atlantic Monthly.

Here’s a description of tenement life:

It must not be supposed that I enjoyed any degree of privacy, because I had half a room to myself. We were six in the five rooms; we were bound to be always in each other’s way…I could stand at any time in the unswept entrance hall and tell, from an analysis of the medley of sounds and smells that issued from doors ajar, what was going on in the several flats from below up. That guttural, scolding voice, unremittent as the hissing of a steam pipe, is Mrs. Rasnosky. I make a guess that she is chastising the infant Isaac for taking a second lump of sugar in his tea. Spam! Bam! Yes, and she is rubbing in her objections with the flat of her hand. That blubbering and moaning, accompanying an elephantine tread, is fat Mrs. Casey, second floor, home drunk from an afternoon out, in fear of the vengeance of Mr. Casey; to propitiate whom she is burning a pan of bacon, as the choking fumes and outrageous sizzling testify. I hear a feeble whining, interrupted by long silences. It is that scabby baby on the third floor, fallen out of bed again, with nobody home to pick him up.

To escape from these various horrors I ascend to the roof, where bacon and babies and child-beating are not. But there I find two figures in calico wrappers, with bare red arms akimbo, a basket of wet clothes in front of each, and only one empty clothes-line between them.

…and of her feeling of freedom and opportunity and the wonders of the public library:

Dover Street was never really my residence—at least, not the whole of it. It happened to be the nook where my bed was made, but I inhabited the City of Boston. In the pearl-misty morning, in the ruby-red evening, I was empress of all I surveyed from the roof of the tenement house. I could point in any direction and name a friend who would welcome me there. Off towards the northwest, in the direction of Harvard Bridge, which some day I should cross on my way to Radcliffe College, was one of my favorite palaces, whither I resorted every day after school.

A low, wide-spreading building with a dignified granite front it was, flanked on all sides by noble old churches, museums, and school-houses, harmoniously disposed around a spacious triangle, called Copley Square. Two thoroughfares that came straight from the green suburbs swept by my palace, one on either side, converged at the apex of the triangle, and pointed off, past the Public Garden, across the historic Common, to the domed State House sitting on a height.

It was my habit to go very slowly up the low, broad steps to the palace entrance, pleasing my eyes with the majestic lines of the building, and lingering to read again the carved inscriptions: Public Library—Built by the People—Free to All.

A very interesting book, recommended for all. (The full text is online at the Gutenberg Project–includes a number of pictures which weren’t included in my hard-copy edition of the book.)
***
I discovered Mary Antin via a brief mention in John Stilgoe’s “Metropolitan Corridor.” This is a brilliant but hard-to-describe book. The author, a professor of landscape architecture at Harvard, defines the Metropolitan Corridor as “the portion of the American built environment that evolved along railroad rights-of-way in the years between 1880 and 1935.”

No traditional spatial term, not urban, suburban, or rural, not cityscape or landscape, adequately identifies the space that perplexed so many turn-of-the-century observers. Reaching from the very hearts of great cities across industrial zones, suburbs, small towns, and into mountain wildernesses, the metropolitan corridor objectified in its unprecedented arrangement of space and structure a wholly new lifestyle. Along it flowed the forces of modernization, announcing the character of the twentieth century, and abutting it sprouted new clusters of buildings. Its particular juxtaposition of elements attracted the scrutiny of photographers and advertising illustrators; its romance inveigled poets and novelists; its energy challenged architecs, landscape architects, and urban designers. Always it resisted definition in traditional terminology.

To many rural Americans, the Corridor was the connection to a more exciting and glamorous kind of life:

So magnificent was the Illinois Central crack express–The Panama Limited–that every day for twelve years the Sixth Mississippi District Court at Vaiden recessed so that everyone could watch it come through the station..Until the 1920s, such trains represented prosperity and the promise of greater prosperity, luxury, futuristic design, and urbanity. To some Depression-era watchers, the expresses announced good times returning; to others, they advertised an unequal distribution of wealth. Long before and well into the Depression, however, the fast trains bespoke a peculiarly American strassenromantik, one centered on cities flashing across farms and forests, attracting the wondering admiration of children and adults…Every railroad right-of-way shared in the glamor that lingered like a whiff of coal smoke left after the all-Pullman express had passed. In the remotest corners of rural American, in suburbs of broad lawns, in small towns, the luxury express advertised the crackling energy of urban industrial zones.

In its scope and successful ambitiousness–though not, of course, in subject matter, Stillgoe’s book reminds me of Paul Fussell’s “The Great War and Modern Memory,” which analyzes the impact of World War I on literature and culture. (Unlike the Fussell book, you can read “Metropolitan Corridor” without danger of nightmares.)

Here’s the Mary Antin passage quoted in “Corridor,” in which she describes her frequent visits to the bridge overlooking the South Station yards and approaches:

I liked to stand leaning on the bridge railing, and look down on the dim tangle of railroad tracks below. I could barely see them branching out, elbowing, winding, and sliding out into the night in pairs. I was fascinated by the dotted lights, the significant red and green of signal lamps. These simple things stood for a complexity that it made me dizzy to think of. Then the blackness below me was split by the fiery eye of a monster engine, his breath enveloped me in blinding clouds, his long body shot by, rattling a hundred claws of steel; and he was gone, with an imperative shriek that shook me where I stood.

So would I be, swift on my rightful business, picking out my proper track from the million that cross it, pausing for no obstacles, sure of my goal.

“Metropolitan Corridor” is strongly recommended for those interested in American social and literary history.

Image below is Mary Antin’s railyard 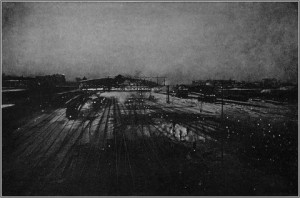