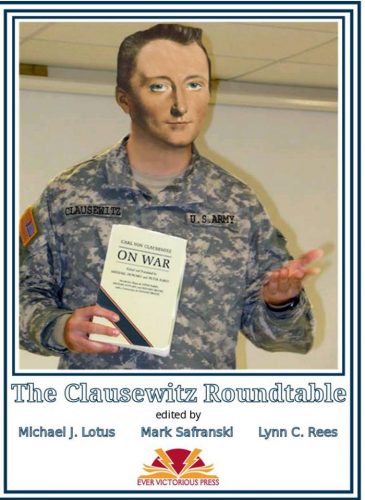 We are proud to announce the publication of the Clausewitz Roundtable in book form. This book is an edited version of an online discussion on the Chicago Boyz blog in the Fall of 2009.

It is said that everyone quotes Clausewitz, but no one reads him. The participants in this Roundtable refuted that assertion. We read On War, all of it, and commented on each chapter of the book.

Reading On War with a like-minded group, committed to taking Clausewitz seriously, in his own words, without relying on secondary sources, was an intellectual adventure. The discussion was lively, thoughtful and insightful.

If you are interested in Clausewitz, and the ongoing value of Clausewitz’s classic book, the Clausewitz Roundtable will be of interest to you. It is now published in electronic format, and is modestly priced at $2.99.

If you buy the book and like it, please leave a positive review on the Amazon page.

If you read and liked the original Clausewitz Roundtable, you could in all fairness leave a review on the Amazon page based on that as well.

We have an important issue we need to discuss with Mr. Hodge.

If anyone is in touch with him, please ask him to contact me via this blog. 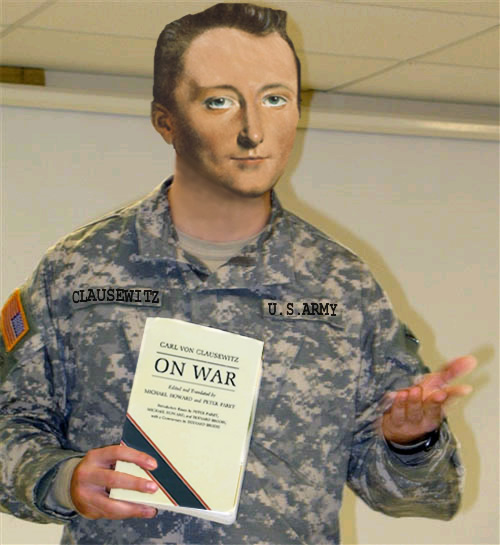 “…we say that there is only one result that counts: final victory“.
– Carl von Clausewitz

On War is a classic of military strategy and perhaps the greatest work ever produced on the nature of war. Clausewitz’s genuine rivals are very few – Sun Tzu and Thucydides come to mind but these comparisons, though equally great in stature, are also at best inexact. How important is Carl von Clausewitz? In the words of the arch-Clausewitzian Professor Chris Bassford:

Clausewitz is the theoretical cornerstone of all the US military’s mid- and senior level PME (Professional Military Education) schools and all US military doctrine. I can say that fairly authoritatively, since I teach at the National War College and have tought at the USMC Command & Staff College and the Army War College, and have also been a US Army soldier (field artillery) and a USMC and Joint Staff doctrine writer

Yet at the same time, Clausewitz is often forgotten, as by the Kaiser’s Grossgeneralstab on the eve of the Great War or by America’s four star grandees at MACV when JFK believed in “flexible response” and LBJ in “escalation”. Then, painfully, after national hubris or martial incompetence brings some great historical debacle, Clausewitz is remembered again, sometimes to be blamed or to be offered up as a savior and the dog-eared copies of On War are taken from the shelf and dusted off.

I think we are living in such a time.

This roundtable has been a delight. Not only did it force me, someone who was not particularly in tune with Clausewitz to give On War a second and more serious reading but the other participants who have posted here or discussed CvC further via email have been enlightening and in some cases, caused me to reconsider prior opinions. For that I thank all of you.

America needs more military strategists and more statesmen who understand how to think strategically. It is a shame that On War and other classics are not required reading in the universities that produce the American elite and it is daunting to consider that we regularly elect politicians to posts of high responsibility who never managed to get through key texts like The Republic or On War. If you couldn’t stare down the ghosts of Plato or Clausewitz from the comfort of your dorm room how will you look a Putin or Ahmadinejad in the eye? How can you steer the ship of state when you do not know the fundamentals of navigation?

Therefore, despite my partiality for Sun Tzu and my unapologetic admiration for John Boyd, I hope more people elect to pick up On War and wrestle with the author until they understand his unsparing but subtle philosophy of war. America can only benefit from a Clausewitzian revival.

Book VI of On War is about von Clausewitz’s assertion of the pivotal role of defense in war. And so it is. To me however, the passages were echoes of Napoleon’s folly of invading Russia, vast and terrible, and the enduring lessons that von Clausewitz managed to distill from the frozen wasteland of the endless steppe. “The People’s War” rose in Spain against King Joseph Bonaparte and French occupation; led by juntas, the campesinos fought French soldiers with merciless savagery but it was waging war in Russia that had reduced Napoleon Bonaparte from a European Emperor, down again to a mere upstart Corsican general. A parvenu brigand on a continental scale.

No wonder Carl von Clausewitz was in awe of defense.

“If defense is the stronger form of war, yet has a negative object, it follows that it should be used only so long as weakness compels, and be abandoned as soon as we are strong enough to to pursue a positive object. When one has used defensive measures successfully, a more favorable balance of strength is usually created; thus the natural course in war is to begin defensively and end in attacking”

Of what worth is the unfinished scribblings of an out of favor subject of the feeblest autocracy in the whole Concert of Europe, a middling officer who was lightly regarded in his own time and lightly regarded by most of his immediate successors?

Clausewitz stands alone, the only epochal thinker on war. He is the Newton and Darwin of war, all in one, but he lacks successors. Where he went, no one has followed or passed him by. He said let their be light and there was light, but of a peculiarly refracted sort. Even the most incisive of Clausewitz’s Prussian students, the elder Moltke, missed the whole war is the continuation of political intercourse by other means thing and insisted upon political outcomes that derived from purely military considerations. When war broke out, the politicians should take some time off and let the soldiers run things. Once they have achieved victory, then the politicians can take the hand off and run with the ball. Moltke, tired of Bismarck’s interference in what he saw as his domain, insisted on Alsace-Lorraine as a military buffer against the Third Republic and ended up waving a permanent red flag in front of the Gallic bull.

Clausewitz is also a parochial figure of his own time, with his own country to defend, his own axe to grind, his own issues, and his own petty grievances. Two stars shine in his firmament: Frederick II and Buonaparte. While Clausewitz often strikes observers as a worshipper of Buonaparte, to whom Clausewitz refers as the “God of War”, I would peg him as a devotee of the Frederican cult. Given Clausewitz’s strong bias towards defense (compare Books VI and VII), his numerous references to Frederick’s exploits during the War of the Austrian Succession and the Seven Years’ War, and his belief that war was the continuation of political intercourse with the addition of other means, his large though not uncritical admiration for Old Fritz becomes clear. Frederick represented the ultimate subordination of war to the political: Frederick’s mind put his political interests ahead of his military pursuits. Policy and strategy, since one thought followed another, were in perfect agreement. Frederick was the ultimate practitioner of the strategic defensive: he knew his limits and adhered to them with an iron will. Clausewitz, like many contemporary Prussians, was looking for a system that would produce a Frederick when it could only produce a succession of second-class Frederick Williams. His commander-in-chief participating in cabinet meetings was the best analogue he could find to the absence.