I recently traded in my old Acura MDX for a new one. What a long, long way we have come in the 7 years since I purchased a new vehicle. I now have an air conditioned seat, something I am looking forward to using this Spring and Summer. I also have a heated steering wheel now, which is great during Winter. Quite the creature comfort.

It also has a feature called Auto-Idle Stop that you can enable and disable that shuts the car off at a stop to save gas. The Acura dealer says that is will save a mile a gallon. At first I didn’t like it, but now I am used to it. I remembered it from when I was in a Prius cab once. When you take your foot off the brake, the car fires up and off you go. While you are stopped, all of the climate control and audio/whatever else you have on is still functional. It automatically turns back on after around a minute sitting there if you haven’t moved. I have no clue how this actually saves you gas but if they say it does, I guess they can’t really lie about it.

Outside of all of the comfort things, the new vehicle is a technological powerhouse. I have had it for almost a month now and am still figuring out all of the features and tech stuff. It has 16 gig of memory to store music onboard. I don’t use that much since I love my XM, but there it is if you want it.

Of the greatest interest to me are the next steps auto manufacturers have made to get everyone used to the idea of the inevitable autonomous vehicle. Three things work in concert on my vehicle. They are Adaptive Cruise Control (ACC), Lane Keeping Assist System (LKAS) and Lane Departure Warning (LDW). At first I turned all of this stuff off, but decided to one day read the manual (I know) to understand how it all works. It is interesting to say the least.

ACC is basically “smart” cruise control. You set your cruise and it will keep the speed, but will also compensate for cars in front of you. You can set the distance that you prefer between your car and the car in front of you (there are four distances to choose from). In the city, I choose the closest distance so as not to clog traffic. The car will actually go all the way down to zero, braking at a light, and will start moving again when the car in front moves forward. There is a bit of a delay when you re-start, so you may look like you have no idea what you are doing, but to heck with everyone else, you don’t have to accelerate or brake and they do. Oh yes, the Auto-Idle Stop feature works with this as well, but you have to hit the accelerator to resume again if you are Auto-Idle Stopped with the ACC in charge.

LDW is, from what I have figured out, just a warning system. It wiggles the steering wheel and shows a display when it feels you are out of the lane.

LKAS is where the rubber really hits the road. When you enable this along with the ACC, the car literally drives itself. LKAS keeps you centered in the lane at whatever speed you are going. I have taken my hands off the wheel, but there are apparently sensors in the wheel because after a few seconds, the car says “you have to drive” and shuts down the auto systems. So just a light pressure on the wheel is all you need and you can let the car do the work. Sometimes the delay takes a bit and it would seem to the car behind you that you are drunk driving since you are weaving back and forth a bit in the lane. This typically happens when you are on a curved road. It isn’t perfect, but when the road is straight, it works very well.

The cameras for all of this are only as good as the ROAD MARKINGS. We had a snow storm recently and my car was caked with snow and ice and the car just said on the display “cameras blocked” and you are on your own. In addition, I live in rural Wisconsin, just outside of Madison. In the city, there are much better lane markings. In the country, the roads have NONE. No smart driving for you in the country, although the ACC always works wherever you are as long as the camera isn’t blocked by snow. Even in the city, the lane markings deviate and/or are in bad shape in areas, and the car will beep and tell you that “tough stuff, you have to drive”, we can’t see the lane. This means that you have to pay attention because at times, you can see the lane markings, but the cameras can’t. There is a part of the display that lets you know if the camera can see the lane markings. I haven’t been on the interstate with it yet, but will soon and look forward to seeing what the car can do in that venue. I assume it will work great.

All in all, when I figure out everything, this new vehicle will make my hour plus a day in the car a much more pleasant experience. Without proper lane markings, however, or unless and until we have lightning speeds with GPS, I don’t see fully autonomous vehicles coming for a bit. Which gets me to thinking I should probably look into investing in companies that manufacture lane marking equipment and paint, but that is certainly grist for another post. 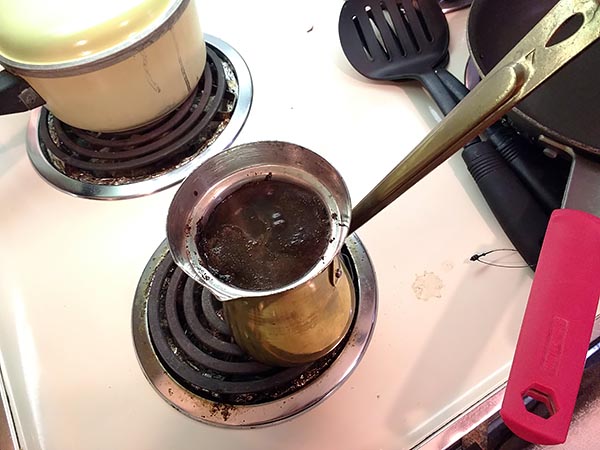 Cafe Najjar is the official Arab/Turkish coffee of the Chicago Boyz blog.

Chicagoboyz is making millions in Amazon referral fees, at least as measured in Venezuelan currency. However, in the interest of honesty we must acknowledge that our recommended cheap espresso machine has bought the farm for the second time in its warranty period. Third time may be the charm but we suggest looking at alternatives. Chicagoboyz reader PenGun mentioned his good experience with this Breville model and indeed the Breville line has a good rep. I myself just ordered a Nespresso combo as a gift, based on its generally good reviews. Nespresso may be a good option if you prefer the convenience and consistency of packaged coffee cartridges.

It’s a jungle out there, YMMV, choose wisely, and whichever machine you buy make sure to give it a good workout during the seller’s return period. I can vouch for DeLonghi’s warranty, so my original recommendation is still a good bet if you’re willing to roll the quality-control dice. Happy caffeinated holidays and feel free to leave your own suggestions in the comments.

I’ve updated my review of the DeLonghi EC155 espresso maker. I still like the machine because it makes great coffee and there’s nothing comparable for the price, but mine just conked out after five months (DeLonghi will replace it under warranty).

The DeLonghi EC155 15 BAR Pump Espresso and Cappuccino Maker is the official espresso maker of the Chicago Boyz Blog.

I started drinking coffee heavily, for my health. The occasional espresso shot from local coffee shops was no longer enough. Could I make my own? Experiments with a borrowed steam-powered espresso maker yielded mediocre results, nothing like coffee-shop quality. However, most of the better machines available on Amazon seem to have mixed reviews, with buyers complaining about all kinds of problems. Perhaps, as with many types of complex equipment, user error is an issue. I decided to test the rich coffee-colored waters for myself by buying the least expensive machine with decent reviews that I could find, the DeLonghi EC 155. It turned out to be much better than I expected, with a few caveats: