Artificial Intelligence and the limits of language.  Is it possible to truly understand statements represented in language without knowing something about the world outside of language?

The abolition of school discipline…basically, the public school equivalent of shutting down police departments.  The article at the link discusses the consequences.

How did Amazon Web Services become so successful?  The track record of companies that developed information technology for their own use and then decided to market it to other users has not been very good:  AWS is a major exception.

Can capitalism save Hollywood?

The nature of America’s university administrators, as observed by Stephen Hsu.  More here.

The mother of Dietrich Bonhoeffer, a major figure in the German anti-Nazi resistance, refused to send her children to public schools:

She was openly distrustful of the German public schools and their Prussian educational methods. She subscribed to the maxim that Germans had their backs broken twice, once at school and once in the military, she wasn’t about to entrust her children to the care of others less sensitive than she during their earliest years.

Analysis of trends in scientific publications suggests that truly disruptive research is becoming less common.  The article at the link argues that ideological capture of institutions has been a major cause of reduced innovation.  See also this related article.

Joseph Flaherty reacts to a small carving of a water bird, created 33000 years ago:  “Imagine your greatest of grandparents, pursued by frost and ravenous megafauna through an endless German winter, huddled in a lean-to lit and warmed by an open fire, deciding to carve this bird to make their child smile, to impress their mate, or simply for the joy of creation.” 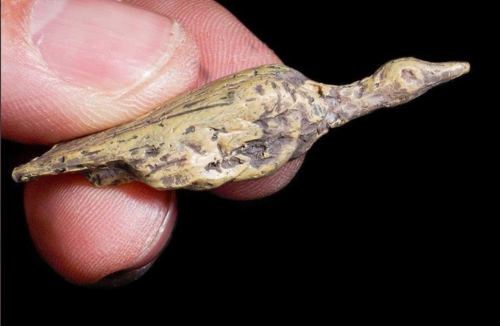