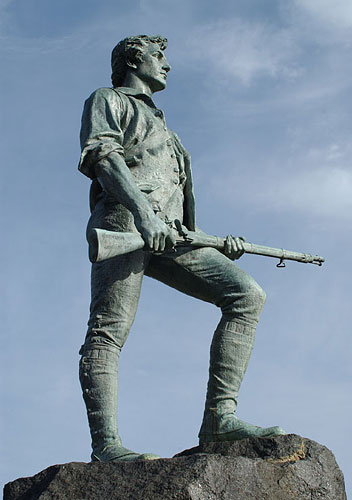 The town of Lexington lay right along the road to Concord, and the Lexington militia had already assembled on the town green while it was still dark. There was confusion about what exactly was happening, and it wasn’t certain how far away the British troops were, or whether in fact the whole thing might have been a false alarm. But it was no false alarm, and just as the sun was rising, about five in the morning, they saw the long British column coming up the road toward them.

The British vanguard formed up in a battle line on Lexington green facing the militia, who numbered only thirty-eight. A British officer ordered the militia to drop their weapons and disperse. They did begin to disperse, but they didn’t drop their weapons, and then from somewhere a shot was fired. To this day, no one is certain where the shot came from. It may have been from the British lines; it almost certainly wasn’t from the Lexington militia. It may have been from a bystander, or it may have been an accidental misfire. Whatever its origin, that first shot started the British soldiers firing, without orders, into the dispersing militia. When the smoke cleared from those very few minutes of confusion, eight Lexington militiamen had been killed and nine wounded. Some bled to death on the front steps of their houses around the edge of the green. …

When the British column arrived at Concord they had very little success with their principal mission. Nearly all the arms had been hidden away and many of the cannon had been buried in the freshly-plowed fields. … The small detachment at the North Bridge watched as hundreds of militia began to assemble on a nearby hill. …

…soon the entire British force began to march back the way it had come, down the long road to Boston. By the hour, more and more militia and minuteman companies were arriving from the surrounding countryside, and the British retreat turned into a brutal rout, a battle three hundred yards wide and eighteen miles long. At every turn of the road a militia company was waiting and fired into the British ranks. The British were fired upon from many houses along the road, and in response their advance parties began burning nearly every building they came to. …

The above passages come from this excellent modern account of the events of April 19, 1775.

An open letter from the Massachusetts provincial congress to the inhabitants of Great Britain, regarding the events of April 19, 1775. (“…the regular troops on their way to Concord marched into the said town of Lexington and the said company, on their approach, began to disperse that notwithstanding this, the regulars rushed on with great violence and first began hostilities by firing on said Lexington Company, whereby they killed eight and wounded several others …”)

A letter from Ann Hulton, Massachusetts resident, wife of a customs commissioner, sympathetic to the British side. (“…a prodigious number of people now occupying the hills, woods, and stone walls along the road. The light troops drove some parties from the hills but all the road being enclosed with stone walls served as a cover to the rebels, from whence they fired on the troops still running off whenever they had fired, but still supplied by fresh numbers who came from many parts of the country. In this manner were the troops harassed in their return for seven [or] eight miles. …”)

General Gage’s report of the events. (“…It appears from the firing of alarm guns and ringing of bells that the march of Lieutenant-Colonel Smith was discovered, and he was opposed by a body of men within six miles of Concord, some few of whom first began to fire upon his advanced companies which brought on a fire from the troops that dispersed the body opposed to them; and they proceeded to Concord, where they destroyed all the military stores they could find. …”)

Major Pitcairn’s report of the day’s events. (“…when I arrived at the end of the Village, I observed drawn up upon a Green near 200 rebels; when I came within about 100 yards of them … I instantly called to the soldiers not to fire, but surround and disarm them … some of the rebels who had jumped over the wall fired four or five shots at the soldiers … Upon this, without any order or regularity, the Light Infantry began a scattered fire …”)

Video of reenactment on Lexington Green.
Minute Man National Historical Park.
There are many good links at American Revolution.org.

UPDATE: Note the way the statue of Captain John Parker, above, is echoed in the recently unveiled statue of Rick Rescorla, hero of the Ia Drang battle, and hero of 9/11.