I used to audit a community college. Some of the students on work study used to assist me with financial tasks and they were fun to work with. One day a girl seemed downcast and I asked her why. She said that she had a geography quiz and didn’t feel that she performed well. I asked her which questions she had difficulty with and one of them was “Which continent is Brazil located in?” I pulled out a piece of paper and drew a crude map of South America with Brazil along the coast and gave it to her.

Later she came back with an atlas and exclaimed “You were right!” The most interesting part of the story to me is that, in her mind, a lay-person like me (not a teacher) knowing which continent Brazil was in seemed like such odd and obscure knowledge that she assumed I was “guessing”. 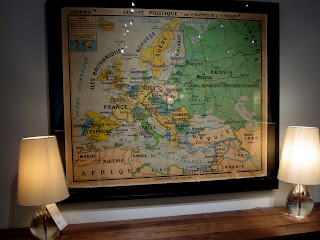 I was recently in Room and Board, an excellent store, when I saw this interesting French map on the wall. What caught my eye was a small tag in the corner of the frame that said “c 1900” meaning “circa 1900”.

I knew instantly that this wasn’t true, since you can see from the map that the Austro-Hungarian empire had been split into its constituent parts and the post-WW1 land re-divisions had already occurred, such as the expansion of Italy. This is obviously a map dated post-1918 and pre-1945; this I could tell from the second I looked at it.

But the real issue is that this sort of knowledge of history applied to the lands of Europe is probably viewed as an obscurity by most people, including the hundreds or thousands of people that pass by this map every day at the store and look at it as an “art object” (it is a quite beautiful map, and if I had a place to display it and the price was right and I could yank off the “c 1900” tag I might think about buying it). I did not inquire but I am sure that if I asked the manager about this tag he would look at me like a crank and I can guarantee that my shopping partner would not have appreciated the likely subsequent argument.

The other part that is interesting to me is that many of the employees of Room and Board are highly educated and literate people, at least in my interactions with them. I am certain that many of them have liberal arts and design backgrounds. But this sort of arcane knowledge, the impact of military and political affairs on the boundaries of European states from 1900 – 1945 (and now into the 1990’s with the fall of the Soviet Union) would not be the type of work that would fit into their curriculum anyways. You could take an elective on virtually any historical topic to fulfill your meager requirement for history (if you had one at all) and I’d bet my last dollar that this sort of military / political history would be far less popular than myriad other potential classes.

39 thoughts on “Maps and History”