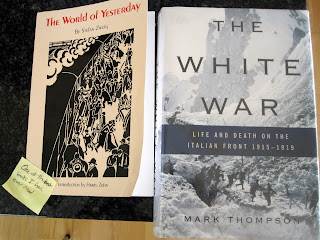 . This book is the author’s auto-biography that he wrote from Brazil in the early 1940s when Hitler was at the apex of his power and had overrun France and his beloved Paris and basically destroyed the Jewish intellectual culture in the region; after sending it to his biographer the author killed himself. You can see the post-it note that Dan put on the book – “one of the best books I have ever read”.

Stefan describes Austria under the regime of the Austro-Hungarian empire, when Vienna was the cultural center. The portrait is of an intellectually enlightened culture where music and the arts are held in high esteem; part of this is due to the fact that the author’s family owned a successful business and they also resided in what was presumably the wealthiest part of the empire.

It is my own ignorance but I generally lumped the Germans and the Austrians into one ethnicity in my mind and this book calls out the differences. The Germans are seen as the efficiency-expert types and the Austrians are by comparison tolerant and focused on the arts. As the climate against the Jews turns from bad to worse it is the Germans (whether in Germany or the ethic Germans in the borders of the empire) that lead this effort.

All in all a great book about an intellectual leader who was part of a proud and ambitious art culture but watched it all laid waste under the rise of the Nazis. In the end his entire world was effectively destroyed, as the Austro-Hungarian empire fell (replaced with deprivation for the surviving states) and then finally almost all of continental Europe fell under the boot of fascism.

In parallel I purchased an award-winning book about a WW1 front of which I knew very little, the war between Italy and Austro-Hungary on the Italian border called The White War

by Thompson. This book describes the futile Italian offensives as the multi-ethnic Austro-Hungarian army attempts to hold them off against the provinces of its empire.

My knowledge of the Italian front was limited and incomplete; the combined offensive with the Germans at Caporetto in 1917 was well known not only because Rommel won his Pour Le Merit (highest military honor) at this engagement but that Hemingway documented it in fiction through “A Farewell to Arms” as the Italians collapsed. The time of 1915-1917 and repeated battles in the mountainous region consumed armies on both sides in difficult mountainous conditions and in harsh winter weather. In fact Caporetto is also known as Twelfth Battle of the Isonzo, to put the series of attrition-like engagements in context.

One item that stood out to me throughout the book was how they would identify the Austro-Hungarian troops based upon the regions from which their units were raised; whether they were Czech riflemen or Bosnian soldiers. And although the armies faced terrible hardships, in general these troops from differing nationalities fought for their empire right up to the end.

Despite blizzards of propaganda by Czech, Yugoslav, Polish and other separatist groups; half a million POW s returning from Russia, many of them newly politicized and loudly critical; extremely degrading conditions at the front, and the disappearance of any hope of victory – despite all this, the Hapsburg army remained loyal. There were no mutinies on the Italian front until late October, just before the last battle; even these were limited to a few units.

In today’s world there is a view among intellectuals that differences among groups are receding and that entities like the European Union or the UN can bring them together for coherent and common purposes. On the other hand, there is the reality “on the ground”, as nations split into smaller and smaller pieces, such as the Yugoslavian split, the Czech / Slovak split, and the likely impending Belgium split.

In the twenty first century the world is continuing a tradition of splintering nations into tinier entities, along ethnic lines, and with resources or major cities being the main prizes that are fought over. While this occurs there is a “gloss” of cooperation and collaboration that is more theater and for show.

It is interesting how this “false” world of collaboration (where it is in everyone’s best interests) contrasts with the much more public and up-front efforts of running an empire like Austro-Hungary. In fact the monarchs were aware of public opinion and for its day attempted to preserve customs and religions of the areas under its control, and to leverage the resources and skills of its far-flung citizens. While the downsides of the empire are well known (lack of self determination for every nationality), the empire as a whole had rapid economic growth, a consolidated foreign policy, and investment in areas such as transportation (rail) and post systems that benefited everyone.

The Austro-Hungarian empire also provided the Jewish culture in Vienna and elsewhere with relative protection compared to what they faced elsewhere (Russia) and later (with the rise of Hitler and the ultimate annexation of Austria). It is this world that dissolved and was utterly destroyed in the Zweig book, leading to his eventual suicide at the time of Paris’s occupation by the Germans in the early 1940s.

While you’d be seen as “insane” to advocate anything similar to the Austro-Hungarian empire in today’s world of hyper-local countries with a pan-gloss of cooperation, it would be an interesting thought experiment to see if nationalities could work together for a common good, even including military efforts. Today’s EU has a poor standing military; it is the member states that provide specific firepower. In 1914-8 the Austro-Hungarian empire brought soldiers together willing to die for their common goals, and in the context of that era (not by today’s context) they were relatively successful, until toppled by the two “isms” of nationalism and the incipient communism / fascism that was to plague the thirties and forties.

15 thoughts on “The Austro-Hungarian Empire Revisited”