” by Matthew White with the sub-title “The definitive chronicle of history’s 100 worst atrocities”. Since it is the holiday season, not being involved in one of these events is definitely something to be thankful for… 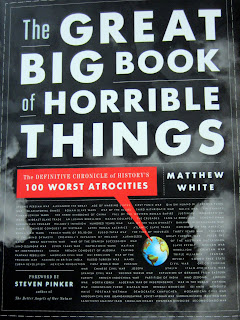 As someone who has spent their entire life reading books about history and military history in particular, this “organization” of cataclysmic events is very interesting. The author has different types of events, such as major dictators, not just wars, as he attempts to “rank” and chronicle each occurrence. Here are the top ten items per the author:

The first thing that came to my mind is that I didn’t even know what some of these items were; I know relatively little about ancient Chinese regimes and I had never even heard of the Taiping Rebellion which occurred from 1850-64 and per this book at least killed more than World War I (of which I know a great deal). Here is a wikipedia article on the Taiping Rebellion which also quotes the 20 million figure (for what it is worth).

I also find interesting the separation of individual dictators from the military conflicts that they led or sponsored. He did not break out Hitler from WW2 since Hitler’s atrocities were mostly contained within that time span. However, Stalin’s atrocities occurred pretty much from the moment he took power until the day he died so he received a separate section dedicated to his crimes. The author also makes a special section on the communist crimes where he aggregates the various tyrants and crimes in one spot for sad if easy reading.

In order to “make the list” you needed to reach over 300,000 killed. At the back of the book the author lists some atrocities that failed to “make the cut” in case an atrocity had a particular cheering section. I didn’t see the Sri Lanka civil war listed but a look at wikipedia put the death toll at 80-100k or so which means they weren’t even close to the cut off point. 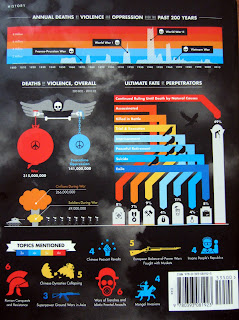 The author also attempts to attract readers with an interesting use of graphics. This is from the back cover and I found it to be very engaging.

All in all the book is excellent not because it necessarily shows anything new but that it attempts to look at disastrous events in this new “ratings” analysis. Many of the death totals are nothing more than guesses especially the ones in ancient times (and civilian deaths tied to even recent wars also range wildly, such as on the Second Congo War), but the orders of magnitude are good fodder for discussion, at least.