My clan spent the weekend in Chicago. We had a fabulous time and really packed in a lot of activity into 48 hours or so.

Our first stop was the observation center of Sears Tower. Yes, I understand it is now the Willis tower, but I am old school that way and to me it will forever be the Sears. Sort of like some people still call the Aon Center “Big Stan”. The kids were blown away by the view up there and we had a nice day for it. The kids went out onto the “Ledge”. I was getting a bit of vertigo and couldn’t do it. 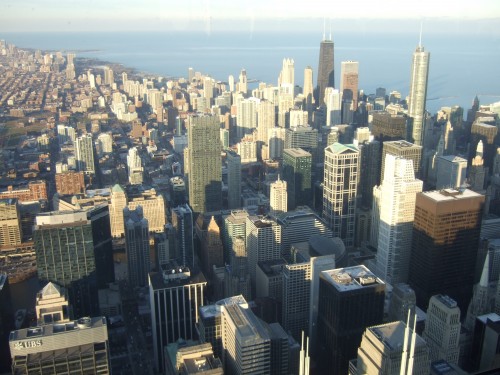 Next stop was Macy’s (yes, the old Marshall Fields) to see the windows. My wife used to come down here when she was a child with her grandparents. The windows were entertaining and there were also some street performers down there to try to suck some tourist money.

Inside, Macy’s was decked out wonderfully. They must have needed an army to get it all together. We signed up for dinner at the Walnut Room – one hour wait but the ambience was spectacular. Sorry I cut off the top of the tree here, but there was really no way to get it all in. 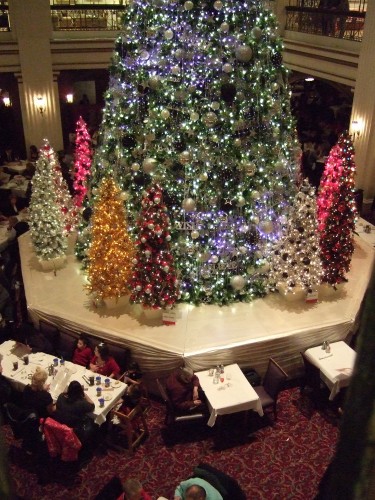 Dinner was surprisingly affordable, with most entrees between ten and twenty dollars. The menu was limited – I had the beef short ribs and they were delicious. I think they limited the menu due to the enormous crowds which was a smart move. They had fairies circling the crowd and granting wishes and spreading fairy dust around on the patrons which also added a nice touch.

We later went to the Auditorium Theater to see the Nutcracker. It was great as always and the Auditorium is a wonderful place to see a show. So beautiful.

On Saturday we woke up and hit the Field Museum. My kids have never been there (nor even to Chicago) and my wife and I hadn’t been there in a quarter century. There is literally no way you can get through this place in one day. After about five hours or so we were all on information overload and gave up.

Of special interest to us were the dinosaurs, minerals and wild animal exhibits. Disappointing to me was the fact that many of the cultural exhibits have succumbed to political correctness. I don’t really want to get into that part too much though as there is so much positive to learn at the Field, that I really encourage everyone to see it. The cost for my family of four was $90. This is the new scam they have – it is actually cheaper to purchase a family membership to the museum than to pay for four admissions if you include all of the special exhibits – right now they have whales and chocolate. The whale display is highly recommended – I really didn’t learn much from the chocolate exhibit, but I have read several books in the past about chocolate production so you may be interested in it.

Below is yours truly with the official dino of ChicagoBoyz, the Parasourolophus. 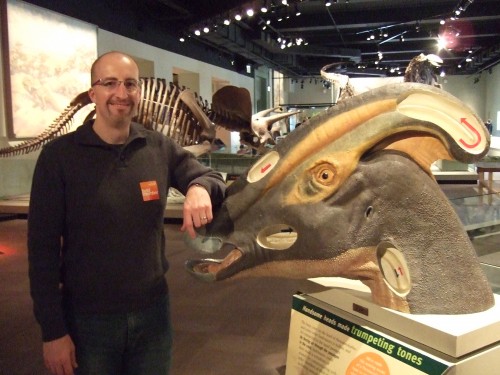 And I enjoyed the details of the building from an age long ago: 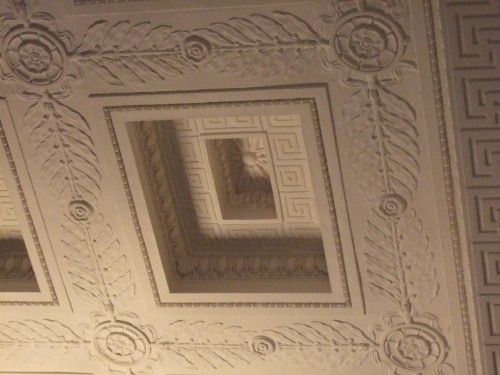 We then went to the Christkindlmarket on Daley Plaza. It was an absolute mob scene. We shuffled through one aisle of that and got out of there. You literally could not fit one more person in there.

For dinner this night we went to Emilio’s for tapas. It was fantastic. If you enjoy this type of food I highly recommend it.

On Sunday we went to Ed’s for breakfast. The tone there was not as caustic as for the typical lunch or dinner, but the wait staff still was disprespectful as always, referring to my children as “brats” and tossing straws on the table, etc. It was a great time. The food was quite delicious and reasonable.

On the way home we stopped at IKEA in Schaumburg as my wife wanted to get some ideas for the house we are building. This was a punishing two hours for me and the kids as this is like valhalla for a person like my wife. The kids liked looking at some of the things, but we were all completely drained after this and even my wife admitted that she had to call it a day. We left with about $40 worth of flotsam designed by Swedes, made in far eastern countries.

My kids were absolutely amazed at the El. My wife and I, having spent a lot of time here in the past sort of shoulder shrugged it, but whenever a train went over our heads (loudly) the kids just stopped and looked up in total amazement. I told the kids that this is the best transportation system the 1890’s has to offer. They didn’t get the joke, but when I told them how old it was they were once again blown away. They had never seen anything like it and couldn’t understand why the train was above us instead of on the ground. I will be getting my oldest a book on the subject for Christmas.

The kids were also amazed at the noise level of the city. People, trains, cars, trucks, ambulances, buses, bikes, etc. I also realized that the kids had never seen bums before and they wondered what was up with that. The kids also enjoyed the hustle and bustle of getting cabs and such. Eventually they wanted to hail them themselves which was fun.

We stayed at the Wyndham on North St. Clair Street. We got a nice rate for $139 a night, which netted out to around $220 a night after parking ($52 per night) and the outrageous taxes. I don’t recommend it because it is right by Northwestern Hospital and the wife and I were awakened several times a night from the ambulances wailing. Nice place though, if not a bit tired. We didn’t eat or drink there.

In general, Michican Avenue and all the sights looked fantastic. Chicago seems to be doing a booming tourist business, even in this tough economy. We had a lot of fun and I recommend if you can, to spend a night or two there this holiday season and do some stuff or if you already have plans, to do it next year.

The only thing I really regret was not being able to see the Lexington Green library. That is on the bucket list though.