Both our current administration and the New York Times appeared to have little or no understanding how the “real” economy worked or the impact of incentives on tax policy. In more recent years they grasped that changing tax policy can impact economic incentives, which in turn, can increase their chances of being re-elected.

Their first major foray was “cash for clunkers” which gave a tax deduction for turning in your old car for a new one. Like most one-time incentives, it accelerated purchases into the current period, giving a boost to auto manufacturers and car dealerships (and sticking the tax credit to the deficit). Lately the administration has gotten bolder, offering 100% deduction for capital purchases in the current year for tax purposes (which has the same effect as “cash for clunkers”, except on a wider scale as tax incentives for corporations and private companies), and then giving a 2% “payroll tax cut” which finally eliminates even the concept that social security is anything more than a “pay as you go” system and that there is nothing there waiting for you when you retire.

Examples abound of a failure of #1, including raising marginal taxes on the wealthy (they change their behavior or move to another jurisdiction) and the distortive effects of #2 are legendary, including over-investment in non-productive housing stock (due to the mortgage interest deduction) and the massive numbers of lawyers and accountants that make a living on the entrails of our bewildering and counter-productive tax system.

In recent years the NYT, as the sounding arm for the administration, has started to realize that the haphazard and counter-productive effects of our current tax system are legion, and that better core policies could improve revenues while minimizing negative behavior. This article called “A Better Tax System” (Instructions Included) laid our four principles that seem reasonable overall:

1) Broaden the base and lower rates
2) Tax consumption rather than income
3) Tax “bads” rather than “goods”
4) Keep it simple, stupid

I would say that their item 1 corresponds to my number 1, above, because a wider base with a less sloped marginal top is the core to a sustainable base of revenues that won’t fluctuate as much over time. Items 2-4 are under the negative minimization principle.

Of course part of the reason that this article seems to make sense is that it was written by a non NYT staffer who works for an opposition candidate. But I do think that the NYT and the administration are starting to realize that our current tax system is an unholy mess with huge dis-incentives (the highest corporate taxes in the world drive jobs overseas), that doesn’t raise revenue broadly, and has huge dis-incentives in terms of ability for companies and individuals to plan ahead.

Too bad it is too late in the game for them to do much more than talk about it. Also shame on the prior administration for never spending the political capital to attempt to change the system and reform it. They neglected to wield their power to make America more competitive. 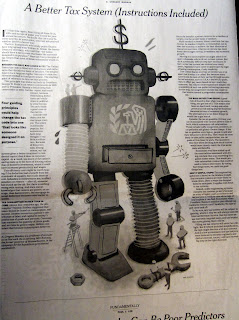 6 thoughts on “NYT Has A Decent Article on Taxes”