I can blame my intense, not to say passionate interest in 19th century American history – specifically, to the Western frontier to being exposed at a very impressionable age to two things, and both of them the fault of my parents. One of them was Laura Ingalls Wilder’s Little House series of books, which Mom and Dad began giving me as gifts at around the age of eight … by which time I could read confidently and omnivorously. I would get a single volume for Christmas or a birthday present, dated and inscribed – and I very clearly remember sitting down and reading them from cover to cover almost immediately. They gave me a pretty good sense of domestic life in the small-town mid-West, and what work was involved in keeping house, home and family together on the late 19th century frontier. 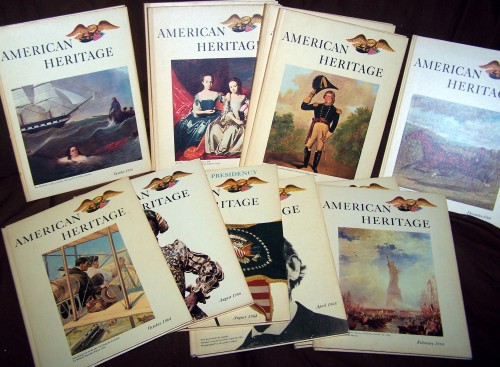 But the largest portion of that interest can be laid squarely at the foot of my mother’s subscription to American Heritage Magazine – that dealt with the grand events of the time, disasters and great men, of social movements and wars, the gold rush, the transcontinental railway, and the peccadillos of presidents. The magazine itself still exists, and Mom still has a subscription, but the current version is but a cheap, paltry and advertisement-poxed version of what it was when Mom first began subscribing… shortly after the beginning of the magazine itself. But there were only a handful of the very earliest, dawn-of-time-issues which I did not know very, very well. Then, it was a bi-monthly, or quarterly hard-back publication, with no advertisements. The articles were by serious, well-respected if seemingly obscure historians who managed to be interesting… without being the least bit sensational. I have the impression that most of them were passionately interested in their topic… whatever it might be, and wrote with enthusiasm equal to their knowledge of subject. The articles were well-illustrated with contemporary art or historic photographs, or an appealing mix of modern photographs, drawings and artifacts. I couldn’t have imagined a better introduction to the vagaries of our national history. These articles and essays ranged over three centuries of American history, events and movements, personalities, triumphs and tragedies great and small, obscure or well known, all mixed together, and I pretty well sucked up every word. Alas, the entire collection was burnt in the fire which destroyed their house in 2003. The entire print archive of American Heritage is available through their website, but sans the wonderful illustrations which were a key part in bringing each article to life.

This last weekend was the date for an enormous, PTA-sponsored book sale, which is held every year in an indoor basketball stadium. It is simply huge, as book sales go – it runs for three days, and the prices are a standard: 50 cents for paperback, 1.00 for hard-hound books, no matter what size, or quality. This year we marked it on our calendar and went on Saturday morning. I went straight for the tables where history and Texiana were piled high. This year, I found a dozen books that will be of use to me in scribbling my next novel: including a collection of Dame Shirley Clappe’s letters from Gold Rush-era California, F.S. Dellenbaugh’s Romance of the Colorado River, Bruce Catton’s Terrible Swift Sword, and Cecil Woodham-Smith’s account of the great Irish famine. I also found a dozen issues of American Heritage from 1964-1966. I can’t decide which was the more satisfactory; the other books or the American Heritage issues. The last three times that we checked out the sale, I was able to find replacements for books that my parents had and lost in the fire: a selection of the Time-Life Foods of the World series, and a selection of issues of Horizon Magazine – to which Mom also had a subscription and a nearly-complete collection. Like American Heritage, Horizon was also a hard-bound, and without advertisements, which a focus on world history and art. I’m fairly certain that I got a great deal of my education from these books and magazines – almost more than I got from college, certainly more than high school. It’s good to have some of them back.