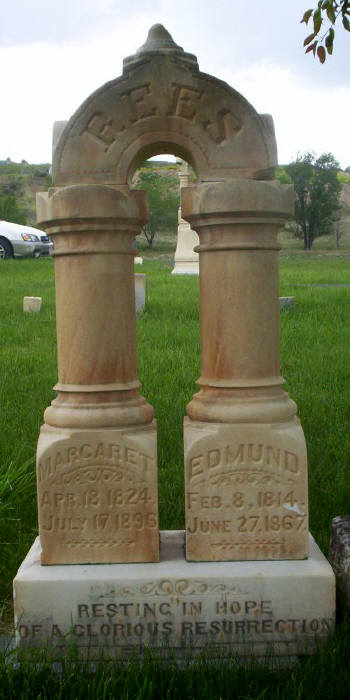 On September 22, 1859, Edmund Rees, wife Margaret, and the five Rees children (ages 12-18 months) arrived in Great Salt Lake City, the twelve-year old capital of the nine-year old Utah Territory. Edmund and Margaret were natives of Monmouthshire in the southeastern corner of Wales. While they’d both joined the Church of Jesus Christ of Latter-day Saints in the early 1850s, they didn’t gather to Zion and emigrate to Utah until Edmund developed asthma after years spent cutting coal in the Monmouthshire mines that fueled the early Industrial Revolution.

The Rees family started their journey with $500, the results of selling their home. $100 got them from Wales to Iowa: they left the old country on April 11, 1859, sailed across the Atlantic on the John Talbot, landed at New Orleans, and sailed up the Mississippi and Missouri Rivers to Council Bluffs, Iowa by steam boat. Another $100 got them two oxen, a covered wagon, a milk cow, and safely across the Plains to Utah.

Edmund was unfamiliar with handling livestock: the first time he put the yoke on the oxen, he put it on upside down.

So Margaret took over.

Family history records that Margaret Rees was “well built, quite stout, weighing about 155 pounds”. It was later reported that:

Mother Rees must have been quite a person. Family traditions remember her hiking to and from Salt Lake a number of times. Once in midwinter she made the trip home carrying a fifty—pound sack of flour to feed her family, who had apparently been made ill by some locally ground wheat. She is also credited with carrying two five gallon cans of water simultaneously, one in her hand and the other on her head.

The town the Rees family settled was Coalville, the current county seat of Summit County, Utah. It’s “Summit” County for a reason: it’s located in the middle of the Wasatch Mountains, itself only a small part of the greater Rocky Mountain chain. Salt Lake City is 4,226 feet above sea level. Coalville is 5,577 feet above sea level. Coalville to Salt Lake City and back is roughly ninety miles down and back up through Parley’s Canyon. Parley’s is relative broad but the stretch between Salt Lake and the modern ski resort of Park City is “relatively twisty and narrow and had to be dynamited to make way for I-80”. The drive is demanding even with Interstate 80. Snowfall in winter is deep. Car accidents with fatalities are frequent in the snow and ice.

Margaret made the trip on foot without snow shoes in mid-winter while carrying 50 pounds of flour.

That was the future. In the summer of 1859 Margaret had the same sturdy Welsh build but was ten years younger. Taking five pre-teens and an ill husband one thousand miles across the Great Plains was well within her power. Making that initial crossing, Margaret even discovered that she could milk the cow in the morning, let the motion of the wagon churn the cream all day, and serve butter to the family at night (unfortunately, after the Rees entry into the Salt Lake Valley, the milk cow wandered off and was never heard from again).

Brother Brigham called for members with coal mining experience to go up Parley’s and work a recently discovered coal strike. Compared to the well-watered Eastern States, trees are scarce in arid Utah. Coal was necessary to keep Salt Lake City warm in the winter. So up Parley’s these brothers and sisters in the Gospel, many of them recent Welsh converts like Edmund and Margaret Rees, went. The Rees family was among the first nineteen families to settle. Margaret was the first white woman to endure that first Coalville winter. It’s very cold in those mountains and its even colder when you live in a dugout.

Even when they were able to build a more permanent dwelling, there was little rest:

Coal mining was hard physical work. Men worked twelve-hour shifts after sometimes walking or riding a horse several miles to and from the mine portal. Men performed manual labor with pick and shovel…The mines closed on Sundays, which were the only break in a long week for the men.”…In addition to the heavy manual labor of mining, hanging over the workers heads was the constant prospect of being laid off, not to mention the hazards of working in a mine.

Margaret’s work load was heavy since Edmund was away earning wages in the mine. But Edmund died on June 27, 1867. Family history records: “This left Margaret with 6 children to raise and feed in this strange land”.

The history of Coalville observes:

Because of so many fatal accidents, Coalville was different from other towns because it had a greater share of widows than the average Utah settlement…The widows and their children struggled along until the sons got old enough to work. Widows wanted to be independent and self sufficient, but there were few ways for women to earn money in that time. Because many widows were reluctant to ask for help unless absolutely necessary, farmers made a practice of leaving certain portions of their fields unharvested so the widows could gather their own wheat, without actually having to ask. Businessmen helped out by offering employment to sons of widows when they had jobs the boys could fill.

Now Margaret not only faced cold but other threats to the survival of herself and her children:

Fifty years after the first settlers arrived, someone asked the old-timers present to write down what they best remembered about the early days. The grasshoppers and the frost stood out most in their memories as being the most difficult to cope with.

The grasshopper was the dread Rocky Mountain locust:

The Rocky Mountain locust (Melanoplus spretus) was the locust species that ranged through almost the entire western half of the United States (and some western portions of Canada) …Sightings often placed their swarms in numbers far larger than any other species of locust, with one famed sighting having been estimated at 198,000 square miles (513,000 km²) in size (greater than the area of California), weighing 27.5 million tons, and consisting of some 12.5 trillion insects – the greatest concentration of animals ever recorded, according to The Guinness Book of Records.

Margaret had ten acres of wheat planted. It was a fine crop and she was proud of it. It meant food for her family that winter. One night Margaret heard a rushing noise, something like an airplane makes overhead today. She wondered what it was and went outside, followed the sound until she located it in her wheat field. It was grasshoppers. At daybreak she went out to the patch again only to find that every green blade of grain was eaten off.

She walked back to the house thinking how she would tell her husband forgetting for the moment that he was dead. The children were still asleep. She sat down on a bench outside the door and broke down and cried. What would they do for the winter’s food? Hearing a noise, she looked up to see an approaching four—mule team driving up. It was remnant of Johnston’s army [probably not since the last of that force withdrew from Utah over ten years before at the beginning of the American Civil War]. They stopped and asked if she had any milk to sell. She did have a cupboard full of milk in pans, heavy thick cream and fresh butter and eggs. The men were bighearted Irishmen. They heard her story and for every pan of milk that she set out they threw her down a sack of provisions and when they left she had enough food for the winter. She had prayed and the Lord did provide.

The Lord provided even more:

The last major swarms of Rocky Mountain locust were between 1873 and 1877, when the locust caused $200 million in crop damage in Colorado,Kansas, Minnesota, Missouri, Nebraska, and other states. The cause of their extinction was probably the plowing and irrigation by settlers that disrupted the natural life cycle of the insects in the very small areas they existed in between swarms. Reports from this era suggest that farmers killed over 100 egg cases per square inch while plowing, harrowing or flooding. More likely the extinction was by a new plant by farmers like Neem tree with poison meliantriol already known for stopping locust spreading…

…the species was apparently extinct, with the last recorded sighting of a live specimen in 1902 in southern Canada. And because no one expected such a ubiquitous creature to become extinct, very few samples were ever collected (though a few preserved remains have been found in Grasshopper Glacier, Montana). Though grasshoppers still cause significant crop damage today, their populations do not even approach the densities of true locusts. Had the Rocky Mountain locust continued to survive, North American agriculture would likely have had to adapt to its presence (North America is the only continent without a major locust species outside of Antarctica)

Margaret endured to the end, seeing six of eight children reach adulthood and prosperity (11 year old Sarah and 7 year old Morgan died within a month of each other in late 1871-early 1872 from diphtheria). 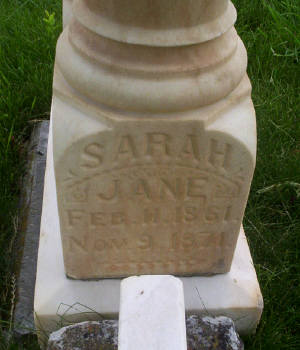 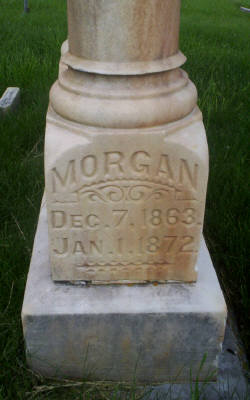 Margaret outlived Edmund by 29 years, living to 72 despite dwelling high in the arid mountains of frontier Utah. She died on July 17, 1896, a few months after Utah became the 45th state on January 4, 1896 and just six years before her old nemesis Melanoplus spretus was last seen on this Earth.

19 thoughts on “Grasshoppers and Frost”