In general, I am not in favor of government regulation of pretty much anything, since most of the time the rules don’t make sense or favor certain parties, and/or are written by people that don’t know what they are talking about. But I think what I saw Saturday night was an exception that I am willing to make. What you see below is our fight team head coach taping the hands of one of our fighters. As an aside, we had three fighters in Mixed Martial Arts (MMA) competition Saturday night and went 3-0, with two knockouts and one submission. 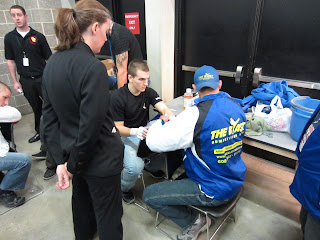 I have been backstage many times with the fighters, but there was never anyone watching or looking around. The woman dressed in the black is a state of Wisconsin inspector. She was making sure that the taping of the hands was legal.

There are rules now on how you can tape hands – the most important being that you can tape between the knuckles, but not over them. This disallows the “casting” of your hand, which effectively turns it into a club. The regulation tape is only 1″ wide.

After the hands were taped, the inspector signed the tape. Then the glove goes on over the taping, and that is taped as well – and the inspector watched me doing this and signed off on that too. After you are taped and signed, no fighter was allowed to leave the locker room area without having an inspector escort (typically to the restroom, or to the cage to inspect for footing and the flex of the fence).

In the old days, none of this happened. We just taped the hands, one of the guys running the fights would glance at it, and that was that. There were no locker room regulations, or anyone from any authority back there. The inspectors also checked everyone’s shorts and one guy had to cut some laces off that weren’t able to be tucked away.

The pre-fight meeting was better too. The referee clearly explained all the rules (there are many more than you think) to the fighters and the coaches and corners. The promoter of the fights also said that no taunting of the opponent would be tolerated, and that if you did taunt, you would never appear on the card again. And that went for coaches and seconds as well. Celebration, OK – but taunting, no way.

Security was also tighter. I had to show my “seconds” license from the State of Wisconsin to receive my passes to enter the locker room and to be cageside. By the way there is no test to be a second. Just fill out a form and send in $40.

As I mentioned in the beginning of the post, I typically disdain the government getting into stuff like this, but every single person there from the State knew exactly what they were talking about, knew the rules, and were extremely professional and helpful. There were a lot of questions since this was the first time a lot of us had seen a state presence such as this and all were dealt with fairly.

The fighters have to go through a much more rigorous testing to get their license; blood work, doctors inspections and more.

MMA is huge and getting bigger every day. I think that a set, established, group of rules is a good thing for the sport, and will help keep idiots out of the ring and out of the way.

21 thoughts on “In Favor of Government Regulation”