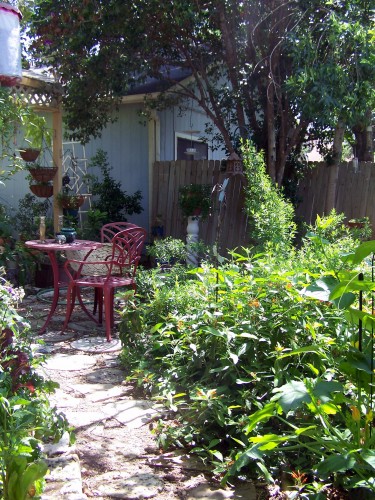 This week in the neighborhood where I live was designated for the annual bulk-trash pickup – so residents were notified a week or more ago. Once a year we can put out on the curb … well, just about anything except concrete rubble and chunks of stone. The city sends out a couple of long open-topped trailer trucks, and a special truck with a large mechanized claw that reaches down and gathers up the bulk items.

Well, all of those who have not been picked over thoroughly by the pros … and the other neighbors, of course. This year, we were amazed at how little was left for the city crew, as the professional junkers had already descended like a swarm of locusts. Usually there are only two or three; they are easily recognizable. They are the people driving battered pick-up trucks, sometimes towing a rough flat-bed trailer of the kind usually used to haul yard-maintenance equipment – and pick-up and trailer piled tower-high with salvage. Rusted-out barbeques, metal frames of this or that, battered furniture of all kinds, upholstered chairs with gruesomely stained upholstery and stuffing and springs bursting out of the cushions, clapped out appliances and monitors, cheap furniture with the thin veneer peeling off the disintegrating pressed-board that it is made out of, and construction grade kitchen/bathroom cabinets that have been replaced by upgrades …

Yes, and if I am sounding very familiar with the contents of what is put out in front of my neighbor’s houses … it’s because I am. We inspect the bulk-trash offerings quite thoroughly ourselves, and have shamelessly selected a number of still-useful and/or salvageable items for our own use. At least half of the ornamental elements in our garden were picked out of trash-piles, including a good number of large pots, plant-hangers, plant stands, a standard to hang a banner from, shepherd’s crooks, bird-houses, the big pottery chiminea, a small ornamental bench … and those that weren’t gleaned from the bulk trash were bought at yard sales for pennies on the original price. So, I have that funky-junky shabby chic style going in the garden. It works, and it’s cheap. A good number of the plants in it were also rescued from here and there.

This year it seemed like there were a much larger number of junkers, circulating. As soon as it hit the sidewalk, within minutes – or hours at best – the battered pickup swooped in, and the item was gone. We noted that one neighbor had put out three or four clapped-out vacuum or carpet-cleaning units; they were gone by the next day. I had read somewhere or other, of a tinkerer who would scoop up items like this, repair and clean them, and sell them for a small sum on eBay, and was doing very nicely out of it, too. There are gifted amateurs, people like my Dad who could take apart an appliance and put it back together again and have it work, but there wasn’t – well, until a bit ago – too many many professional small-mech tinkerers working the retail trade any more, not when it’s usually cheaper to throw it away and buy a new one. When I wrote about this once before, commenters waxed lyrical about items they had salvaged entire, or rehabbed for their own use; it’s all to the good, you know – it’s all being recycled, one way or another. Better to fix it up, and use it again, than let it take up space in the dump.

This year, we put out a garden chaise lounge made from lengths of two-by-four, which had weathered to the point that it was near to falling apart. We had actually picked it out of a bulk-trash pile five or six years ago, but now the legs and armrests were rotting away, the squirrels had raided the cushion (bought on sale at Lowe’s at the end of the season) and I didn’t want to take the time or effort to repair it. It was gone by the next morning. My daughter thinks another neighbor scooped it up. It will be kind of amusing to see if it continues going the rounds. (Crossposted at my book blog, and at www.ncobrief.com)