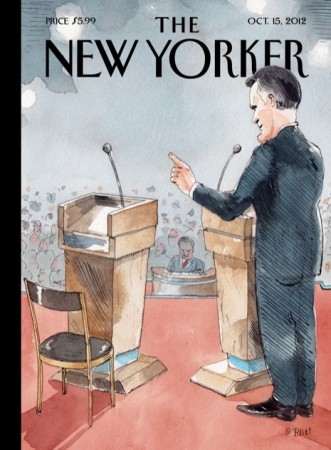 The reverberations are still going on after the Wednesday debate. The theme coming from the Obama campaign is that Romney did not tell the truth about his policies. Most of the discussion on the non-campaign left is like Bill Mahers’ who said “It looks like he took my million and spent it all on weed.”

One of the most peculiar reactions was at the U of Wisconsin the next day. Hundreds of UW students were filing into an Obama on-campus campaign rally and were asked by a Breitbart writer if it was unfair that Obama couldn’t use his Teleprompter in the debate. Amazingly, most of the students agreed. What would a Teleprompter do ? Would they stop the debate for a few minutes while Obama’s handlers thought of a good response?

The polls will take a few more days to show the response but already something is going on. A poll of Illinois’ 10th Congressional district last August was ignored but another poll now suggests that Illinois might be in play in this election.

There is a new poll out of Cook county that should make President Obama, Robert Gibbs, David Axelrod, and the rest of the Obama reelection team nervous. In Illinois’ most populous and most Democratic county things are not looking so good for team Obama. In Cook county, home of Chicago, Obama only leads Mitt Romney 49 to 37. This is bad for Obama because he needs as big of a lead as he can get from Chicago Democrats in order to hold off the fact that he will lose the rest of the state, and in some areas of Illinois by a lot. Things are so bad for President Obama in Cook county that the suburban areas are breaking for Romney 45-38(the City of Chicago still goes to Obama 60-29).

California is still deep blue but gas is hitting $6/ gallon and expected to keep rising. That will hit the Obama voters more than anything else. Romney should keep pounding on the XL pipeline and domestic energy.

The next debate is supposed to be on foreign policy and it is interesting to speculate on what Obama will do to recoup his loss this week. First debates have been weak for previous presidents. Reagan was criticized for looking old and a bit out of touch in his first debate with Mondale.

Still, there have been a long line of incumbent presidents who bombed their first debate.

Reagan, H.W. Bush, Clinton and Bush all had middling to bad receptions after the first debate as an incumbent seeking re-election.

Advice for Obama will be plentiful next time.

If Obama wants to seal this election win from behind a podium, the ball is in his court alone. He’s got to recover and rebound in the next debate.

Still, Obama needs to get a Red Bull into his system for next time, because former incumbents with a bad second debate — Ford, H.W. Bush, and Carter come to mind — don’t tend to get their second term.

I expect him to try to be more aggressive. Foreign policy is not a good area for him but, no doubt, we will hear about Osama bin Laden and Romney’s inexperience. He runs a risk of further weakening the traditional Democrat support from Jewish voters (See above about Illinois) if they get into the Israel and Iran situations. Romney has to avoid looking as though he wants war with Iran and I expect Obama to bring this up. Still, Romney has good points about the failure of Obama to support the people of Iran when they were demonstrating against their own government, and the disclosures about intelligence that came from the White House.

The second debate is Romney’s chance to close the deal and how he conducts himself will be critical. So far he and his campaign have done a very good job. I was not one who complained that he was not aggressive enough. Charles Krauthammer thinks he should have given a foreign policy speech sooner, after Benghazi, and maybe that is right but he plans one Monday and the tide seems to be turning right now. I hope Romney avoids anything that looks like doubling down on Afghanistan. That is a loser and I think we need to get out. In fact, I think we need to get out of Pakistan and tilt toward India.

I’ll bet the audience for the VP debate this week will be larger than usual as Paul Ryan makes his national appearance for those who haven’t been following the election closely until now. I expect he will do very well. Biden is an old school politician but he lied his way through the debate with Sarah Palin and she did not point them out. Ryan is another numbers guy, like Romney, and won’t let him get away with it.

On to the next debate

8 thoughts on “Reflections on the debate”