I initially posted about the Aerojet ruins after my first visit more than five years ago. I’ve been back a few times since, most recently in July. The site is mostly the same but continues to deteriorate due to neglect, vandalism, a harsh environment, and in some cases removal of equipment as salable scrap by some state agency or other. For example, the machinery visible along the inside wall of the rocket test shed in this 2008 panoramic photo had been pretty well stripped by this July:

Here’s how the inside of the shed looks now, facing away from the wall with the machinery: 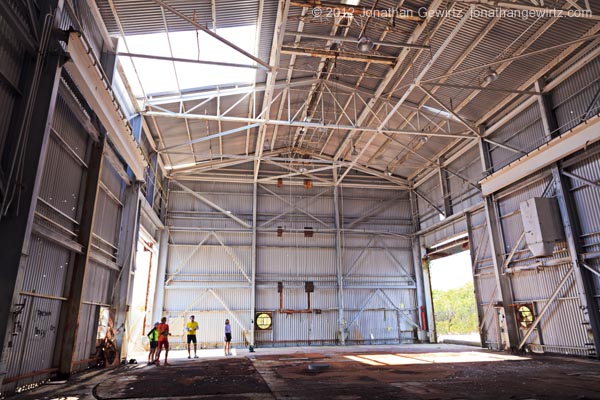 Note the circular steel cover on the floor, that almost fills the width of the shed. This cover prevents people from falling into the rocket test pit which is quite deep. Several test firings were conducted here in the late 1960s. The shell of the rocket motor was mounted vertically in the pit and propellant was poured in around a cylindrical core and allowed to harden. After the propellant hardened the core was removed and the rocket nozzle was installed, facing up. The corrugated metal shed was mounted on rollers and was moved out of the way before each test. There is much more information, including a photo of a test firing, at this page at astronautix.com. Note the size of the shed relative to the rocket exhaust plume.

This is the inside of the test pit as photographed through a rust hole in the steel cover: 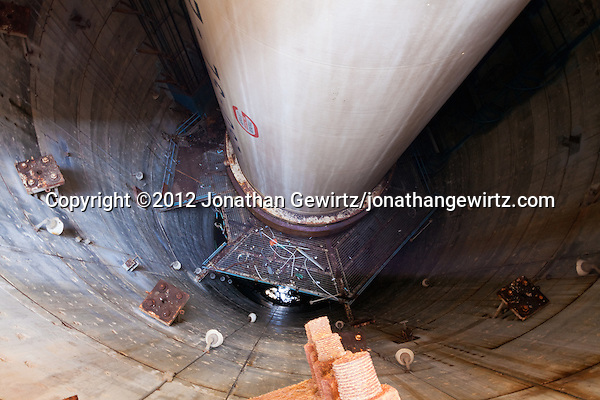 It is a big hole. (The comments on my 2007 post include reports from people who climbed down into it. I suspect that many other people have done so as well.) The white cylinder in the middle is the shell of one of the Aerojet 260-inch diameter motors, probably the SL-2 SL-3 mentioned in the Astronautix article linked above. It might be nice to see it, and perhaps the surrounding infrastructure, preserved as a technology museum but it seems unlikely that this will ever happen.

8 thoughts on “Return to Aerojet”