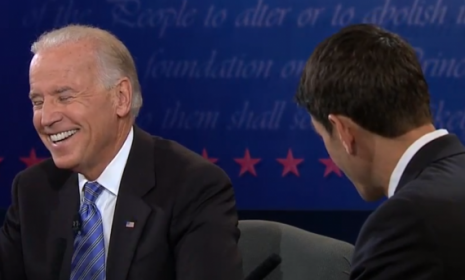 A clownish Joe Biden mugged, groaned and interrupted Paul Ryan for 90 minutes last night. It was an odd spectacle but, apparently, just what the Democrats wanted. He lied about the Libya story and now Bill and Hillary Clinton may be thinking rebellion. Biden strongly suggested that the State Department was to blame for the murders because they did not ask for more security, in spite of the testimony before Congress the day before. If Hillary thinks she sees the bus coming, she may jump ship and it won’t be pretty.

With tensions between President Obama and the Clintons at a new high, former President Bill Clinton is moving fast to develop a contingency plan for how his wife, Secretary of State Hillary Clinton, should react if Obama attempts to tie the Benghazi fiasco around her neck, according to author Ed Klein.

Biden also lied about Iran and their nuclear ambitions. He dismissed the danger of doing nothing. He said they do not have a “delivery system.” They have a delivery system named Hezbollah. Iran may not have an intercontinental ballistic missile that can reach the US, yet. If Iran were to choose to attack the US, a container ship and a US port are much more likely to be involved than a new missile. Certainly, Israel is within reach as are the countries of Europe. Saudi Arabia is within reach. The Sunni-Shia rivalry is sufficient motive but the other reasons should not be ignored. Iran is ruled by a sect of suicidal maniacs.

Ryan capably described the Romney-Ryan tax proposals and his Medicare plan. I expected the abortion question and I thought it was well handled. Biden, of course, lied about the administration’s rules for health insurance coverage of contraception and abortion. That is not a big issue for me as I am pro-choice but the dishonesty is annoying. The “47% issue” and Ryan’s mention of a “30% who are takers” will not bother many people who agree and the offended are likely Obama voters no matter what happens.

It will be interesting to see what the result will be. The left, of course, is excited by the nasty tone Biden adopted.

On their $5 trillion tax cut, Romney/Ryan really need to either start naming the loopholes they’d close to pay for it or just admit they can’t make it revenue neutral without whacking the middle class. The VP was appropriately relentless on this point. Even I’m starting to feel sorry for them every time someone brings up this little flaw in their plan. I suspect I’m not alone in realizing that this country simply can’t afford to elect people promising a tax cut of this magnitude who, when it comes to paying for it, essentially say “trust us, we’ll find a bipartisan solution.”

The “$Five trillion tax cut” has been thoroughly debunked, including Stephanie Cutter’s retreat from the claim.

But, as I pointed out, Gov. Romney has already taken capital gains and dividends-for example-off the table. Now, here’s the revealing part: Larry said, and I know many in the investment community, including Mitt, feel exactly the same way, “I don’t consider those loopholes.”

So, here is a lefty who wants to raise taxes on investment income and capital gains. I don’t see enough responses pointing out that this income has already been taxed as ordinary income. Mitt Romney and most investors had salary income, taxed at the rates of the time, which they saved and invested. The capital gains and dividend income is income that was already taxed once. The left simply does not understand this.

Ryan kept his cool and Biden played the fool. Ann Althouse was impressed as I believe many women were impressed.

As I said, I’m tired of the yelling. I found the debate really hard to watch, but I kept watching because I was committed to live-blogging. Even still, I got catatonic. There was a point when I didn’t write anything for 20 minutes and then I said:
Biden has been yelling at Martha Raddatz for the last 15 minutes (as the subject is war). It’s so inappropriate!

The previous post had been:
The stress level is rising. Biden is so angry. Why is he yelling? Ryan needs nerves of steel not to lose his cool. I’m impressed that Ryan, when he gets his turn, is able to speak in an even, natural voice. It’s hard to concentrate on the policy itself, because the emotional static is so strong.

That shows how I felt: pain. So here’s my question. Ratings were down, I see, but when were the ratings taken? In the beginning? How did the ratings drop off over the course of the 90 minutes?

I have seen many comments about people, especially women, turning off the debate because of Biden’s rudeness and blustering. The ratings were down and the question is when were the ratings surveyed ? Of course, last night was also a big sports night. I think Ryan did better than the initial impressions suggest.

If Obama uses the Biden debate tactic as a model for next Tuesday, the election may well be over.

23 thoughts on “Joe Biden and the debate”