I recently was in five major cities in India. I was struck by driving in India and how different it was than driving in the western countries.

They have vehicles in India that I haven’t seen before. This is a “tuk tuk” or auto rickshaw as they are formally called. They are 3 wheelers with a motorcycle in the front and a seat in the back for passengers. Note that the streets are empty because this is a secured area – the India Parliament is in the background – you cannot linger here – and this was about the only light traffic area I saw in India except on some of the major tollways (briefly). 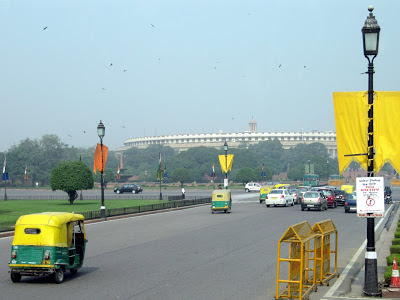 The tuk tuk is yellow and green because that is the color of vehicles that have been converted from regular fuel to Compressed Natural Gas (CNG). This was done in order to make the air cleaner in major Indian cities such as Delhi. 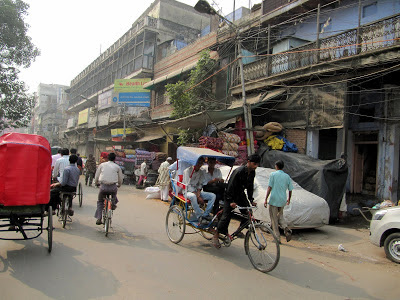 One item that makes Indian driving so much more complex than in first world countries is the bewildering array of vehicles on the road from horse and camel drawn carts to bicycles to rickshaws to tuk tuks to scooters and everything else. There are vehicles barreling down the road as fast as they can and those that can’t move hardly at all, sharing the same space. 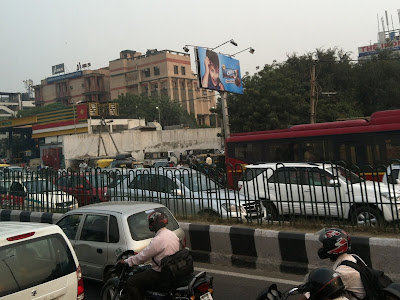 Scooters and motorcycles were everywhere, mixed in with the cars. We saw a family of five on one scooter, with a child in front, the male driver (with a helmet), another child, his wife (sitting sideways), and then another child on the very back.

In India they don’t use lanes, they just crowd together and cut each other off, honking their horns to signal all the while. To Westerners it looks like chaos but it obviously works in that an entire country is getting where they want to go. I heard of a campaign called “Lane Driving is Sane Driving” trying to change behavior but I could see no evidence of it at hand. 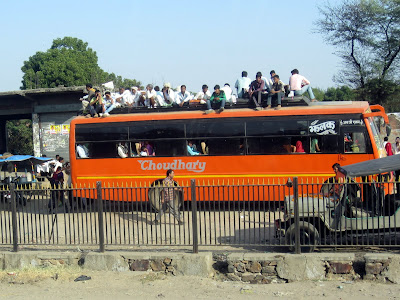 It wasn’t the rule, but I did see many people on top of, hanging out the rear of, or riding along the running board on cars and buses and trucks. Sometimes these vehicles get going pretty fast and hard stops seem common in India with all the traffic so I don’t know how people hold on but apparently they do. 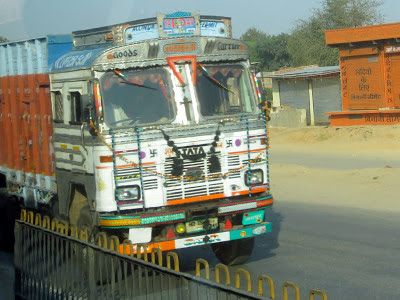 The trucks were often decorated, especially since it was Dawali season. They rarely seemed to have the traditional “18 wheeler” trucks that we use in the states.

When you hear an antecdotal story about a country needing to invest in “infrastructure”, it seems like an abstract concept. When you are there on the ground, it seems more obvious.

We rode on some beautiful multi lane highways in India. We drove on the Yamuna Expressway, which connects Delhi to Agra (a large city by Western standards with the Taj Mahal). This road was relatively empty until we neared Agra and took hours off our trip.

On the other hand, the roads in Bangalore are notoriously woeful. The airport is situated far from the business areas and the roads haven’t caught up yet. Imagine leaving O’Hare or to be fair Indianapolis airport for a size comparison and being on essentially a 2 lane rutted road almost immediately outside the gate packed with local vehicles of all sorts and cows to boot. It took 2+ hours to get to the business district and was only a bit better on the way back.

One insidious effect isn’t just the AGGREGATE TIME of the commute but the STRESS LEVEL of the commute. Living in Chicago for decades with its horrible traffic I am used to commute times that stretch into the hours (especially during snow or rain) but you can at least just sit there and listen to the radio or talk on your phone. In India, however, every second of the drive you need to jockey forward for a position on the roads or you will get run over – there is no “relaxing” even for a moment. If I had a 90 minute commute I would get home completely exhausted or probably I’d relent and just pay a damn driver to do it for me.

You can see signs of progress and continuing to build major highways but there is much more to do especially as rising economics means more vehicles of all sorts from scooters to tuk tuks to cars to trucks on the road. It will be difficult for India to catch up to this rising demand for transportation.