I have been frustrated by the antics of the AGW alarmists. Scientific American, for example, has lost whatever reputation it once had for objective science. (pdf) In an another example, the actions of Michael Mann should make for an interesting discovery in his suit against Mark Steyn.

Today, I find a nice discussion of global warming and cooling over the past epoch. The Greenland ice cores are, or should be, the gold standard of temperature measurement. For example.

Summary:
Records of past temperature, precipitation, atmospheric trace gases, and other aspects of climate and environment derived from ice cores drilled on glaciers and ice caps around the world. Parameter keywords describe what was measured in this data set. Additional summary information can be found in the abstracts of papers listed in the data set citations.

Now, to the data.

Wikipedia is not reliable on the topic of global climate change because they have editors and contributors who are not above altering information to support the political issue of AGW. However, even they have included an honest chart showing the Little Ice Age and the preceding Medieval Warm Period. 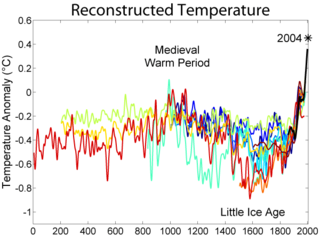 Here is shown the Medieval Warm Period although their chart includes the spurious late 20th century warming which is based on altered data. Professor Mann, however, has no such period shown in his chart.

Note the absence of the warm period in his chart. This has been widely debunked, especially by statisticians, and he is suing Mark Steyn, a conservative writer for libel on very shaky grounds. Discovery should be interesting in that case and I would not be surprised to see Mann withdraw his suit. If he does so, Steyn and the other defendants should file a claim for their legal costs. I was once involved in a malicious prosecution case and I have no sympathy for Mann and his enablers at Penn State.

in order to defend itself NR would be entitled to seek discovery, and in the process obtain access to e-mails and other records that Mann has, thus far, resisted disclosing in various freedom-of-information suits prompted by ClimateGate.

And that is the problem for Mann. Possibly a problem for Mann that is. The lawyers defending NR get to crawl all over all those documents that he’s been so careful about making sure have not been released. Now, as we know absolutely, Dr. Mann has not been hiding anything at all, not even the odd decline, in his academic work.

Here is a chart of temperatures on a longer scale. This shows the ice core temperatures from 800 AD to 1800, a thousand years. The 1850 end of the Little Ice Age is clearly seen and the 20th century warming is almost certainly a result of this cycle, which has nothing to do with CO2 or the Industrial Revolution. The Medieval Warm Period peaks at about 1000 AD, the peak of the Norse settlement of Greenland.

The Little Ice Age has been well documented in paintings and literature. For example: 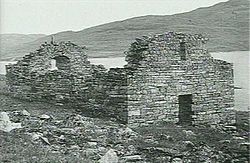 This Norse church in Greenland contains the last record of the settlement. A marriage record dated 1408. After that, the cold closed in.

We can go back to the beginning of the Holocene epoch and what do we see ?

At the very beginning, we see the temperature rise from the last major ice age. Throughout this period, also known as “The Age of Man”, we see an average temperature that is close to the maximum in the second graphic. Remember, these are Greenland ice cores so 32 degrees is normal.

In fact for the entire Holocene — the period over which, by some odd coincidence, humanity developed agriculture and civilization — the temperature has been higher than now, and the trend over the past 4000 years is a marked decline. From this perspective, it’s the LIA that was unusual, and the current warming trend simply represents a return to the mean. If it lasts.

Some worry that another ice age is coming. Certainly this was a worry in the 1970s.

Journalism school is not strong on science or statistics.

Let us think about an even longer time line.

Here are ice cores from Antarctica showing the pattern of the last 400,000 years. The climate seems to be subject to regular oscillations on a scale of about 100,000 years. In fact ice ages seem pretty much normal for this planet.

In fact, this one seems almost benign compared to history. The issue of CO2 effect on climate is obviously (to me who took calculus) a benign influence. There have been some attempts to quantify this, but data is weak and bias is strong.

In other words, we’re pretty lucky to be here during this rare, warm period in climate history. But the broader lesson is, climate doesn’t stand still. It doesn’t even stand stay on the relatively constrained range of the last 10,000 years for more than about 10,000 years at a time.

Does this mean that CO2 isn’t a greenhouse gas? No.

Does it mean that it isn’t warming? No.

11 thoughts on “Global Warming and Cooling.”