(Herewith for a Friday, from my archive of military posts, an examination of the custom of ‘Dining Out’. This came from long-ago archives of The Daily Brief, when I was attempting to educate the general readership on some arcane practices and traditions in the military. Many of the essays are collected in Air Force Daze – including this one.)

Every once in a while an Air Force unit or organization takes it into their head to hold a formal “dining in” or “dining out”, to mark an anniversary, host a very important visitor, or mark a singular event. The formal rituals of this event goes back to the misty pre-history of the USAF, before the glorious day when it was established as a separate and co-equal service, when US Army Air Corps commanders in Britain during World War II noted the pomp and circumstance of RAF formal mess dinners, and wished to adapt some instant but awe-inspiring traditions for their own service. Legends have it that the first formal “dining in/dining out” events were very closely modeled on the RAF model, but as the Army Air Corps evolved into the US Army Air Force, and then into the US Air Force, so did the formal mess dinner. It continues evolving, or mutating to this present day, to a form warped out of all recognition to the originators, in response to changing circumstances and societal preferences.

A “dining in” is for service members only, sometimes officers or NCOs only, but the “dining out” permits civilian guests and spouses. Traditionally, the uniform for the event was the “mess dress” (with suitable evening wear for civilians), which most junior enlisted troops can neither afford or have occasion to wear oftener than once every couple of years or so. A long time ago, the NCOs at Misawa AB hosted the Chief Master Sergeant of the Air Force at an NCO dining in, and put a great deal of effort into outfitting the junior airmen and NCOs in the proper form— black trousers (long skirt for the females) silver cummerbund, tucked shirtfront, and either a black or white cutaway jacket (depending on season) with relevant rank and medals. Later on, they went to plain dark blue, year round, as the white jackets made any male assembly look like a headwaiters’ convention, and permitted regular class As with a plain white shirt and black tie to substitute for formal mess dress, absent the name tag; for in the mess, we all know each other. Latterly, the BDU dining-in was developed, with all the form and ritual, but allowing guests the equal informality of jeans and flannel shirts, and interesting venues such as airplane hangers decorated tastefully with sandbags, bunkers and concertina wire. The format is strict, the players rehearsed, and the successful ones carefully scripted. Everyone is on their best behavior, for the punishment for violating the wise and generous rules of the Mess— as presided over by the august President of the Mess, assisted by one or two vice-presidents— is a trip to the dreaded Grog Bowl.

The tables for the dinner are formally laid, with a head table, presided over by the President of the Mess, and a smaller table at one side for the Vice-President, or Presidents: the president is usually a senior officer, and the Vices the most junior. Sometimes there is a table set out for the Grog Bowl, and sometimes it is wheeled in, ceremonially as part of the opening of the Mess. The guests and members of the mess congregate in the anteroom. If they are wise and wily in the ways of this kind of thing, they are studying the “Rules of the Mess” printed in the program, surreptitiously removing their nametags, if they have forgotten to do so beforehand, paying a quick call on the facilities and memorizing the proper format for addressing the President of the Mess. There is no leaving the Mess, once it has been convened, nicotine fit or bursting bladder notwithstanding.

When the Vice-President walks around ringing the chimes, that is the signal for everyone to silently assemble, standing behind their chairs in the dining room. The wise and wily will have ditched the remainder of their pre-dinner, pre-assembly drinks in the anteroom, for Bringing A Drink Into The Mess, having a name tag, or forgetting to ask permission of the Vice to address the President of the Mess; all is a high crime and misdemeanor, punishable with a trip to the Grog Bowl.

When everyone has entered, and found their places at the tables, the President calls the Mess to order, requesting the Color Guard to post the colors, and the presiding Chaplain pronouncing the invocation. The President calls for all present to charge their glasses. The President and the Vices then call for the various toasts: to the colors, to the Commander in Chief, to the Chief of Staff of the Air Force, to the Division commander, and finally to the ladies. Usually, the most sternly militant or the senior female present will then reciprocate, and propose a toast to the gentleman. The proper response to these toasts is a chorus of “Hear, hear!” and a quick swallow of whatever one’s wineglass is charged with, being careful to not drain one’s glass, for that is an Offense Against the Rules. (So is applauding; instead, one taps one’s spoon against the water glass.) The distinguished guests at the head table are introduced and toasted, and then everyone sits down, for the fun is about to begin.

The President and the Vice will have been taking note of those who have violated any of the intricate Rules of the Mess, in dress or conduct, especially those of the more august ranks and experience, who must be presumed to know better. They are called by name, and directed to the Grog Bowl.

Rituals for approaching the Grog Bowl, and the Grog Bowl itself have been refined, if that is the word that can be used here, as well as and the recipe for the Grog itself, according to the sadistic whims of the President of the Mess. I attended an anniversary “Dining Out” where the President mixed the grog himself, to a secret recipe in which tequila, prune juice and Tabasco sauce featured heavily, topped off with a chunk of dry ice, and served out of a mock-up of a field latrine, complete with a roll of toilet paper. The customary grog-bowl is, of course, a toilet, carefully scoured and stoppered, and set on a table with plenty of small punch glasses for the defaulters. Floating dry ice and Baby-Ruth candy bars in it lends that authentic touch that Martha Stewart would never have thought of. Since getting hammered on grog is a distinct possibility for socially inept repeat offenders, and there are always non-drinkers at such an event, a non-alcoholic grog bowl, or “unleaded” is obligatory. If possible, it is even viler tasting than the regular or “leaded” grog.

Properly drinking the punishment shot of grog is a matter of varying ritual: at one event, approaching the grog-bowl involved a combat crawl under a concertina-wired barricade, and another, it was facing the Mess and shouting “Unnecessary zoom! Unnecessary zoom!” before tossing it down, and reversing the cup over your head to prove it is empty, before marching back to place. Members of the Mess may nominate from the floor, as it were, others whose offenses have been missed by the Vice and the President. Such nominations are fraught with peril for the complaint must be made according to the strict format, requesting permission of the Vice, to speak to the President, and once receiving permission, making the complaint in a coherent, witty, and most importantly, completely valid fashion. It is not entirely unknown for the target of a complaint to take down his or her accuser to the Grog Bowl by riposting with a counter-complaint. One is well-advised to have a nine-pound brass pair before attempting to take down a senior officer or NCO, someone at the head table, or a guest of the Mess, but such attempts constitute the most amusing part of a dining-out, for anyone inclined to sit back and think of it as a form of legitimately sanctioned sadism.

At a certain point, the President will declare that decorum has been restored, that the chief offenders have been justly dealt with, and it is time to close the grog bowl, for the Mess hungers for sustenance. Bringing forth the main course or a sample of it for inspection by the Vice usually involves a bit of theatricality. In the case of a dining-out which your obedient author planned and scripted the covered tray with a sample meal on it was brought to the Vice’s table by the sergeants at arms clad in chemical decon gear and masks (thoughtfully loaned by the Base fire Department) and carrying a small fire extinguisher. When the meal was uncovered, one of the sergeants at arms fainted, to be dragged out by the other.

When the Vice pronounces the meal meet and fit for consumption, the meal is served to the Mess at large, the head table being served first. The President, at the request of the Vice usually recesses the Mess for a short break, when most everyone has finished the main course. The President and the head table file out, and then everyone else dashes for either the facilities, or to grab a smoke before the chimes ring to reassemble the Mess for dessert, coffee and the after-dinner speeches and presentations – which may be dull, or amusing, depending upon the facility of the speaker – and the entire evening may end in a genteel fashion, or in food fights, excessive consumption of alcohol, and games of “dead bug”, “carrier landing”, or races with serving carts. It all depends on the unit or activity involved, and how much mayhem can be tolerated.

So, to recapitulate, a “dining in/dining out” is an organized exercise wherein formal military mess dinners of the 19th century are gleefully parodied, and obscure and convoluted rules invoked in order to force certain people in attendance to drink a disgusting brew served out of a toilet.

Hey, we take our fun where we can find it.

(As an extra bonus for anyone who has read this post to the very end – behold Sgt. Mom in mess dress, headed off to the Navy Ball at Misawa AB, early in 1980.) 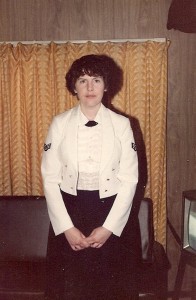 8 thoughts on “Military Rites, Practices and Legends – Dining Out”