Recently I had a chance to operate a Parrot AR.Drone 2.0. The drone is a “quad” helicopter with four rotors that you can control through your iPad. I was extremely impressed with the technology and had a lot of fun operating the drone. Below is a photo of the drone in flight. 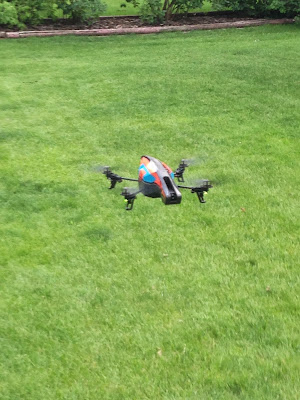 And below is a picture of the drone at rest. The “bumpers” that protect the rotors are not being used because we are operating the drone outside free of obstructions. 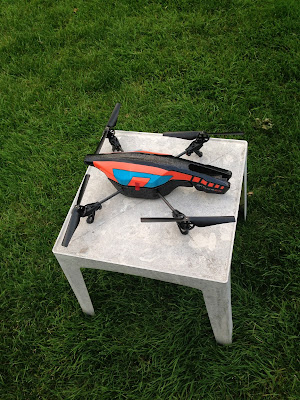 The drone represents a remarkable confluence of various technological capabilities into a small and cost efficient package. The drone has its own wi-fi network that you use to connect your iPad to the device. Thus you are basically leveraging wi-fi to provide a network and this is a likely range limitation on the helicopter, although due to other more pragmatic concerns this is not as significant a problem as it may appear (the craft does not do well in modest or high winds, and only has about 12 minutes of battery time so long range flight is effectively infeasible).

By using your iPad as a control, the manufacturing and costs of the quad helicopter have dramatically been reduced. You do not need a dedicated device with unique controls to master – simply load software onto your iPad and you are off and running. You are also able to easily upgrade the controlling software on your device (just like updating an app) as well as update the quad helicopter itself via that same method.

The controls take a little bit of getting used to, although I am sure that they would be more obvious if I had any level of helicopter knowledge. The right control (a dot, actually) makes the drone go up or down or pivot. Pivoting is important because this sets your direction, which also includes the front facing camera. Once you are at the altitude that you want and facing the direction where you want to go, then you use the other control to move forward or backwards (your left hand). The display on the iPad is cool too because you can see what the drone sees as well.

By using the iPad another great benefit is the fact that photos or videos (you choose when to “snap” and when to start recording) are automatically downloaded to your device. There is an option for a USB card on the drone but I don’t know why you’d use that when you can just download the videos and photos to your iPad and then edit and email them off.

The final, coolest feature is that there is a “land / take off” button. Landing and taking off are the two hardest things and will likely result in the greatest number of crashes for a radio controlled plane or helicopter. With the drone, it is a snap, because you just hit “take off” and it rises and gets to about 4-5 feet off the ground and hovers there. The drone will hover if you don’t give it commands, and it uses its internal cameras (I think) to keep a roughly steady position (once again this shouldn’t be used in high winds). In addition, the “land” button can be used whenever the drone is heading the wrong direction and it safely sets it down and you can walk over and pick it up. This is kind of an “abort” command because unless you know what you are doing often the drone will be going where you tell it to go but not where you want it to go.

Here is a link to a video of the drone in flight.

You can take great photos and videos from the drone itself and they are of high quality. It is a lot of fun seeing your house from up above and everyone laughs a lot when you send the drone after them for the first time.

There is a market for spare parts, additional batteries, and a slew of videos of people using their drones as well as the photos and videos taken by those drones. Part of the marketing campaign is a site and challenges between various users (races) and I’m sure that this will be viral since there is so much that you can do with the drone.

As far as privacy concerns go, I don’t know if this model per se is a big challenge because of its relatively small range, limited flight time, and difficulties with high winds, but a more powerful / functional model could obviously range widely and likely autonomously. The technology is clearly here and very powerful and cheap. This model is between $250 – $300, but likely costs more when you buy a spare battery and replacement rotors and other components.

The fact that this device exists and leverages wi-fi, iPads (tablets and phones too), your device storage capabilities and processing power, and all works reliably for under $300, is an amazing technological breakthrough in my opinion. I would recommend that you get one or check it out if you are remotely interested in this sort of thing.