The world weighs on my shoulders, but what am I to do?
You sometimes drive me crazy, but I worry about you
I know it makes no difference to what you’re going through
But I see the tip of the iceberg, and I worry about you …

But wouldn’t it be luxury to fight in a war some time where, when you were surrounded, you could surrender?

– Ernest Hemingway, For Whom the Bell Tolls

Reading through background material on the UN’s recent request for $16.4 billion in humanitarian aid in 2015, I find that the number of displaced people was already at its highest since World War II at the end of 2013, and has risen by several million since then. Nearly all are somewhere inside or on the perimeter of the Muslim world, with Ukraine the only sizeable exception. My sense, in which I am hardly alone, is that we are reliving the mid-1930s, with aggression unchecked and chaos unmitigated by morally exhausted Western institutions. That “low dishonest decade” ended in global war with a per capita death toll around 1 in 40. A proportional event a few years from now would kill 200 million people.

A quarter-century ago, based on their reading of the temperaments of the generations then living, including the Millennials being born at the time, they predicted a fifth instance, which they called the Crisis of 2020. This is not to be taken as an event occurring in 2020 or in any single year, but in the years around 2020 and reaching its climax and resolution within a few years of that date. The Great Depression – World War II Crisis could have similarly been predicted, circa 1910, as the “Crisis of 1940.”

GENERATIONS was blurbed by a collection of personages as variegated as then-Senator Al Gore and then-Cato Institute president Bill Niskanen. I have met and spoken with enough people of contrasting political persuasions who have read it to know that its appeal, and perhaps its ability to give offense, is entirely orthogonal to conventional politics. Note that my belief in the model, however fervent, is not a desire for the Crisis of 2020 to continue to unfold; I would greatly prefer to live quietly. I don’t think I’m going to get to do that for a while, even if I happen to survive, and our own Crisis Era is likely to include, besides plenty of casualties, a degree of societal regimentation far greater than any libertarian, or most conservatives or liberals for that matter, could ever welcome. Heinlein: “You can have peace. Or you can have freedom. Don’t ever count on having both at once.” If I’m right, we won’t have either for several years, starting soon. This is about acknowledging our situation and moving to meet it, not being thankful for having been matched with this hour.

The general theme is that relatively constant stresses in combination with steadily declining crisis-management abilities create ever-greater “negative risk events” (I tend to litter these posts with project-management terminology) until a truly existential struggle is joined. Pressure does not build up, but its containment fails, simply because the generations that survived the previous Crisis Era, thereby acquiring an almost instinctive ability to overcome crises, inexorably depart from the scene. The youngest cohort of the Silent Generation turned 72 last year, and Boomers have, if anything, a propensity to foment crises. “Absalom, Absalom, Absalom!” 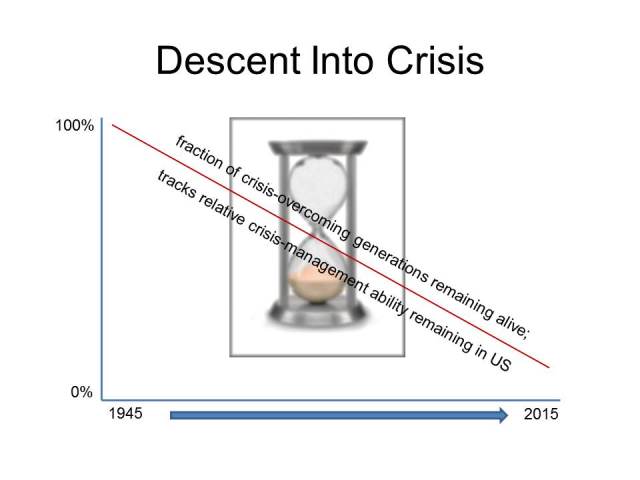 This is not a merely arcadian worldview in which we are endlessly descending from an ideal past, but a description of the crossing of a threshold for the fifth time in three and a half centuries, one that, as in past instances, requires prompt and drastic adaptation. As to our particular crossing, I would nominate non-state WMD acquisition – if not development – and use no longer being successfully prevented or deterred in the near future. The domestic-economic phase of the Crisis of 2020 has been underway since at least 2008; predicting the exact mechanism for starting its international-military phase matters much less than realizing that our ability to prevent geopolitical calamities has steadily atrophied, because the “we” of 2015 is not the “we” of 1985, much less 1945.

As overwhelming as our disadvantages may seem – the foolishness of American baby boomer-generation leadership and the wishful thinking of the American electorate being high on that list – and as long and deadly as I expect the conflict to be, I believe that both civilizational and American survival are likely. Many of the people reading this will lose someone close to them in the next decade. Some of us will not live to see the final victory ourselves. But the America of the late 2020s will be as much improved over what it is now as it became between the middle 1930s and the late 1940s. Like those who saved the West then, whatever generation you belong to, you have a rendezvous with destiny.

31 thoughts on “A Few Cautious Predictions About Our “Crisis Era””