In a previous post I discussed the high probability of there being some sort of major fiscal calamity in Illinois in the next two years. Here I propose how to solve the issues in the state. I realize that the chance of any or all of these solutions to be put into place is near zero without unthinkable changes, but in fact they are all obvious and will likely be part of the ultimate solution.

Consolidate Governmental Entities – Illinois has over 8400 governmental entities, the highest in the USA. These entities need to be drastically curtailed and likely should number in the hundreds, and each should have professional management, strict caps on borrowing capabilities, and an inability to sign up for long term unfunded obligations (pensions, retiree health, etc…) without stringent oversight.

Eliminate Pensions and Defined Benefit Plans and Move to Defined Contribution Plans – Illinois’s pension and benefits woes are myriad and well documented and extend through every city and county due to firefighters and policemen and governmental workers. Regardless of the one time pain, strikes, protests, and society-shaking impacts of these moves, these unfunded obligations are an impossible burden on the state and it must move to a 401k-like plan (similar to what Nebraska did)

Reduce State and Local Employee Compensation Pay by 25% or More – The government faces a simple choice between paying its employees what they think they deserve (ever more) and the government’s obligation to provide services to its citizens at a price that does not drive excessive taxation. This deal is broken and a large part of the burden will have to rest on governmental employees. If they do not like this solution they will be free to find employment in the private sector where it is unlikely that they will be able to match the same package of benefits and compensation. We will know that the model is in balance when the turnover rate of government is equal to that of the private sector.

Outsource 33% or More of Governmental Jobs – There are large opportunities for efficiencies in the governmental sector, through use of the Internet, changes in processes, and injection of competition into areas traditionally done by the government. Even within areas that are generally governmental functions (like the police), a significant portion of the functions such as administration could be done by third-party or online vendors.

Reform Purchasing By Use of Modern Techniques and Focus on Outcomes Not Political Concerns – Our procurement systems in Illinois are riddled with favoritism, opaque decision methods, and a focus on aiding politically connected firms. In addition, payment of vendors is very slow which rules out many smaller and less capitalized vendors. We need to focus on market based outcomes (quality of service, cost reduction, speed to market), and reward vendors with consistent and timely payments rather than focusing on political connections and long term relationships which favor a few incumbents.

Consolidate Debt and Plan and Execute In a Strategic Manner – At some point our debt of various entities needs to be straightened out and managed in a consistent and optimized way. This can only occur when the various entities are under central control and their power to create their own obligations has been eliminated, and would be tied with various structural reforms or one-time haircuts to get the situation in line with our taxing capabilities.

Streamline Our Tax Systems and Make the Results Transparent – Illinois is heavily reliant on our property taxes, although the process is particularly opaque in Chicago because of various TIF incentives that steer development to certain areas and political favorites. We also have punishing cigarette and sin taxes which reduce revenues while encouraging smuggling. Our sales tax is also punitive and among the highest in the nation. One of our few positive elements is the lack of a progressive income tax, which is something that many are continuously attempting to overturn.

Stop Capital Projects and Repair Existing Infrastructure – When the financial crisis hits we will need to defer incremental capital projects (which are very costly and require ongoing support), and attempt to shore up some of our existing infrastructure which is in crisis such as these El Tracks in River North and bridges and roads everywhere in the state. 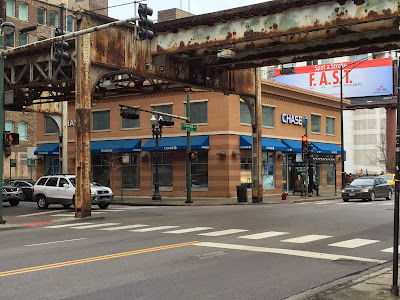 Eliminate Business Barriers and Favoritism to Cronies – A friend of mine who moved here from California was astonished that he had to bring a lawyer to the closing of his house purchase; who could imagine that Speaker of the House Madigan is partner in a legal firm that engages in property tax appeals. Our liquor and beverage empires are also politically connected, as well as our ever continuing subsidies to horse race track owners and similar state subsidized businesses. Our rules and regulations should be transparent and fair and open to competition.

Make Illinois a Right To Work State – Our adjacent states have gone right-to-work and they have seen an uptick in interest in the type of manufacturing work that would be hard pressed to consider Illinois. We need to level the playing field and work to retain our manufacturing base.

Stop Gerrymandering the State – Our state is gerrymandered at the Federal and State level, which is tied to a lack of interest and trust in politicians. As part of the housecleaning a serious default on debt obligations is likely (whether it is official or not it would need to be a restructuring). Elected officials would need to increase transparency and trust among voters, and an important way to do this would be to create logically organized districts so that officials could be accountable to their constituents.

In general none of these types of items would make sense individually because any one of these efforts would require an incredible effort and be fought tooth and nail by those entities that profit from the status quo. In the end, however, some sort of serious financial crisis would cause the state to look at the roots of our over-spending and our lack of competitiveness (growth is an important part of the equation), as well as the lack of trust in institutions by voters, since you’d have to ask for more in terms of funding to tackle the mess that’s accumulated after all these years.

15 thoughts on “How To Fix the State of Illinois”