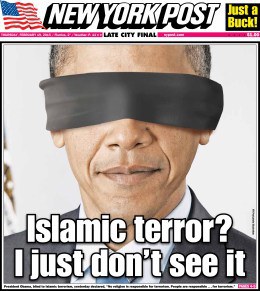 The recent ridiculous antics of Obama and his administration spokesidiots have been been somewhat amusing but still dangerous. Ms Harf is is the object of ridicule around the world.

Marie Harf, the embattled State Department deputy spokeswoman who insisted this week that helping ISIS jihadis find gainful employment was a better strategy than killing them, is not in line for a promotion when her boss moves to the White House on April 1, a State Department official said Thursday.
Harf said Monday night on MSNBC that ‘lack of opportunity for jobs’ in the Middle East should be America’s focus in the war against the ISIS terror army.
She refused to back down Tuesday night on CNN, insisting that the Obama administration should ‘get at the root causes’ of terrorism. ‘It might be too nuanced an argument for some,’ she sniped at her legions of critics.
Those mockworthy moments, a State Department official said Thursday, ‘are going to keep her from the top job.

Well, we are grateful for small favors. Obama shows in his ridiculous “summit” that she was describing his real policy.

A recent piece in the Atlantic does a pretty good job of explaining what they are all about.

The Islamic State, also known as the Islamic State of Iraq and al-Sham (ISIS), follows a distinctive variety of Islam whose beliefs about the path to the Day of Judgment matter to its strategy, and can help the West know its enemy and predict its behavior. Its rise to power is less like the triumph of the Muslim Brotherhood in Egypt (a group whose leaders the Islamic State considers apostates) than like the realization of a dystopian alternate reality in which David Koresh or Jim Jones survived to wield absolute power over not just a few hundred people, but some 8 million.

The entire article is well worth reading.

Today, CNN has a good piece on the nonsense about jobs and economic opportunity.

Kepel researched the 300 Islamist militants who were tried in the wake of the 1981 assassination of Egyptian President Anwar Sadat. Around one in five were professionals such as engineers, a quarter worked as government employees, just under half were artisans or merchants, one in 10 were in the military or police, and only one in 10 were farmers or were unemployed. Of those who were students, around a third were studying in the elite fields of medicine and engineering.

This has been pretty typical of terror leaders since World War II and beyond. The Bolsheviks were middle class, even Stalin who had been a divinity student.

Religious motivation is denied at our own peril as we may think that educated people can’t be stupid enough to believe the medieval theology of Islam.

Virtually every major decision and law promulgated by the Islamic State adheres to what it calls, in its press and pronouncements, and on its billboards, license plates, stationery, and coins, “the Prophetic methodology,” which means following the prophecy and example of Muhammad, in punctilious detail. Muslims can reject the Islamic State; nearly all do. But pretending that it isn’t actually a religious, millenarian group, with theology that must be understood to be combatted, has already led the United States to underestimate it and back foolish schemes to counter it. We’ll need to get acquainted with the Islamic State’s intellectual genealogy if we are to react in a way that will not strengthen it, but instead help it self-immolate in its own excessive zeal.

The book, The Looming Tower

is a first primer on what is going on. It has been out for years and should be a first step in understanding these people.

I am reading In the Shadow of the Sword

by Tom Holland which is about the origins of Islam and has gotten the author into some trouble with fanatics.

Austin Bay has some thoughts about their strategy, which are of value.

Which leads to purpose two. Murdering helpless captives shocks, insults and angers civilized human beings. IS leaders, however, love to shock and insult. To shock and insult means to defy restrictions. In its war against infidels, IS recognizes no restrictions. If this sounds a bit like a 19th-century European anarchist political trope, indeed it is.

The ISIS leadership includes some experienced officers from Saddam’s army. That army was officered by Sunni Muslims and the soldiers were largely Shia. That is why it fell apart so quickly.

IS forces are probing Baghdad. Several IS leaders are Iraqi Sunnis with ties to Saddam Hussein’s regime; they definitely want to seize control of Iraq. Two former Iraqi Army lieutenant colonels hold high positions in the IS military hierarchy. Al-Baghdadi met them when they were imprisoned at the old Camp Bucca detention complex.

IS leaders have goals beyond Iraq. Civilized people may dismiss their goals as sociopathic delusions, but men like al-Baghdadi believe control of Iraq and Libya will position them to seize Egypt (population resources) and Saudi Arabia (dominating energy resources). This regional caliphate then goes global.

Nonsense about jobs and denying the religious ideology just adds danger. There are a few things here to read this weekend.

3 thoughts on “Some Sanity About Terrorism, from of all places, CNN”