I came across an excellent long post at Bookworm this morning. I have been very aware of the growing presence of illegal aliens in California for the past 40 years. Not far from my home you can see some of it as Hispanic men gather at street corners looking for day labor. 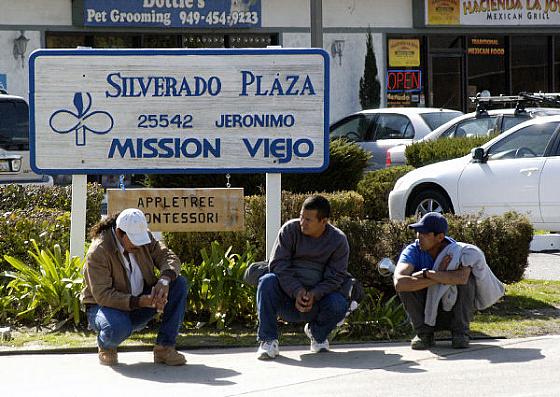 Two such corners are at Jeronimo and Los Alisos in Mission Viejo. Another is a half mile away at a U-Haul yard where people rent trucks and trailers. Every morning you will see 50 to 60 men standing on the corner and running over to any car that seems to be slowing down or stopping.

Anyway, here are a few reflections on what is happening.

The communists’ big moment came in 1995 when no one was looking. That was the year that the Democratic Socialists of America, a communist group, put one of their own — John Sweeney — in as head of the AFL-CIO. Overnight, the AFL-CIO, an organization that was once ferociously anti-communist and that opposed amnesty because it would hurt working Americans, turned into a pro-communist, pro-amnesty group.

More than that, through the AFL-CIO, communists suddenly owned Congress. After all, unions (headed by the SEIU, which outspends the next two donor organizations which are also Leftist) are the largest contributors to Democrat politicians.

Ok, Ok I know that communists are an old story. Still, what we see in this country is Socialism gaining adherents among the young and poorly educated and among the rich who consider themselves immune to its ill effects.

Over the past 20 years, the unions’ biggest push has been for amnesty, something that, as I noted, the old unions viewed with revulsion as a job destroyer. The new guard, however, understands that amnesty is the pathway to a permanent Democrat majority. Keep in mind the fact that Mitt lost the presidency by only 2.5 million votes, while amnesty promises 8 million or more permanent Democrat votes. (And yes, while Hispanic family values ought to make them side with conservatives, the fact is that they overwhelmingly vote for the same Democrats that slice and dice them by race and create financial incentives that keep them locked in the ghetto.)

Sadly, when it comes to amnesty, the communists and Democrats don’t act alone. They get way too much help from the Chamber of Commerce, which owns Boehner and Co.

I also agree here. A recent story illustrates this issue. Southern California Edison Company, the largest public utility in the area, is laying off US tech workers to hire foreign workers on H1B visas.

To make this story even worse.

Information technology workers at Southern California Edison (SCE) are being laid off and replaced by workers from India. Some employees are training their H-1B visa holding replacements, and many have already lost their jobs.

The employees are upset and say they can’t understand how H-1B guest workers can be used to replace them.

The IT organization’s “transition effort” is expected to result in about 400 layoffs, with “another 100 or so employees leaving voluntarily,” SCE said in a statement. The “transition,” which began in August, will be completed by the end of March, the company said.

“They are bringing in people with a couple of years’ experience to replace us and then we have to train them,” said one longtime IT worker. “It’s demoralizing and in a way I kind of felt betrayed by the company.”

So much for STEM degrees being the key to reliable jobs.

The H-1B program “was supposed to be for projects and jobs that American workers could not fill,” this worker said. “But we’re doing our job. It’s not like they are bringing in these guys for new positions that nobody can fill.

“Not one of these jobs being filled by India was a job that an Edison employee wasn’t already performing,” he said.

Oh well, this is an example of the “Animal House” principle.

Flounder, you can’t spend your whole life worrying about your mistakes! You fucked up… you trusted us! Hey, make the best of it!

The rest of the Bookworm post goes into the role of illegal immigration and why it is being pushed by Democrats.

Thus, in a marvel of shortsightedness, the Chamber of Commerce types see these new immigrants as a source of cheap labor that maximizes profits, without understanding that they’re also the socialist wedge that will destroy capitalism. As Lenin presciently said, “The Capitalists will sell us the rope with which we will hang them.”

Lest you think that Trevor is connecting imaginary dots with invisible lines, remember the treasure troves (of communist party memoirs) in the library. he’s got first person data to support every one of his allegations.

Thanks to his research, Trevor can name the five most powerful forces in the amnesty movement. The godfather of the movement was the late Humberto Noé “Bert” Corona , a Stalinist and Democrat who started the amnesty movement in Los Angeles in the 1950s. He was also the one who brought the wealth and moral suasion of the Catholic Church — which was already being moved Left by the Liberation theology movement — to back amnesty. Corona’s goal wasn’t to save souls, though. He wanted to and did grow a permanent Democrat voting base in California.

His history is interesting. Harry Bridges, chief of the ILWU and a major figure within the CIO, offered Corona a position as a CIO organizer. Harry Bridges was openly a communist and In the 1990s Bridges was revealed to have been a member of the Communist Party USA in the 1930s.

OK. We know that relationship. What else ?

As a founder and leader of Hermandad Mexicana Nacional he played an important role in the efforts to gain an amnesty program for undocumented workers in the Immigration Reform and Control act 1986. IRCA.

Also referred to as Amnesty.

The next important person in the amnesty movement was Antonio Ramón Villaraigosa, the former mayor of Los Angeles, and the one who turned L.A. into a sanctuary city that no longer worked to deport illegal aliens (which was still something of a novel idea as little as a decade ago). Approximately 1/10 of all Los Angeles residents are now illegal aliens and beneficiaries of amnesty. (I’ve also been told by a reliable source that, thanks to this influx, a significant number of American-born L.A. Unified School District teachers test positive for TB, although they’re not actively ill.)

We know about Villaraigosa, whose political career went into eclipse after his lackluster term as Mayor.

The third person behind amnesty is Gilbert Anthony Cedillo, the major player in California’s Democrat Senate. It was Cedillo who got the DREAM Act passed in California. It put California taxpayers on the hook for funding college education for illegal aliens, all while squeezing students in America legally out of the education system.

California also boasts the fourth amnesty powerhouse, Marie Elena Durazo, Executive Secretary and Treasurer of the Los Angeles County AFL-CIO. She is the person behind “get out the vote” efforts for Latinos — legal or illegal.

These four people have made sure that California, which brings the largest number of electoral votes to the table in presidential elections, will be solid blue for the indefinite future.

The only chance that California might rejoin the rational world is if the state goes bankrupt. Silicone Valley and the tech industry seems able to stave off collapse of state finances so far. California is heavily dependent on taxes paid by the high incomes of Silicone Vally. Rumors of a tech bubble are so far only that, rumors.

It’s hard not to think about it as we ease into 2015, given that signs of froth have been building in tech since ever since the end of 2010, when acquisition prices and private company valuations started to soar. After four years of steep gains – of companies such as Salesforce.com hovering near all-time highs without ever turning a profit, of the Nasdaq creeping up on 5000 and at least one private company nearing a $25 billion (or more) valuation – shouldn’t something give?

All cycles being equal, of course we’ll see prices come down, eventually. But I don’t think it will happen for a few more quarters yet.

It’s clear that there’s money to be made in Silicon Valley right now, and no one wants the boom to end.

The effervescence that dominated the final few years of both of the previous market booms was largely due to low interest rates, which, perversely, pushed piles of cash from around the globe into asset classes yielding the best return. The lower the rates, the loftier the inflation. That’s also where we find ourselves today.

If that ever happens and it might soon, California will feel real pain. In the meantime….

Medina is one of those working to get Hispanics the vote in Texas.

If Texas goes as blue as California, thanks to all those reliable Democrat votes, Democrats will have a permanent lock on the electoral college and, through that, a lock on the White House. Moreover, that permanent lock will come after Obama has set the precedent for unilateral executive action without regard for Congressional powers.

Incidentally, the union chiefs are open about their goals, although most of the rank and file are ignorant of this. Contrary to what ordinary union members assume, which is that their unions are looking out for them, the union movement, having been taken over by hard-core socialists, has only one goal: a permanent, hard-Left Democrat political majority. Three years ago, Medina was caught on tape telling supporters that the amnesty movement is the top priority of the Progressive movement. Note that the union’s priority isn’t the American worker, who’s getting screwed by amnesty.

The rest, as they say, is worth reading. What worries me is the role of Republicans in this building crisis.

History, however, offers a useful precedent for conservatives in America. In 1976, the mandarins of the GOP looked at Ronald Reagan, an up-and-coming California politician, and decided he was toxic. Too extreme, they said. We need someone moderate, someone like Gerald Ford (a good man, but a lousy conservative politician). And so it was that Jimmy Carter became president — or, as Trevor said, Carter became the second-worst president in American history.

Reagan, however, didn’t give up, nor did his supporters. Rather than abandoning the GOP, which has a very useful infrastructure, conservatives took it over, just as the Leftists have taken over Truman’s and Kennedy’s Democrat Party. By 1980, the man who was considered so toxic the GOP wouldn’t touch him won 48 states.

Can this happen again ? I thought Romney was the last chance in 2012. Maybe I’m too pessimistic.

17 thoughts on “Amnesty and our Future.”