Last month, I posted some old photos of Chicago in the 1940s. I grew up in a neighborhood that has since gone badly downhill in spite of a lot of positive features that should have kept it livable. It is South Shore and here is the previous post. We went back for a visit this week and just returned home last night. I posted some more photos of the old neighborhood Here.

We even revisited some spots from my post about a week in Michigan from two years ago. 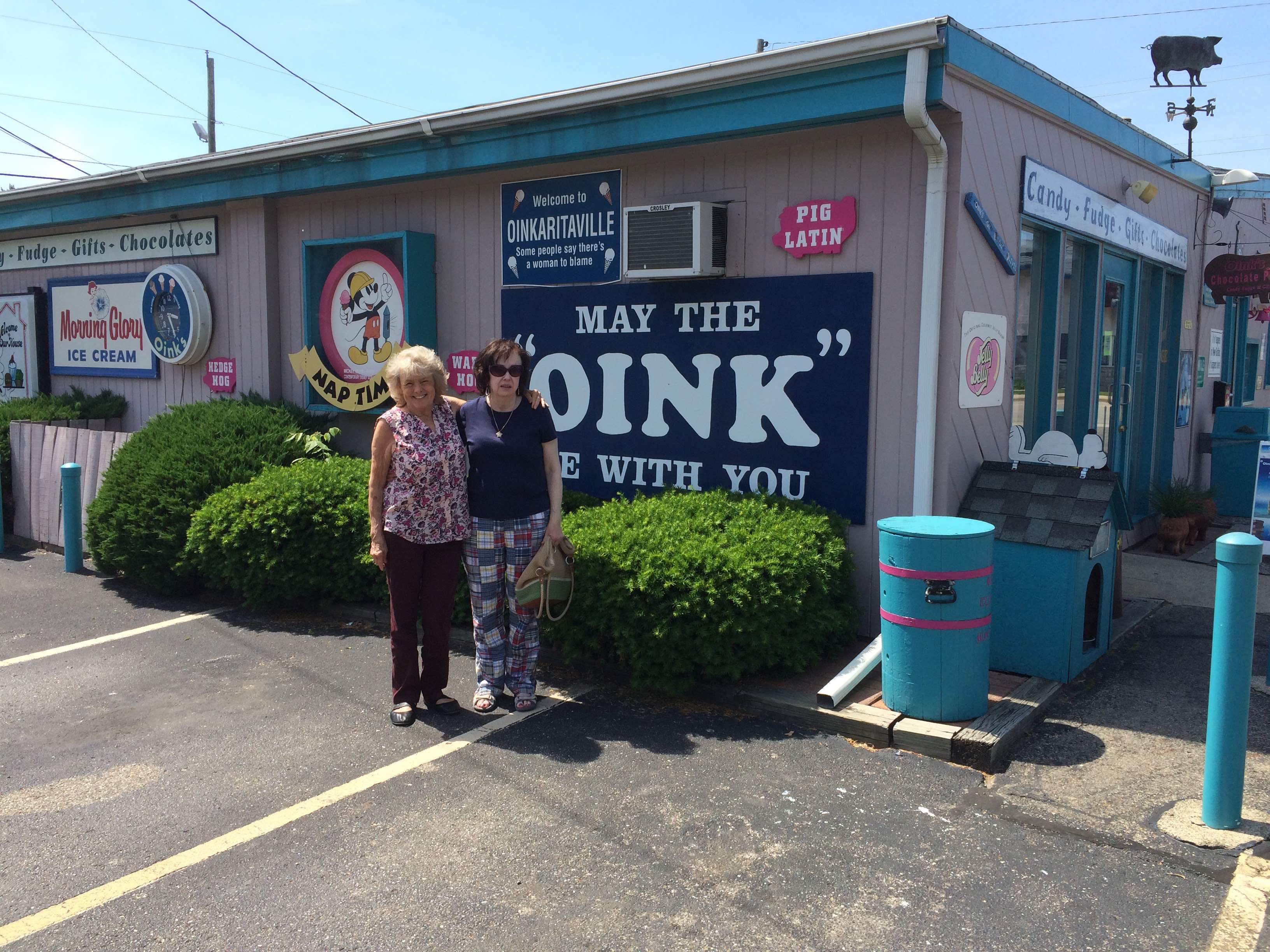 This is the famous (to those in the know) Oink’s ice cream parlor in New Buffalo Michigan. That is my wife and my sister having just partaken of the product. We had lunch at another famous spot, Redamak’s hamburger place in New Buffalo. I was going to add a link but they have a really annoying autoplay music track. That restaurant began in 1947 and the Grand Beach area is the Chicago Irish vacation spot since the 1920s. Redamak’s is only open from April to October and is jammed all summer. We were there on a weekday in May but it was full. The owners go to Florida for the winter.

Chicago seems to be circling the drain financially although the north “Gold Coast” area is thriving. My niece lives on the north side and works at Rush Medical Center as an OR nurse on the liver transplant team. We went up to see her new baby. She has a sideline as a rock band member with her husband. They travel all over to play including England a couple of years ago. She could have gone to medical school as she had excellent grades and a couple of degrees including one in molecular biology but she is quite content with her two careers.

We visited family and drove down to the Dwight area where my father’s family first arrived from New York in the 1860s. My mother’s family arrived from Canada and New Jersey about the same time. Illinois was booming after the Illinois and Michigan Canal opened in 1848. The terminus at Peru-LaSalle Illinois may have brought my great grandfather from New York where family legend has it that he had worked as a mule skinner on the Erie Canal that opened in 1825, ten years before he was born. He and my great grandmother were from upstate New York near the St Lawrence River where their parents arrived from Ireland and settled.

My great grandfather worked (so the story goes) as a constable in La Salle before going back to New York to marry my great grandmother. When he left, he made himself a glass cane in the glass factory where he also worked. I have that glass cane. I had forgotten this bit of the Wiki entry:

Most of the canal work was done by Irish immigrants who previously worked on the Erie Canal. The work was considered dangerous and many workers died, although no official records exist to indicate how many. The Irish immigrants who toiled to build the canal were often derided as a sub-class and were treated very poorly by other citizens of the city.

When they came back to Illinois with their oldest child, one of nine sons they had, they bought or homesteaded a farm near Odell Illinois in Livingston County. I know my grandmother’s father homesteaded his farm near the same village because, when I was a boy, my grandfather told the tenant framer who farmed the place to plow up the pasture which had never been plowed and was the original sod. I’m sure some preservation society would be after him now but the following summer the corn was 12 feet high. 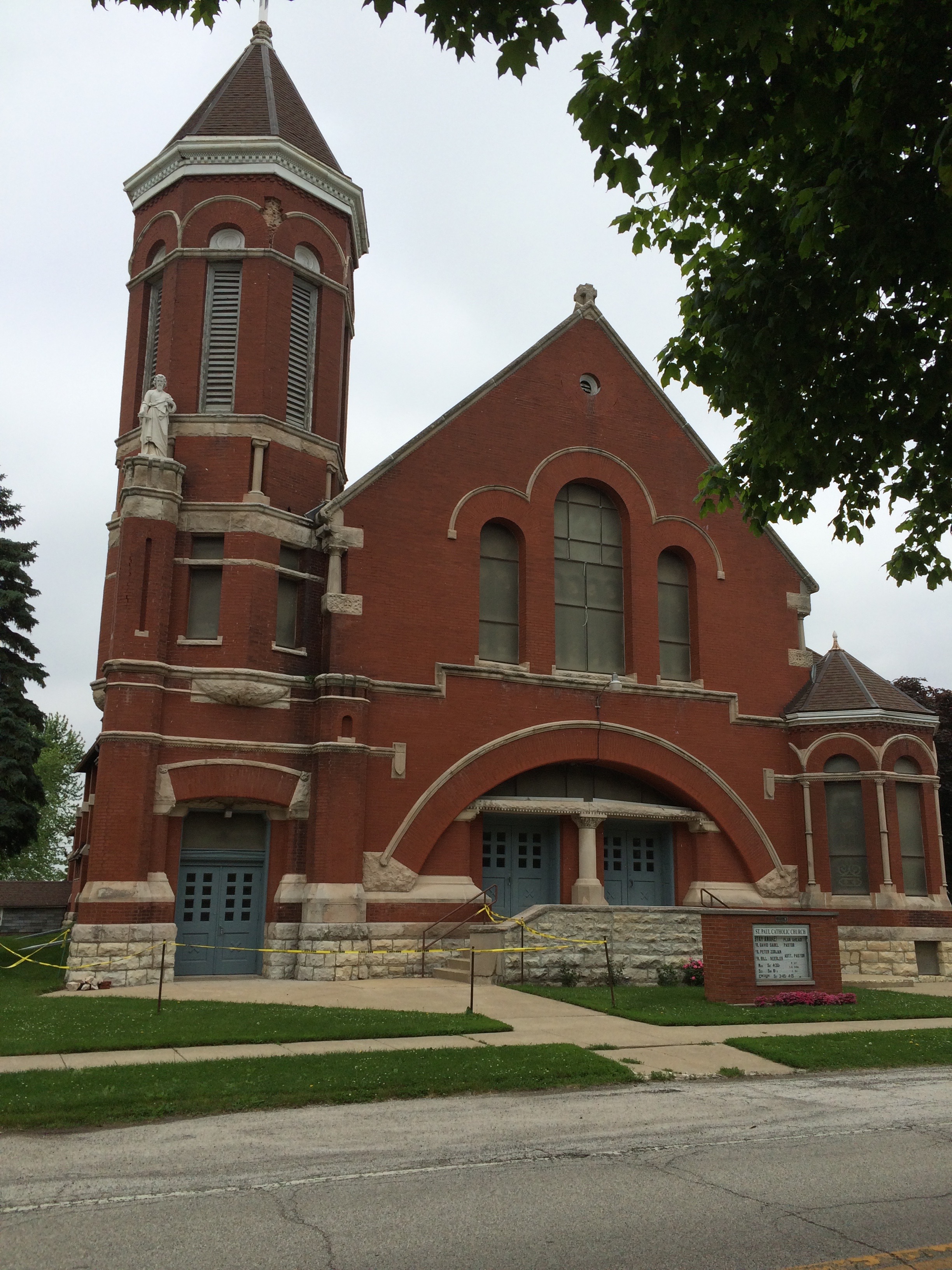 This church in Odell has stained glass windows. The first one to the left was donated by “Mr and Mrs Michael Kennedy.” The first to the right was donated by “Mrs and Mrs John Ferguson,” my grandmother’s parents. Irish farmers, many of them illiterate, did quite well in Illinois in the 19th century. The church was locked this week so I could not get photos of the windows.

My mother’s family were in Chicago where she was born in 1898. Her mother had come from Canada to live in Aurora, Illinois and there she lived in a rooming house and met the brother of the woman who owned it. He was a railroad engineer and became my grandfather. He died of pneumonia in 1899 when she was an infant, leaving her mother to raise the family (including two older siblings) by herself. There were no social safety nets in those days but they made it and my mother lived in three centuries, dying in August 2001 at the age of 102.

Sorry to inflict these family stories on you all but they seem to me to say something about where the country was on track and why we seem to be losing our way these days.

3 thoughts on “Back to the old neighborhood.”