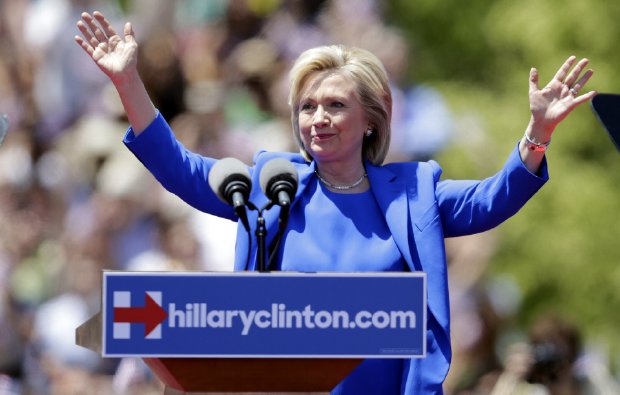 Today, an interesting column was published suggesting that, if the Republicans don’t beat Hillary, they should just disband the party.

I think this makes some sense. We have an attractive group of candidates and some valid issues, including the economy and foreign policy. She is a terrible candidate.

Add this to the mounting scandals, polls showing a lack of trust for her, the historical difficulty of political parties winning three presidential elections in a row, and the deep bench of fresh-faced Republican options, and the GOP should be in prime position to win the next election.

But the next election will test whether demographic headwinds are too much for Republicans to overcome.

Maybe the country is just not serious about issues anymore.

She brought up Republican skepticism on climate change and opposition to abortion, saying “they shame and blame women rather than respect our right to make our own reproductive health decisions.”

She blasted Republicans for supporting policies that would increase deportation of immigrants and for “turn[ing] their backs on gay people who love each other.” She lashed out at Republican support for voter ID laws. “I’ll fight back against Republican efforts to disempower and disenfranchise young people, poor people, people with disabilities and people of color,” she said. And she argued that, “Fundamentally, [Republicans] reject what it takes to build an inclusive economy. It takes an inclusive society.”

Some of us read history and can recall that the Whig Party dissolved over the issue of slavery. The history of the Whig Party was of a party devoted to economic progress. It was also a party of opposition. Lincoln, when a Whig, opposed the Mexican War at some cost to himself.

The work of the Whigs was, as (James G.) Blaine admitted, negative and restraining rather than constructive. Still, “if their work cannot be traced in the National statute books as prominently as that of their opponents, they will be credited by the discriminating reader of our political annals as the English of to-day credit Charles James Fox and his Whig associates—for the many evils they prevented.” If that is true, then we have not had very much in the way of “impartial” histories of American politics since Blaine’s day.

Also true. Particularly Coolidge and Harding were slandered by the Progressives of the New Deal and its apologists.

Part of the success of Schlesinger’s casting of antebellum America as Jacksonian lay in Schlesinger’s identification of Andrew Jackson and Jackson’s Democratic party with Franklin Delano Roosevelt and the New Deal. To this day, one comes away from The Age of Jackson with the clear sense that Jackson and the Jacksonians embodied democracy and championed the interests of the “common man,” while the Whigs were the voice of selfish elite interests, and looked like nothing so much as forecasts of Herbert Hoover and Robert Taft.

The Republicans have had hardly better treatment by the news media of today than the Whigs by the Progressives.

[T]he question arose whether the Whig complaint against Jacksonian Democracy might have had more substance to it than it had seemed.

That question rose first in one of the genuinely pathbreaking works of American political history, Daniel Walker Howe’s The Political Culture of the American Whigs (1979).

The Whigs sound more like Republicans today than those of the 19th century.

Howe reintroduced the Whigs, not as Eastern elitists bent upon wickedly obstructing the righteous class-leveling justice of Jackson/Roosevelt, but as the “sober, industrious, thrifty people,” as the party of the American bourgeoisie, attracting the economic loyalty of small businesses and small commercial producers, and enlisting the political loyalty of those who aspired to transformation. Transformation was the key concept. It made the Whigs optimistic and serious all at once, since it embraced both the religious moralists and moral philosophers of the established denominations and colleges who preached personal and moral transformation as well as the upwardly mobile professionals who found in the dynamic world of international commerce the opportunity to escape from rural isolation and agrarian drudgery.

Sound familiar ? The Whigs were the party of railroads and canals that linked commerce across the country. Their fall from power, and from grace, occurred as the culture broke apart in the colossal struggle with slavery.

it was the Whigs who advocated an expansive federal government—but it was a government that would seek to promote a general liberal, middle-class national welfare, promoting norms of Protestant morality and underwriting the expansion of industrial capitalism by means of government-funded transportation projects (to connect people and markets), high protective tariffs for American manufacturing, and a national banking system to regulate and standardize the American economy.

The question today is whether the Republican Party can cope with the rapid debasement of the culture with gay marriage and bizarre aberrations like transexual exhibitionism.

The Democrats seem to be succeeding with their new emphasis on the strange and the bizarre.

Jackson’s Democrats came off as frightened, snarling, and small-mindedly anticapitalist in mentality. Jacksonianism glorified agriculture and defined wealth as landholding, and its interest in the “common man” was limited to building defenses around an agrarian stasis—simple subsistence farming, trade in kind, and no taxes, banks, or corporations—that would never be threatened by the demons of competition or the fluctuations of markets. Linked to this preoccupation with stasis and personal independence was the Jacksonians’ resistance to public declarations of morality.

Andrew Jackson fought a duel with a man who criticized his wife, Rachel, who had some controversy regarding her previous marriage.

During the presidential election campaign of 1828, supporters of John Quincy Adams, Jackson’s opponent, accused his wife of being a bigamist, among other things.

Here is Holt’s story of the Whigs, in as compressed a fashion as possible: Rather than being a branch out of the root of Federalism, the Whigs evolved like the Jacksonians from the original Jeffersonian Republicans who triumphed in the “Revolution of 1800.” They were originally an opposition faction to Andrew Jackson in the 1820s, but they detached themselves as a separate organization in 1834 under the leadership of Jackson’s nemesis, Henry Clay of Kentucky, and took the name Whig to underscore their opposition to Jackson’s high-handed near-dictatorship in the presidency. They cast themselves first as republican antimilitarists.

The modern Republican Party has adopted national security as a core issue but it was not always so. Democrats dominated military subjects from 1912 until Lyndon Johnson when the party revolted over the Vietnam War. Republicans fought the Civil War over slavery, the basic reason of the party, but the rest of the century was one of peace and only Theodore Roosevelt, a figure of the early Progressive Movement, was interested in war. His career really took wing with the Spanish-American War, which was not a “war of necessity” shall we say.

The 1837 economic panic also set in place the two principal mechanisms for Whig electoral success, which were (a) to concentrate public attention on the failings of Democratic politics and (b) to scoop up the largest percentage of new voters in every presidential cycle. It is a significant point in Holt’s description of antebellum parties that American voters, once recruited to a party, rarely switched allegiances over time. What was critical in each presidential cycle, then, was to energize the existing Whig voter base by throwing their policy distinctives into sharp contrast to the Democrats’ and by organizing new voters.

Can the Republicans, or a succeeding party, interest new voters ? The welfare state did not exist prior to the New Deal and this has warped American politics in new and unprecedented ways.

[W]henever it made the mistake of relying on charming personalities to head tickets or making generous accommodations with the Democrats on major issues [it lost ground]. But keeping such focus steady was an ideological problem for Whigs. They prided themselves on being a coalition of independent thinkers, unlike (in their imagination) the disciplined faithful of the Democrats, and they did not hesitate to turn on each other with divisive and disheartening abandon. Linked to that, the Whigs valorized the image of themselves as statesmen rather than (like their opposite numbers) party hacks who loved politics only for the power political office conferred.

The similarity is striking. There are differences, of course,. The issues of the 1850s were not the same as they are now but there is a theme to be kept in mind.

What finished the Whigs was their failures, not over national policy questions, but in the state and congressional elections in 1854 and 1855, where the new parties could get the most ready purchase on the electorate. No longer did Whig voters, galvanized by Democratic awfulness, take their votes to Whig candidates to express their disgust; they could go to the Know-Nothings, to the Free-Soilers, the Republicans, and so on.

Third parties are no solution to the problem of the Republicans. I think the Tea Party must capture the party mechanisms and oust the representatives of The Ruling Class. If that does not occur peacefully, it may occur with violence.

22 thoughts on “Is the Republican Party Worthwhile ?”