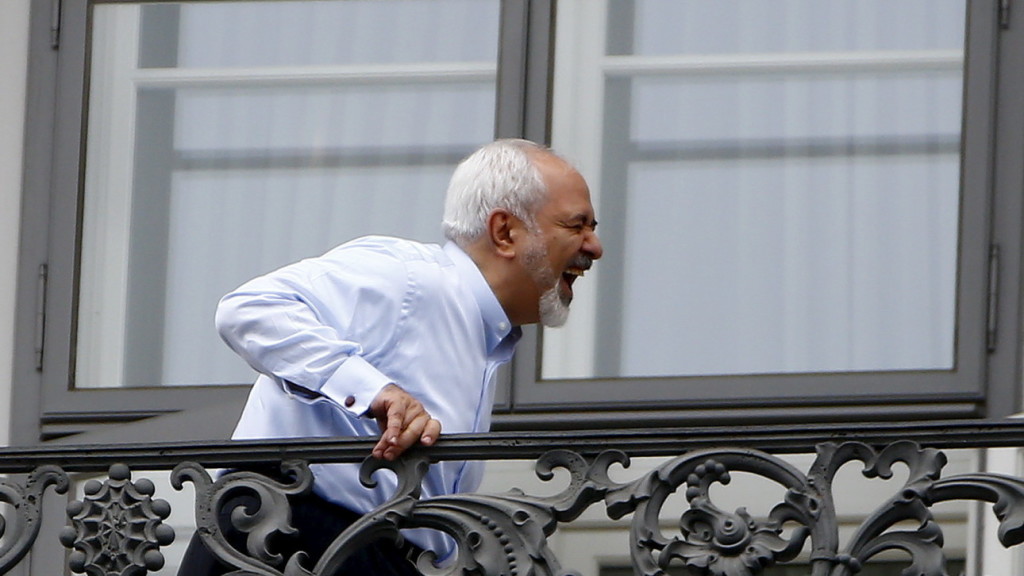 Why is this man laughing ?

UPDATE: John Kerry is now threatening Israel if Congress votes against the deal.

“I fear that what could happen is if Congress were to overturn it, our friends Israel could actually wind up being more isolated and more blamed,” Kerry said.

A good column today by David Gelernter makes a strong case that Obama will be remembered for what he is doing with Iran.

Obama will be remembered ultimately for the Iran treaty, as Johnson is remembered for Vietnam. Like Johnson, Obama is wrapped in a warm blanket of advisers who flatter his earnest, high-school views of world politics. Like Johnson, he lives in his own delusional world in which he’s commander-in-chief not merely of the military but of the whole blessed nation. Like Johnson, he has been destroyed by the arrogance of power; and his blindness has endangered America. Unlike Johnson, he was never big enough for the job in the first place.

His comparison with Lyndon Johnson is excellent. I read HR McMaster’s “Dereliction of Duty,”

and the resemblance to Obama’s policies is astonishing. I recently read another book that points out the consequences of Obama’s decision to abandon Iraq. It is written by a young British woman named Emma Sky and is called “The Unraveling.”

The future is still to be written but we see a few hints. The Iranians are already celebrating and by “Iranians” I do not mean the oppressed citizens of that sad country. They are passengers on a runaway train driven by lunatics. We have now given those lunatics the keys to the atomic bomb.

Turkey has finally entered in force into the U.S.-led fight against the Islamic State group, but the move also has exposed the contradictions and confusion at the heart of U.S. policy, with the Obama administration struggling Monday to balance its promises to warring allies in the region and to prevent a deeper U.S. ground force engagement in the fight.

As NATO ambassadors prepared to gather Tuesday for only the fifth emergency session in the alliance’s 66-year history to discuss the crisis, the Pentagon denied that it was setting up a no-fly zone over war-torn Syria while the State Department faced sharp questions over the extent to which President Obama was abandoning America’s Kurdish allies in its haste to enlist Ankara in the fight against the Islamic State.

On one hand, U.S. officials praised the expanding Turkish military role against the extremist group, also known as ISIS and ISIL, which is based in neighboring Syria and Iraq. But on the other, they acknowledged how complicated the development is amid concerns that Turkey is using its campaign as a pretext to crush Kurdish militants whom Washington has relied upon as the go-to ground forces in northern Syria and Iraq.

Such concerns were highlighted Monday as reports swirled about Turkish fighter jets targeting not just Islamic State-controlled territory in Syria, but also positions held by the Kurdish Kurdistan Workers’ Party, or PKK — an ultra-leftist, Kurdish nationalist outfit that has waged an insurgency for decades in Turkey and maintains bases in remote parts of northern Iraq.

Obama’s black thumb in foreign policy, in which every initiative results in defeat, is still in evidence. There is another good column today by Leon Wieseltier who is the former editor of The New Republic. He doesn’t like the deal.

Rhodes has, perhaps inadvertently, exposed the president’s premises more clearly than the president likes to do. The rut of history: It is a phrase worth pondering. It expresses a deep scorn for the past, a zeal for newness and rupture, an arrogance about old struggles and old accomplishments, a hastiness with inherited precedents and circumstances, a superstition about the magical powers of the present. It expresses also a generational view of history, which, like the view of history in terms of decades and centuries, is one of the shallowest views of all.

Predictably, the Atlantic readers don’t agree and accuse him, of course, of being an Israel loving Jew.

The annoying thing for me is when certain pro-Israel commentators pretend they know better than the US government, or try to prescribe or influence US foreign policy by labelling the current administrations as “naive.”

Does the fact that every US ally in the Middle East, Arab and Jew, opposes this deal mean anything ? No. Of course not to the brilliant left. They know better.