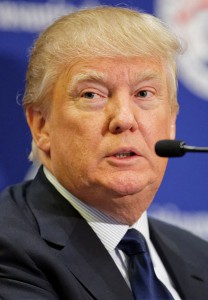 A friend sent an essay by the prolific IR scholar, Professor Angelo Codevilla that had been posted at Powerline Blog.  It was good.

For the unfamiliar, Codevilla often writes on national security and intelligence matters and some readers may be familiar with his (with Paul Seabury) book,  War: Ends and Means

; but in recent years Codevilla has, like Walter Russell Mead and a number

, turned his attention to the shoddy performance, ethical deficiencies and arrogant demands of the new American “ruling class”, writing a biting critique

of their “meritocratic regime”.

In his essay for Powerline, Codevilla turns his attention to the political phenomenon of the improbable GOP presidential front runner, billionaire and reality TV star, Donald Trump.  Unsurprisingly, Dr. Codevilla is not a huge fan of the bombastic Mr. Trump, but his analysis of why Trump has captured the moment so easily has some astute insights about the decaying state of our political system and the seething anger of the electorate:

“In the land of the blind,” so goes the saying, “the one-eyed man is king.” Donald Trump leapt atop other contenders for the Republican presidential nomination when he acted on the primordial fact in American public life today, from which most of the others hide their eyes, namely: most Americans distrust, fear, are sick and tired of, the elected, appointed, and bureaucratic officials who rule over us, as well as their cronies in the corporate, media, and academic world. Trump’s attraction lies less in his words’ grace or even precision than in the extent to which Americans are searching for someone, anyone, to lead against this ruling class, that is making America less prosperous, less free, and more dangerous.

Trump’s rise reminds this class’s members that they sit atop a rumbling volcano of rejection. Republicans and Democrats hope to exorcise its explosion by telling the public that Trump’s remarks on immigration and on the character of fellow member John McCain (without bothering to try showing that he errs on substance), place him outside the boundaries of their polite society. Thus do they throw Br’er Rabbit into the proverbial briar patch. Now what? The continued rise in Trump’s poll numbers reminds all that Ross Perot – in an era that was far more tolerant of the Establishment than is ours – outdistanced both Bush 41 and Bill Clinton before self-destructing, just by speaking ill of both parties before he self destructed

Trump’s barest hints about what he opposes (never mind proposes) regarding just a few items on the public agenda have had such effect because they accord with what the public has already concluded about them. For example ,Trump remarked, off the cuff, that “Mexico does not send us its best.” The public had long since decided that our ruling class’s handling of immigration (not just from Mexico) has done us harm. The ruling class – officials, corporations, etc.- booed with generalities but did not try to argue that they had improved America by their handling of immigration. The more they would argue that, the more they would lose. At least if someone more able than Trump were leading against them.

….The point here is simple: our ruling class has succeeded in ruling not by reason or persuasion, never mind integrity, but by occupying society’s commanding heights, by imposing itself and its ever-changing appetites on the rest of us. It has coopted or intimidated potential opponents by denying the legitimacy of opposition. Donald Trump, haplessness and clownishness notwithstanding, has shown how easily this regime may be threatened just by refusing to be intimidated.

Codevilla is right. He may even be understating the nature of the problem, as remarkable as that may seem.

Our bipartisan ruling elite have, in the short space of fifteen years, managed to: lose two wars; collapse at least three states into permanent anarchy; turn Russia into an enemy again; suffer the greatest counterintelligence failures in history; and nearly melt down the entire global economy and vastly enrich themselves while presiding over the greatest loss of household wealth for ordinary Americans in history, save for the Great Depression. If that is not a level of incompetence that should disqualify them from public office forever, I’m not sure what would.

Despite this track record of utter failure and brazen venality, our elite have managed to remain firmly in the saddle. Why is this? In normal countries they typically have revolutions and coups over far less, but our leaders of both parties managed to cruise from disasters to debacles to win re-election, often by substantial margins.

One reason may be that the elite, broadly speaking, have managed to restore a substantial degree of control over the information the general public consumes, that they had briefly lost  in the early 2000s and subsequently narrowed and shape the terms of “acceptable” political debate in American society more than ever before.

Once upon a time, the mass media ecology was relatively simple and politically reflected what historian Arthur Schlesinger, Jr. termed “the vital center” of Cold War liberalism.  The New York Times editorial page set the general line for informed opinion and most regional and local papers dutifully fell in line, with the Washington Post, TIME, Newsweek, LIFE and US News & World Report generally critiquing whatever debate the Times had begun in greater depth. The three networks, ABC, NBC and CBS, by contrast simplified and reinforced these narratives with the immediacy and power of television. The “Fairness Doctrine” effectively made the system an elite monopoly by freezing out dissenting opinions from the Left or Right from radio or television broadcast. Cold War liberalism was de facto defined as a politically neutral position not requiring “equal time”. It also represented shared values between most journalists and editors and the American leaders upon whom they reported.

This center began to lose its vitality when liberalism itself became divided over the Vietnam War between hawks and doves and support for various counterculture and cultural liberation movements; the media landscape began to shift and diversify after the Reagan administration terminated the Fairness Doctrine, and with the rise of cable news and talk radio. The era of wailing by the gatekeepers really commenced though with the rise of the blogosphere and the early days of social media, which contributed to and coincided with the implosion of the newspaper publishing industry as ad revenue tanked. For a while, the Internet meant that the elite lost control of the conversation, carefully constructed media scams were outed, scandals were discovered and online tsunamis of anger came down on the once high and mighty.

Elite control over discourse has been reestablished to a degree, not as a monopoly but as a loose hegemony based on the principles of Co-option, Coordination and Coercion.

The media elite are now fully integrated into the political and economic elite, intermarrying with them, sending their kids to the same prep schools, Presidents hiring spouses and siblings of network executives and political aides becoming faux journalists. It’s as if James Reston’s brother or Walter Cronkite’s wife had gone to work for Richard Nixon and their kids to school with John F. Kennedy, Jr.  The journalists and editors covertly coordinate news campaigns with each other, politicians, the White House, parties and advocates of causes that they support and when this fails to persuade, the elite like to intimidate.  From abusing the powers of government to harass political opponents to whipping up tribal partisan mobs on social media to furiously abuse or dox some hapless private citizen, perhaps trying to ruin their livelihood for daring to express unwelcome of opinions on subjects the elite find distasteful.

And the list of proscribed beliefs and topics grows increasingly long. The following is a partial list of topics or views generally not supposed to be mentioned by candidates, much less debated by the national standards of American politics and mainstream media:

Muslim immigrant radicalization and participation in terrorism here and in Europe

Anti-semitism on the Left

Foreign money in our political process and elections

Disparities in sentencing broken down by race, especially  harsh sentences for young Black males convicted of non-violent or minor offenses

That Federal monetary, fiscal and trade policies are intended by design to harm the interests of the American middle-class to the benefit of the very wealthy, large corporations and foreigners

Immigration, esp. illegal immigration or that the  Immigration Act of 1965 was intended to change national demographics and drive down wages of skilled professionals and unskilled workers.

Systematically tilting the scales against admitting the children of middle class and working class white and Asian-Americans to elite, “gateway” universities

Erosion of Rule of Law  (including the following)

To do well in the first Republican debate, Donald Trump need only show up and select a few of the more emotionally charged themes and throw them like bombs at the other GOP hopefuls on live television who will scatter but be unable to escape the collateral damage. Trump won’t need a plan or a policy or even a reasoned argument because his opponents have no way to talk sensibly about touchy subjects on the minds of millions of voters that their financial backers and the media don’t want them to even acknowledge. Harder still if Trump is getting laugh lines in at their expense. All of Trump’s vainglorious posturing like a professional wrestling heel aside, the man is absolutely at home in the television medium and comfortable in his own skin (to say nothing of his hair).

A real quandary. Attacking Trump personally, calling him names, ganging up on him or echoing liberal media criticisms will only boost his poll numbers with the GOP base and energize his clown car crash of a presidential campaign to new heights. Having nothing to lose himself with his self-parodying run, no need of campaign donors, Trump cannot be controlled and in a live format could drag down any other candidate with him. Or the Republican Party.

Trump would be an absolutely terrible president – its not even clear that he is serious about wanting the job – but as a candidate he is a walking, talking, club for Joe Sixpack to bludgeon an overweening, corrupt and increasingly authoritarian bipartisan elite.

The beating though is richly deserved and long overdue.

15 thoughts on “Elite Failure and Populist Trump It”