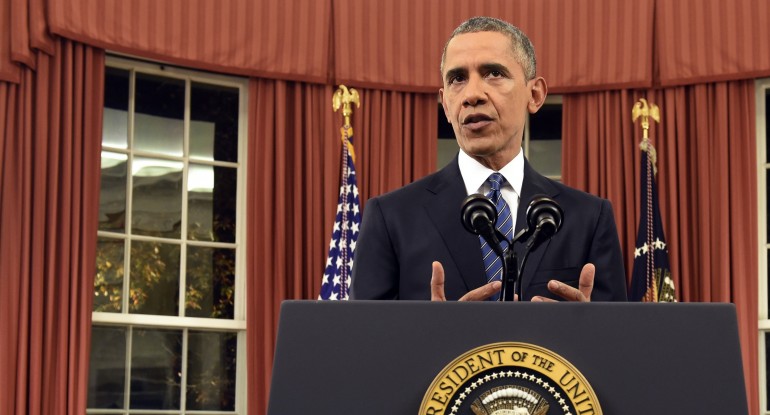 I was reading one of my favorite blogs this morning and saw this comment.

We just came from church service where we have San Bernardino police attending. We were told and I think it is important to share that the terrorists screamed “alahu akbar” several times while they were shooting; the FBI are preventing the police from going public with this information as well as the witnesses. BTW: My husband and I just got back from Washington, DC and were told by retired secret service that Obama has a Muslim prayer room in the White House. Not sure if this is well known. I had no idea.

The news media and the FBI, of all people, seem to be suppressing information.

Obama’s speech last night was weird. First, he was standing. Second, the only new information it contained was his statement.

That does not mean denying the fact that an extremist ideology has spread within some Muslim communities. This is a real problem that Muslims must confront, without excuse. Muslim leaders here and around the globe have to continue working with us to decisively and unequivocally reject the hateful ideology that groups like ISIL and al Qaeda promote; to speak out against not just acts of violence, but also those interpretations of Islam that are incompatible with the values of religious tolerance, mutual respect, and human dignity.

This sounds like he is finally recognizing that Islam has problems.

His proposed solutions are nonsense. One of them is delusional and no one will permit this to occur.

To begin with, Congress should act to make sure no one on a no-fly list is able to buy a gun. What could possibly be the argument for allowing a terrorist suspect to buy a semi-automatic weapon? This is a matter of national security.

The “No Fly List” is a list of people with no legal justification who are not permitted to fly on US airplanes. So far, we know that about half of them are there by mistake. We also know that 72 persons on that list work in the Department of Homeland Security. This is ridiculous. There is no incidence of a person on the no fly list who has committed a terrorist act or used a gun in a crime. The terrorists of San Bernardino were not on the list, or on any list of suspected persons.

Belmont Club, as usual, has a better explanation of what is going on.

“If you want to witness an adamantine mind at work, you could do a whole lot worse than observe the 44th president of the United States. Barack Obama is the most rigidly ideological president of my lifetime, a man who has a nearly blind adherence to a particular ideology (progressivism). It’s a disturbing, if at times a psychologically fascinating, thing to witness.”

What happens when such a person gains power ? Venezuela is one example.

The voters in Venezuela, after 17 years of voting Chavismo into power, believe they can vote Maduro out of office. The opposition may now have 113 seats in a 167-member assembly, a two thirds majority. Maduro gone, right? Well not necessarily. As the Chavista president reminded the voters: voting out socialism is no ordinary matter. Whatever you do, you can’t stop the revolution.

This is a variation “One vote, One man, One time.”

Nowhere is this more true than of Islamism. As Recep Tayyip Erdogan so memorably put it: democracy is like a bus. “Once I get to my stop, I’m getting off.” If Maduro is riding on the Bolivarian express, Erdogan is on the Caliphate Special. You can’t stop the music. Nobody can stop the music.

In reality we don’t have a conversation, we have a monologue.

Having looked indirectly at peripheral objects like Venezuela, the EU or Turkey, it may now be possible to see Barack Obama’s speech on the San Bernardino terror attack more clearly. For here the adamantine mind of the president is on full display. His superficial message is the same reassuring theme as always, along FDR’s lines of “the only thing to fear is fear itself.” Terrorism is not “between America and Islam.” Just give him more power and rest easy at home.

Yes, the caudillo will take care of everything. The result in Venezuela is that Venezuelans cannot buy toilet paper.

First Chavez destroyed the oil industry, by In February of 2002 he appointed a new board of directors to the PdVSA, which gave him control.

He used his control to impose political solutions that stripped assets and drove off oil workers.

Venezuela could potentially increase production capacity by 2.4 Mbbl/d (380,000 m3/d) from 2001 level (3.2 MMbpd) to 5.6 MMbpd by 2025 – although this would require significant amounts of capital investment by national oil company PDVSA. By 2010, Venezuelan production had in fact declined to ~2.25 Mbbl/d (358,000 m3/d). PDVSA have not demonstrated any capability to bring new oil fields onstream since nationalizing heavy oil projects in the Orinoco heavy oil belt formerly operated by international oil companies ExxonMobil, ConocoPhillips, Chevron and Total.

What does this have to do with Obama ?

What we need to do to stay alive, he says, is control guns, clamp down on social media, review the visa-waiver program. The fine print of the speech is such a negation of the soaring rhetoric that it might as well be from another speech.

A moment’s consideration of the speech makes it apparent that “the only thing to fear is not fear itself.” The main thing to fear is falsification. The administration is deathly afraid of admitting it got it wrong from the beginning. Or worse yet, admitting where it was going all along. That would ruin its aura of benevolent omniscience. Hope and Change in conflict with Islamism can neither be explained nor managed within the framework of the Narrative. The result is two messages in the speech: the pablum of the Narrative overlaid with the creeping fascism of the details.

Obama cannot admit he made mistakes. I cringed when Bush was asked what mistake he had made and could not think of one. Maybe this is a feature of the narcissism of politicians yet Bush was able to change course in Iraq when many others despaired. Obama does not seem to have this sense of reality.

Bit by bit the world is both shutting down and boarding up. For the first time in history, online sales to each in his atomized individual home outpaced sales from stores. “Friends and neighbors” no longer seek excitement in crowds, they hide and arm up, Obama’s assurances notwithstanding.

Opinions are only spoken in code — ask Loretta Lynch why. In a bizarre, almost surreal process we are told there are no enemies to fear even as we are warned to lower our voices lest we provoke that which does not officially exist — yet of which we are afraid.

The risk of such arrogant stupidity is coming home to almost everyone, even the fantasy obsessed left. The New York Times is even aware that all is not well.

The day before Thanksgiving, President Obama reassured Americans there was “no specific and credible intelligence indicating a plot on the homeland.” Seven days later came an explosion of gunfire and the deadliest terrorist attack in America since Sept. 11, 2001.

What may be most disturbing is not that Mr. Obama was wrong, but that apparently he was right. By all accounts so far, the government had no concrete intelligence warning of the assault on Wednesday that killed 14 people in San Bernardino, Calif.

The solution ? “Round up the usual suspects.”

14 thoughts on “What else are we not being told ?”