I have been considering “disruption”, including what is hype and what is real. Here is one on the cab industry where it occurred, in the electric and gas utility industry which has proven resilient in its current business model, and retail which is in the process of being disrupted.

My theory under these posts is that increasing supply (broadly defined) has been the key to whether or not “disruption” is truly real or not occurring. I don’t know if it will play out that way or not in the end but this is a starting point.

I have been interested in the airline industry for decades… in high school for my statistics class I built a model which correlated the profits of United Airlines with the price of oil. As an auditor and consultant I spent hours every week on a plane crossing the country serving utilities. And ever since I have traveled at least ten times a year for business or pleasure. So perhaps I would not consider myself an expert on the airline industry but certainly an interested observer.

The airline industry famously de-regulated in 1978. From 1978 to 2010 the airline industry added myriad new entrants and saw them fail along with much of the old guard. Wikipedia summarized this era here. In recent years, through bankruptcy and mergers, the US airline industry consolidated into four major carriers – American, United, Delta and Southwest. These four carriers control the vast majority of gates at major cities and effectively operate as an oligopoly. Now these four carriers are in rude health, as you can see in the stock chart below. Their stock prices have increased between 135% to 355% over the last 5 years. As an investor I bought Southwest after 9/11 and held on to it for years as the price languished; unfortunately I exited the stock before they became today’s oligopoly. 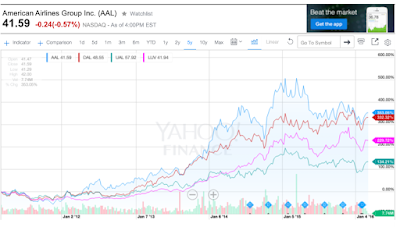 Another contributor to these gains is the collapse in oil prices. During the “peak oil” era, the airlines profits were strangled by the high cost of fuel – today they benefit immensely from today’s commodity price crash. This article describes how lower fuel costs saved them $4.3B in the third quarter 2015 alone and these lower costs have generally not come through to end users as price decreases – the airlines have banked the money or used them for dividends and capital improvements.

A major potentially disruptive force for the US airline industry are the new foreign carriers out of the middle east. In this blog post I describe how the airlines are using every trick in the book including appealing to nationalist sentiment to keep these carriers, which offer a much improved flight experience with new jets, out of the USA, in order to retain their cozy oligopoly.

This photo, which I took from a recent flight, is a complete anomaly – the plane was only about 1/3 full. When I used to fly frequently in the 1990s this was a common sight. In recent years, however, I am used to completely full fights where many can’t even fit their bags in the overhead storage bins and passengers on “standby” are left behind in the jetway. 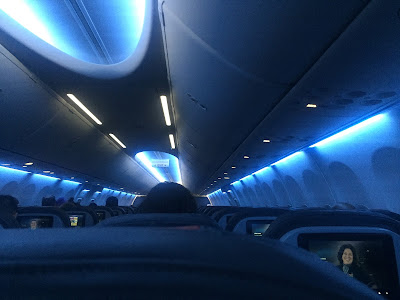 Airlines use technology and pricing to fill their available seats far more effectively. Their analytics let them plan flights more effectively in the first place and then they are able to use “variable pricing” to fill many more of the seats. Finally, the absence of upstart competitors and the fact that they control most of the gates in the largest and most popular airports allows them to force customers to take their flights in the first place.

Disruption, as defined in the modern, immediate context, is not happening to the airline industry. Here’s why:
1. Barring new entrants – Foreign carriers such as Emirates Airline, Etihad Airways and Qatar Airways have mostly been barred from offering flights within the USA. These airlines would provide fierce competition because of their newer fleets and higher levels of amenities
2. Lock up of infrastructure – by locking up gates in the major US airports, new entrants have a much more difficult route in becoming anything more than a niche player in the market
3. Lack of price wars – as oligopolistic competitors, the airlines certainly do compete on prices but are not launching the desperate fare wars that were common in the past. Instead, the airlines are using the proceeds to shore up their balance sheets and return cash to shareholders

The airlines also have benefitted from lower oil prices but these benefits would accrue to all industry participants, including new entrants. Likewise, the airlines benefit from new technology that enables them to efficiently sell tickets, sell upgrades, and communicate to passengers without adding customer staff (just try to get someone on the phone). Once again, these benefits would accrue to all participants. In the past an online reservation system or airline scheduling system was a technology marvel; while still a difficult system to run and construct, the technology to do this today is common and is much simpler than running Facebook or a real-time ad system by page views, for example.

13 thoughts on “Disruption – Part Four – The US Airline Industry”