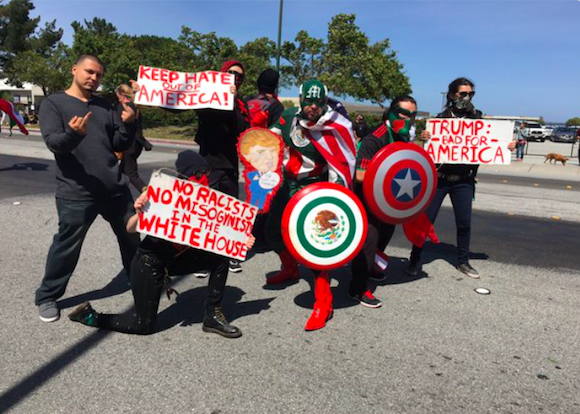 Earlier in the year, I predicted that a preference cascade is forming around Trump.

“This illustrates, in a mild way, the reason why totalitarian regimes collapse so suddenly. (Click here for a more complex analysis of this and related
issues). Such regimes have little legitimacy, but they spend a lot of effort making sure that citizens don’t realize the extent to which their fellow-citizens dislike the regime. If the secret police and the censors are doing their job, 99% of the populace can hate the regime and be ready to revolt against it – but no revolt will occur because no one realizes that everyone else feels the same way.

We are in a similar period right now. No one wants to put a Trump bumper sticker on their car because it seems an invitation to vandalism.

Siva is accused of slashing the tires of a Ford Focus and pouring yogurt into the car’s open sunroof while it was parked at a Gig Harbor Fred Meyer.

Police say Siva told them he attacked the vehicle because of the Trump sticker on the rear bumper. Siva allegedly told police he considered the sticker a “hate symbol” and vandalizing the car “improved the community.”

The victim of the crime is considered to be at fault because his bumper sticker was a “hate symbol.”

Rioters at the Trump rally in Costa Mesa California this week felt the same way. They showed their anger in obvious ways.

Protest organizers in Southern California said the anti-Trump demonstrations spread through word of mouth and involved mostly young people, including many high school and college students. They brought with them Mexican flags, which were once discouraged at immigrant rights rallies for fear they would be regarded as un-American.

The demonstrations outside the Pacific Amphitheatre in Costa Mesa on Thursday night blocked traffic and caused tense moments. Some protesters performed screeching burnouts in their cars or did doughnuts at intersections. Others kicked at and punched approaching vehicles, shouting expletives. Ranchera and hip-hop music was blasted throughout the streets. At least 17 people were arrested, and both a Trump supporter and a teenage anti-Trump protester were hurt.

No mention of payment but many of us believe these “demonstrations” are being funded.

What is particularly interesting to me is who is attending these rallies ?

I would like to have attended but I worked that day and was heading home when I heard about it. It was too late and I am not up to that much excitement at my age, anyway. What were the people waiting in line to attend like ?

As noted, the most interesting part of the rally proved the demographics: it was probably 60% women. Lots of minorities as well, plenty of people holding “Latinos for Trump” signs. It was a good mix of African-American, Asian, White, and Hispanic–everybody got along well. Over the loudspeaker, we kept hearing somebody saying over and over that if we saw protestors in the crowd, please do not touch them or say anything to them, just alert security by yelling “Trump! Trump! Trump!” Initially, I thought this was ridiculous, but it worked. Random protestors would get in with the rally crowd and start yelling, and folks would shout, “Trump! Trump! Trump!” The very efficient security personnel would escort the protestors out. No violence.

Doesn’t this sound like the Tea party rallies in 2010 ?

The national polls now show closer numbers and Rasmussen has them tied. Given what I believe is a Bradley Effect, in which people being polled may conceal their real choice to avoid being labeled bigoted by a pollster, I think we might be looking at a Trump landslide. I have wondered if he would implode at some point but I don’t see it.

I really hope the GOP Convention is not attacked by rioters and I do worry about assassination attempts but we will see how this goes on.

79 thoughts on “The Trump Preference Cascade is Moving Along.”