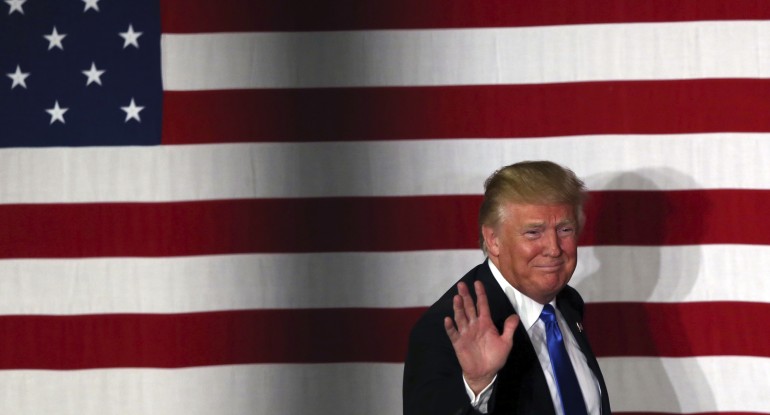 I’m starting to wonder if the Republican Party, that is the institutional party not the voters, really wants to win the election if it means accepting Trump as the nominee.

I was skeptical at first when it looked like Trump was not collapsing of his own weight.

About December, he began to look like there was a real chance of winning.

Now, after months of whistling past the graveyard of Trump’s seemingly inexorable rise and assuring themselves that his candidacy will collapse as voters come to their senses, a CNN poll released Wednesday showing Trump now lapping the field has the GOP establishment in full meltdown mode. The survey shows Trump with nearly 40% of the primary vote, trailed by Ted Cruz at 18%, Ben Carson and Marco Rubio tied at 10%, and the also-rans (including great GOP hope Jeb Bush) limping along far behind.

I am not a Trump supporter but I am intrigued at the steady progress he is making toward success.

I am still not that enthusiastic but it seems that he has attracted a large following of people who might be motivated enough to elect him president. The Republican Party seems horrified by the prospect.

This talk of ousting Trump as the nominee seems more likely to be a big flashing public signal to Trump to get his act together right away. (The smart lefty writer John Judis thinks Trump’s scripted speech Tuesday night is a sign he got this message.) If you were really going to depose Trump from being the GOP nominee in Cleveland, I’m not sure you’d go big with lots of public chatter about it as you’re seeing right now.

For example, Michael Mukasey a former Attorney General, has written a pearl clutching op-ed in the Wall Street Journal about Trump’s feud with the judge in the Trump U case.

Federal Judge Gonzalo Curiel, who was born in Indiana to parents of Mexican origin and belongs to an association of lawyers of Mexican origin, is sitting on a case in the Southern District of California that charges fraud against Trump University. Donald Trump in recent days has attracted much attention by suggesting that Judge Curiel should be disqualified for bias because the judge’s rulings are adverse to Mr. Trump and because, in campaigning for the presidency, the candidate has criticized Mexicans and proposed building a wall on the southwest U.S. border.

Mr. Trump’s claim against Judge Curiel is both baseless and squalid, but some in the chorus of critics are not themselves entirely without fault.

Not all agree with Mukasey.

Curiel served on the selection committee in 2014 for the La Raza Lawyers of San Diego Scholarship Fund. Six of seven of the recipients of these scholarships ranging from $1500 to $1600 were born in Central America. One of them, Ricardo Elorza, described himself as “undocumented.”

“What happens is the judge, who happens to be, we believe, Mexican, which is great. I think that’s fine,” Trump added.

I think Trump was inartful in his statement but, is he so wrong ? A scholarship for an illegal immigrant student might suggest bias against Trump and his emphasis on illegal immigration.

Mukasey again. Whether they know it or not, judges demonstrate symbolically every time they mount the bench that personal considerations have no place in deciding cases.

If only that were true.

The left seems to understand what is going on.

Never Trump Republicans like Bill Kristol, and whoever else would rally behind French’s potential third-party candidacy, do not take the presidency as seriously as they claim to: If they did, they’d admit that they find Hillary Clinton to be a better choice than Donald Trump.

There seems to be no doubt on the Democrats side in spite of all the baggage that Hillary brings.

Even those who should support the nominee seem doubtful.

The reluctant Trump supporters in the upper echelons of the GOP keep expressing surprise and/or dismay at the fact that Trump hasn’t toned things down or been “reined in” yet. If they truly thought this was a possibility, it’s further proof that the party has transcended clueless. Trump is a 69-year-old man who has never had a filter, he isn’t going to develop one overnight, especially simply because some people he deems inferior are exhorting him to.

I don’t think Trump believes the “donor class” is inferior. He probably knows most of them think he is “inferior.”

The portion of the electorate that has propelled Trump to this point are attracted to the very things that the “Harumph!” wing of the GOP finds problematic. When they say they want him to be more of what their vision of a proper candidate is, they are asking him to do a 180 from the version of him that his supporters love.

It isn’t just the Trump faithful who are in love with the lack of a connection between Trump’s brain and mouth, however. Trump himself sees it as an asset. He is very much adopting an attitude of, “If it ain’t broke, don’t fix it,” now. He’s earned the right. The idiots who let him rise to power have no real basis for their claims that he needs to be the kind of candidate they view as a winning candidate.

That’s largely because they rarely win.

The left is already planning to describe him as mentally unbalanced, as they did Goldwater.

In a speech last week, Hillary Clinton took her befuddlement with Donald Trump and dropped it squarely at the feet of America’s mental health professionals. “I’ll leave it to the psychiatrists to explain his affection for tyrants,” she said, in response to comments Trump had made marveling at the political effectiveness of North Korean dictator Kim Jong Un.

She’s not the first person to suggest the Republican presidential candidate could use a session on the couch. Back in November, Vanity Fair got five psychiatrists and psychologists to weigh in on Trump’s mental health.

Goldwater did not fight back. Trump does and that is why his supporters love him.

Also, the political left is doing a good job of explaining why we should choose Trump.

Much more about the city sanctioned riot at the Trump Rally here.

San Jose is a sanctuary city for illegal aliens. Remember, all of these videos took place within sight of the San Jose police department, the police officers therein, and the San Jose police Chief Eddie Garcia. According to his own statements, Chief Garcia spent two full days preparing his officers and leadership for the event. He was right there on scene, at the mobile command center. Garcia watch this all as it took place.

It’s pretty clear the rally-goers were set up. Here is an eye witness account.

The Trump event attendees were forced to walk past the protesters afterward, after the event was over, to get to their cars. Broad areas of sidewalks and streets, that were not blockaded before the event started, were blockaded by barriers after the event ended, and standing in front of those barriers were lines of individual police officers telling Trump event attendees what route to follow to get to their vehicles.

I had parked in a parking garage right next door to the event. Before the event, an easy walk to the event, after event over, had to square 4 blocks of sidewalk lined with protesters who somehow knew the exact route that Trump supporters/event attendees had to walk, and were waiting for them.

But the GOPe is planning to try to wrest the nomination away from him at the convention.

Is there a better definition of a suicide pact ?

25 thoughts on “Does the Establishment GOP Want to Win This Election ?”