Following up on the second item of my Risk Register and its recommended strategy for reduction, what ought we to do as individuals or households to prepare? It occurred to me to throw some project-management techniques at the problem. Let’s begin with a drivers-and-restrainers exercise, “drivers” being reasons that support taking an action, and “restrainers” being reasons that hold you back from taking the action …

Given the above—not exhaustive!—lists, what does the classic Triple Constraint of scope, time, and cost look like for what I’ll call Project Lockdown Reprise?

Colloquially, it’s “good, fast, cheap—pick any two.” I’m going to make this exercise somewhat easier by specifying the schedule, so at least we’ll know how fast we have to act. My, er, drop-dead date is the end of November, which this year is the Monday after Thanksgiving Day weekend. I assume full NPI reactivation then or very shortly thereafter (including, for churches, nearly all of Advent season) … except that next time around, long outdoor walks, etc, aren’t going to be so much fun. Morning low temperatures where I live were at or below freezing, ranging as low as 17°F, for 23 out of 31 days last December, which is also unsurprisingly the least sunny month of the year.

But with regular flu season starting in October, signs of impending difficulties may be evident nearly two months earlier than this. So you’ll want any relatively challenging items in place, or at least well along, by the end of 3rd quarter 2020. Backing up from that, figuring in lead delivery times, stocking up begins while it’s still summer.

Scope is mostly about what to stock up on, but also about other preparations. To name the obvious American example, quite a few of us, myself included, need to get our BMI below 30. Yes, I know that it’s an imperfect measurement, particularly if—again, like me—you’ve already taken measures to convert a significant amount of body fat to muscle. But it’s still a good number to shoot for.

Those over 65 will need to think carefully about what might be involved in not being around younger people, and what arrangements they will need to make for both material provision and a decent level of human contact. I mention this not only because of the sharply increased risk with age characteristic of the virus, but because the only decent long-term restriction I can think of is strict segregation of the elderly, as with the early-morning “senior hour” at grocery stores, but in all public accommodations. We may see restaurants, entertainment venues, etc remain open but with certain days or evenings reserved for seniors, with thorough sanitizing immediately beforehand and no younger people (other than employees) allowed in; conversely, seniors not to be on the premises at any other times.

What I mean by “decent” in the preceding paragraph is a combination of feasibility and effectiveness. Depicting that as a quadrant diagram: 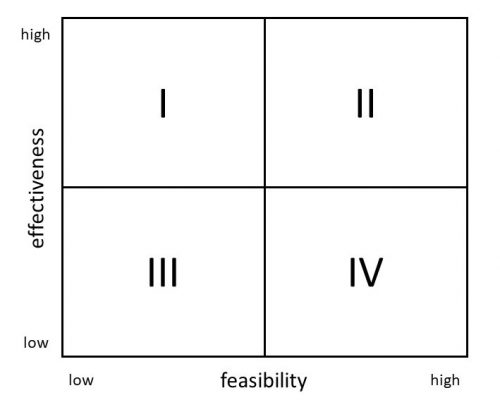 This model might be applied to many things, including the supposed enforceability of “stay-at-home” orders, but for now, just shoot for Quadrant II in your own preparations. What can you most easily do in the limited time—and with limited funds, discussed below—that will bring the most benefit?

Back to stocking up—regular flu season peaks from December through February (thus my EOM November milestone above). You may need three full months of non-perishables … and arrangements to obtain perishables at least half a dozen times during that interval. This will mean a careful inventory well in advance; by the time you notice something getting low, it may be too late to avoid a stretch of doing without it. I suspect that nearly all of us have many such just-in-time habits and will be getting some sharp lessons in how to supplant them with more adaptive behaviors.

Among those more adaptive behaviors will be seeing to the health of one’s personal network at least as assiduously as the health of one’s person. Do you know your immediate neighbors? Are there people you can call—and who can call you—in an emergency? Do you maintain regular contact in less stressful situations? The average number of close friends Americans have has been reported as various pitifully small values, especially for men (and, I’m afraid, follows a power-law distribution, such that only a few percent have as many as five people they can discuss important matters with).

And finally to cost. For many of us all this will be no more difficult than some mouse clicks along about August, but for others it will be far more challenging—unwilling diets at a BMI already far below 30, thermostats at 60°F in January, desperate negotiations for rent, steadily deepening holes of credit-card debt. With a nod to antifragility, some things to avoid, albeit mostly at longer timescales, are:

And to embrace: gamifying budgeting à la Dave Ramsey; simplifying your tastes to the verge of asceticism; building up margin (including other than financial margin; indeed, emotional energy may be the most valuable commodity in the winter of our reprise); and deliberate assistance to those less fortunate. The good news is that you probably have more slack to be taken up than you think, and it can all become available to match the need of the hour. But now is the time to begin crunching those numbers. In this scenario, we’re four months away from stocking up and seven months away from the next roller-coaster ride. Use it wisely.

3 thoughts on “The Triple Constraint and the Next Wave”